Written by Betsy Barnett on 15 July 2020. Posted in Sports 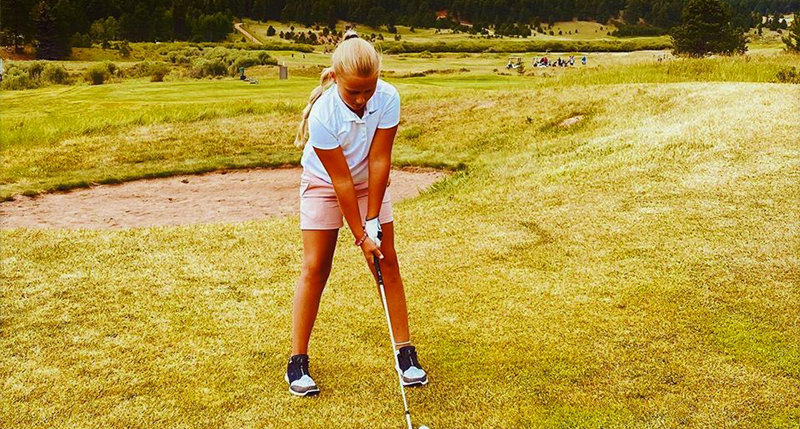 The U.S. Kids Summer Golf Tour is nearing its conclusion and the competition continues to be impressive especially in the Girls 10-11-year old age division where four players, including Reese Barnett of Eads, are leading a large pack of golfers for the Tour Championship. This weekend, nine-year-old Barnett won the 10-11 division at the Shining Mountain Golf Tournament in Woodland Park, Colorado coming in at an even par 36 on the difficult mountainous course.

Barnett placed second on June 28th at the Applewood Golf Course in Golden, Colorado shooting a +2 over 38 being one stroke behind Sophia Lee of Centennial who came in with a +1 over 37.

On Sunday, Barnett put together a beauty of a round and held off a strong golfer in Addison Dorsey from Colorado Springs who was one back with a 37 performance. Lee came in third with a +2 over 38.

Barnett was on for a Birdie or an Eagle on all but one hole but putting on the slopes proved to be somewhat difficult at times. However, she did manage two Birdies, both on par 5 holes, to gain the advantage over the tough field.

“It was a pretty tough course with lots of trees, but I managed to stay in the fairway which helped a lot. Also, I tried to concentrate on not blowing my long putts off the green,” Reese said with a smile.

There are two more tournaments left in the U.S. Kids Summer Tour including a tournament at Thorncreek Golf Course in Thornton next Sunday. The Tour Championship will be held at Meadow Hills Golf Course in Aurora on July 25th.

However, Reese says she’s looking forward to golfing with her Papa, Randy Holmen, and dad in the Two-Man-One-Woman Scramble Tournament sponsored by Eads Golf Course coming up this weekend.