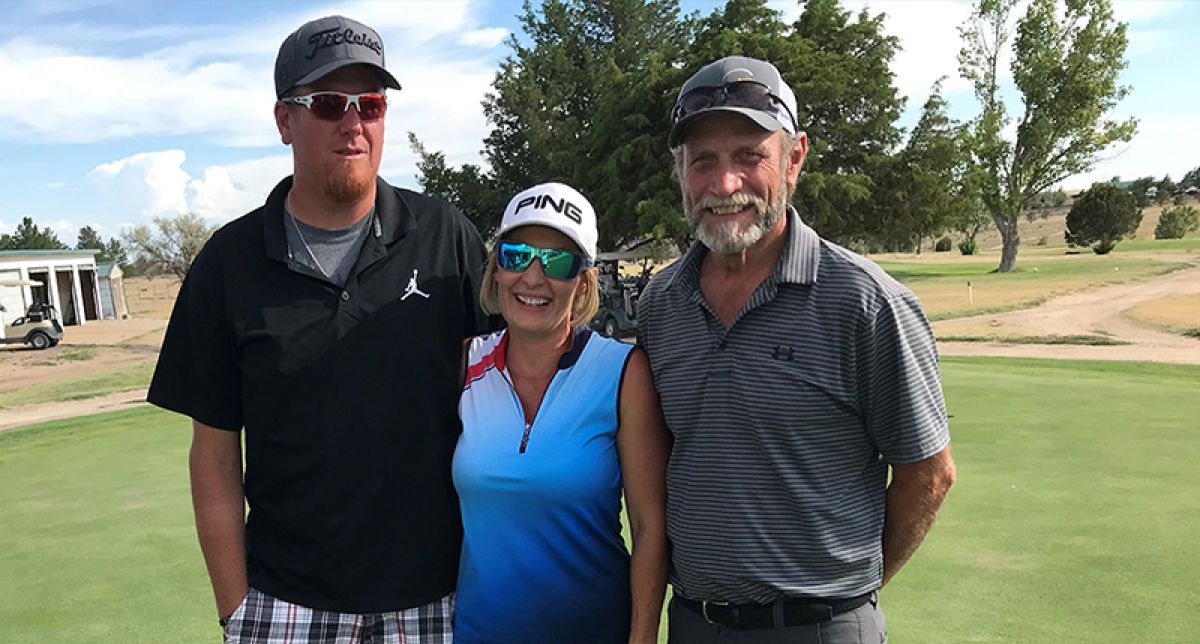 The popularity of the sport of golf at the Eads Golf Club continues to rise as many people are finding it’s a sport that affords great exercise, and more importantly, a sport that can safely be done during a pandemic. Perhaps that’s one of the reasons why 96 golfers showed up on Saturday at the Eads Golf Course for the annual 2-Man-1-Woman Scramble Tournament.

The Tournament consisted of four flights of competition. Each team had three members including, obviously by the title of the tournament, two men and one woman. The rules required that each player’s drive had to be taken at least twice in a nine-hole round of golf, after which the team could play the best ball during the hole. Each team played two rounds, or 18 holes during the tournament.

In the Championship Flight there was a three-way tie for the tournament title between teams from Cheraw, Flagler and Cheyenne Wells with all coming in with -8 under par 64 in the 18 holes of play. According to tournament officials, a playoff between the three teams was not actually played, but rather the playoff consisted of a “card playoff.” Meaning a head-to-head score matchup per hole starting with Hole #1. The team from Cheraw consisting of Angie Leake, Colin Leake and Rod Soden came up with the win as they had a birdie on Hole #3. In second place was the Flagler team of Julie Witte, Dave Weiser and Tony Ford who won the head-to-head score on Hole #5 with a birdie. The Cheyenne Wells team of Kendra Noe, Quade Pelton and Craig Smith settled for third.

The best Eads team in the Championship Flight was the trio of Reese Barnett, Kyle Barnett and Randy Holmen who were one back off the leaders shooting a -7 under par 65.

The First Flight was won by the Eads team of Stephanie Bohlander, Brian Bohlander and Trey Eder who came in with a scorching -8 under par 64. The trio had struggled a bit on the first round with a -2 under 34, but a 30 on the back nine was enough to win the flight. Three groups tied with a -7 under 65 in the tournament, and again, were left to compare scorecards for placing. In second place would be the trio of Lana Shelberg, Brian Shelberg and Chase Shelberg of Lamar who won it on the first hole with a birdie. In third was the team of Haley Johnson, Brad Johnson and Ty Trahern from Kit Carson placing with a birdie on Hole #2. Left out in the cold on the playoff was the third team to tie, Kayla McLoud, Justin McLoud and Cody Cordova of Eads.

The Third Flight was a large flight of 10 teams with the Kit Carson team of Stephanie Framel, Robert Framel and Jim Trahern coming in with the win shooting a -3 under par 69. In second place was the team from Eads of J.C. Sobotka, Zach Haase and Jay Haase shooting a -1 under par 71. Earning the final place of the day was the Eads team of Braylynn Eder, Nick Eder and Dillon Dietz coming in with a +1 over par 73.

All in, the 2-Man-1-Woman Tournament is always a fun time for golfers to team up and enjoy the game while still playing some highly competitive golf. The next tournament for Eads will be the greatly anticipated Two-Man Scramble on August 1 & 2. This is a two-day tournament consisting of a total of 36 holes of tournament play that includes hole and skin prizes both days. On Saturday night there will be a supper and Calcutta event. The cost to enter the tournament is $120 with the tournament beginning at 10 am on Saturday, August 1 with a shotgun start.

Cover: The Champions of the Two-Man-One-Woman Scramble Golf Tournament at the Eads Golf Course on Saturday was a team from Cheraw who won in a three-way tie-breaker. Pictured are (l to r) Angie Leake, Colin Leake and Rod Soden