14U HIGH PLAINS GROUP GIVE KANSAS ALL THEY CAN HANDLE

Written by Coach Dayne Eaton on 30 July 2020. Posted in Sports 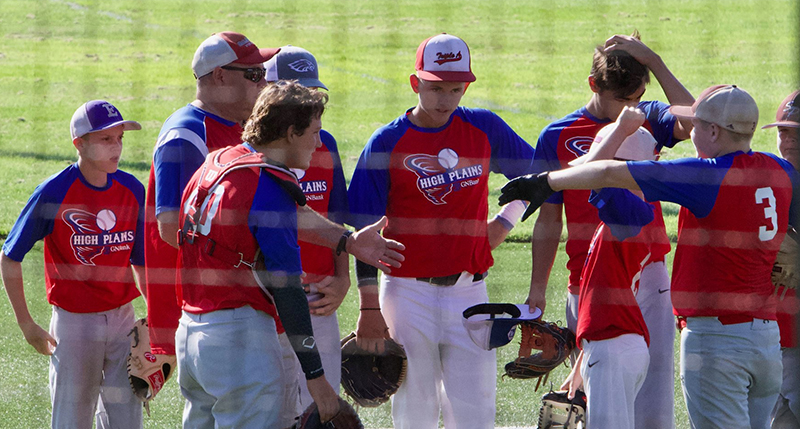 The High Plains 14U baseball team entered the Garden City Grand Slam Tournament to close out the 2020 season. The High Plains team drew the home teams of GC Sluggers and GC Venom in pool play on a hot windy Saturday. The games were played in the refurbished Clint Lightner Field in the shadow of the Garden City Zoo. "I liked playing on the synthetic surface, as it makes me feel like I'm in the big leagues." said Spencer Uhland.

In the first game of the tournament High Plains faced the seasoned Slugger team who recently placed fourth in the Independence, KS Showcase with 24 teams. Keean Bandy from Limon started the pitching off for HP with a very efficient 3 innings. He gave up 4 hits and 3 runs with 3 strikeouts and 2 errors behind him. The real drama came in the final inning with High Plains trailing 4-6. The Sluggers had brought in their hard throwing ace to close the door. Devin Eaton from Holly started the rally off with a single to center field. Then Bandy stroked a double to deep left field. Maddox Coleman from Granada followed suit with a shot to right field scoring two runs. Spencer Uhland from Eads popped one over the first baseman's glove and HP had taken the lead. A line drive by Mathew Guiterrez from Burlington scored Uhland and the game was called for time limit. The High Plains team snatched the victory with a walk off rally in the bottom of the sixth inning.

The second game of pool play pitted the High Plains boys against the Garden City Venom. The High Plains momentum carried over from the first game with stellar hitting from Evan Larrick from Wiley and Jordan Rockwell from Limon leading the way with three hits apiece. The High Plains team rode the arm of Maddox Colemen who seemed to keep the Venom in the dugout for the first three innings. With the High Plains Twisters leading 9-3 the game seemed to be over by time limit, but the Venom managed to sneak in one more inning. The Twisters added to the lead with some smoking bats putting up one hit after another. Mathew Guiterrez was running out of gas and Venom was able to push across a couple runs to make it a respectable 13-6 score. "We played really great defense today and limited our errors. When our sticks get hot, it is a lot of fun scoring 13 runs in a game,” beamed coach Chance Fowler following the second game.

The High Plains Twisters became the #1 seed going into tournament play on Sunday. In a twist of fate, the Lamar Savages baseball team was able to upset the good GC Sluggers team and push them to the #4 seed. This set up the rematch. The HP Twisters were able to scratch out an early 1-0 lead over the Sluggers’ ace chucker going into the third inning. That's when things got ugly for High Plains. "We had some errors, some walks, and they are good hitters," explained Coach Dayne Eaton about the disastrous inning. Giving up six runs seemed to take the fight out of the players.

Then just like the first meeting of the two teams, momentum swung in the favor of High Plains adding three runs to answer the Sluggers’ big inning. Going into the last inning the score was 6-4 and the Twisters were rallying. Larrick came in relief in the top of the sixth. He fanned the first batter and issued a walk, fanned the next hitter and then gave up a hit down the third base line to plate one more for the Sluggers. Larrick then struck out the next batter for three outs. It was do or die for the Twisters. Rockwell flew out for the first out. Eaton got a single to right field. Putting the pressure on the pitcher, he overthrew the pick-off attempt at first base but the ball took a fortuitous bounce for the Sluggers and they were able to catch Eaton in a rundown that would result in an out. With two outs and little hope the High Plains team did what they do best. They battled. Bandy hit a shot to left field, and Larrick had a line drive up the middle. Coleman burned the left fielder and scored two runs. With the score getting tight at 6-7 Will Pacino from Wiley came to plate. He had just had a great hit in the last inning, so he was confident, and the tie run was on second base. Will fouled off a couple breaking balls then hit a line drive scorcher. The second basemen slapped it around and finally threw it to first to end the game by a step.

"It was a great two-out rally and we just wish we got one more inning. These kids just don't ever quit. I am really proud of them and saw a ton of growth this summer and we had a lot of fun," reflected Coach Dayne Eaton following the loss.

Eaton also added that his personal Gold Glove award would have to go to Brentley Lening at second base who had the highest fielding percentage in the four games.

The GC Sluggers went on to defeat Lamar 12-1 in the championship game.