Written by Betsy Barnett on 30 July 2020. Posted in Sports 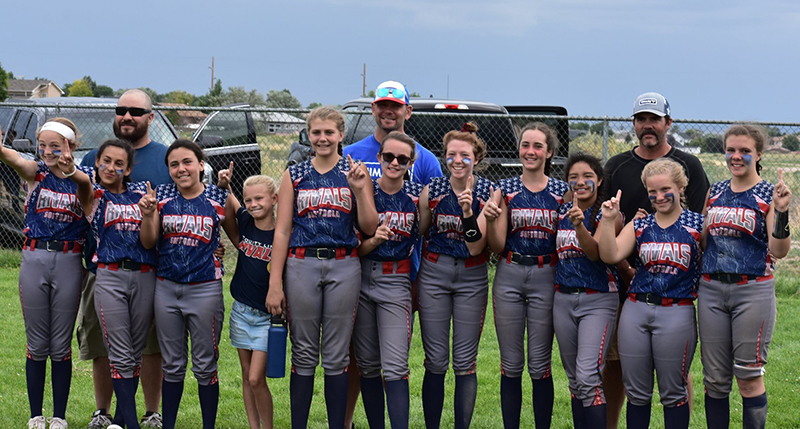 The Rivals 12U team continues to improve and over the weekend put together a series of games that awarded them their first tournament championship of the season. The players on the Rivals’ team represent a number of communities including Eads, Wiley, McClave and Lamar. They traveled to Pueblo West over the weekend for the Undercover Tournament where they competed with mostly 14U teams from the Arkansas Valley and Pueblo.

The team started out on Saturday morning with a loss in the pool play to the Pueblo Lil Rocks losing in a 5-2 barnburner. But, after that loss, they settled in and won the rest of their pool games on Saturday including a 21-3 victory over the Pueblo West Blue Thunder and an 8-2 win over the Arkansas Valley Bandits from La Junta. Their strong Saturday results put them in the semifinals of the tournament bracket on Sunday where they first took out a little revenge on the Pueblo Lil Rocks winning 11-5. They then put together a strong game winning in the championship over the Ark Valley Bandits, 7-6, when Bailey Sierra hit a long single that scored two winning the game.

The Rivals fell to the 14U Pueblo Lil Rocks in the opener 5-2 on Saturday morning despite outhitting them seven to four. 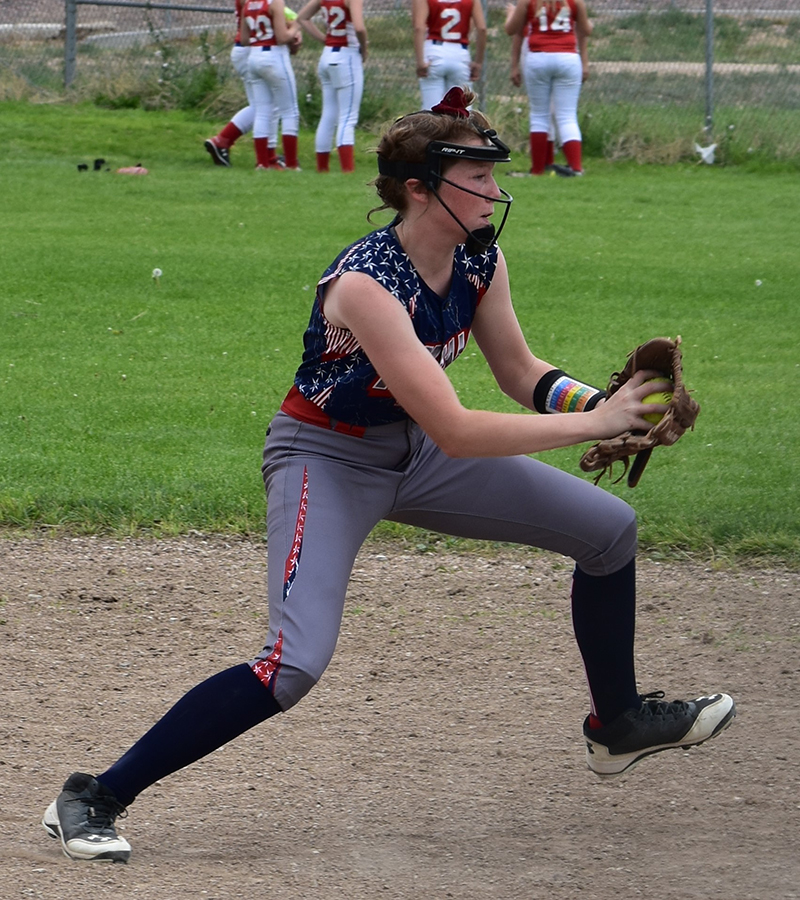 In the first inning, the Rivals got started with a Dixie Bitner single that scored Khloe Fernandez who was in scoring position off a single and a stolen base to second. Sierra started in the circle for the Rivals striking out 4 and giving up five runs on four hits. She did a good job of generally keeping the Pueblo batters off balance. The Lil Rocks tied the game in the first and then went ahead in the second and third with a run in each inning. Going into the fourth inning the Rivals managed one more run when Kara Wilson scored on an Anna Wollert single.

Khloe Fernandez led the Rivals going 2-for-2 at the plate. Defensively, the Rivals did not commit a single error with Dixie Bitner making five put outs.

That was a disappointing loss as the team played well enough to win. However, they recovered in a big way in their next game on Saturday afternoon playing with some passion and having a statement to make. They would devastate the 14U team from Pueblo called the Blue Thunder, 21-3. Khloe Fernandez started in the circle for the Rivals and had a strong first inning with two strike outs. The Blue Thunder would score in the second inning after she walked the first two batters. Anna Wollert then came out of the bullpen to finish the game giving up another run and walking two.

But the story for the Rivals was at the plate as they scored 21 runs on 16 hits including a triple from Wilson and a homerun by Sierra. The Blue Thunder struggled mightily with their defense giving up multiple walks, hit by pitch runners, and five that arrived on errors. Wollert, Sierra, Maddie Wertz and Mady Daniels all scored three times while Fernandez, Bitner, Kara Wilson and Zoie Martinez scored two runs apiece. Overall, the team had 18 RBIs, 16 hits and 9 stolen bases.

That big win was a confidence booster for the girls who had one more game to go on Saturday night. This one would be against their nemesis from La Junta, the Ark Valley Bandits. This would be a solid win for the Rivals coming through with an 8-2 advantage. Fernandez and Wollert worked the circle for the Rivals with Fernandez giving up an early run to the one-hole batter on a hit by pitch. But after that she settled in and struck out one, walked one, and gave up 2 runs on 3 hits. Wollert gave up one more run off of 2 walks, but her strong speed from the mound was enough to keep the batters from La Junta off balance.

Offensively, the Rivals rattled off 9 hits including a triple from Wilson and another by Martinez. They would score in every inning. In the first stanza Fernandez led off with a single and Bitner was hit by the pitch to put two aboard with no outs. Wollert hit a strong single that scored both Fernandez and Bitner. In the second inning the Rivals scored six runs that started from the bottom of the order. In that one Maddie Wertz led off with a single followed by Daniels with another single and Melanie Salcedo drew a walk to juice the bases. Lexi Shotton then came to the plate and hit a two-run single. Fernandez then hit in Shotton with a single. With two outs Wilson nailed a strong triple scoring Fernandez. Wollert then arrived on an error to put two aboard for Martinez whose triple scored both Wilson and Wollert.

The strong pool play record on Saturday gave the Rivals a reprieve in the quarterfinal round of the tournament. In the semifinals they would take on the Pueblo Lil Rocks, the only team that had beaten them in the tournament thus far. However, the Lil Rocks was out of pitching and the Rivals were ready to get their revenge advancing to the championship, 11-5.

In that key contest, the Rivals threw their power behind two pitchers including Sierra and Daniels. Sierra got the start but had a rocky first inning giving up all five of the runs the Lil Rocks would get in the contest. She would, however, get three strikeouts to hold down the bleeding. Daniels came in the second and third innings and held the Pueblo West 14U group scoreless giving up only one hit and no runs. But the bats were strong behind the Rivals’ defense as Bitner came out swinging with a single to start and Wilson added a second single putting two aboard. Martinez would bring home Bitner with a strong double to centerfield. After the first inning the Rivals were behind 5-1, but they continued to battle at the plate and by the second inning they had knotted the contest, 5-5. In that inning Daniels, Salcedo, Shotton and Bitner all scored. Then the Rivals turned the cranks up on the Lil Rocks in their final at-bat scoring six runs using five hits and some aggressive base running. Wollert started out with a single followed by Martinez and Sierra to juice the bases. Wertz then hit a back-breaking double that scored two. Sierra and Wertz would score off a single by Salcedo. Shotton joined Salcedo on the base pads arriving on an error by the pitcher when she laid down a beauty of a bunt. With two aboard, Bitner’s single brought them in. Wilson went 3-for-3 in the game while Wertz and Shotton each went 2-for-2.

That revenge win pitted the Rivals against the Bandits who had worked their way to the championship game on the other side of the bracket. The Rivals took this game in dramatic walk-off fashion, thanks to a single at the end of the game by Sierra and some heads up base-running by Martinez. The Rivals were trailing 6-4 to start the Rivals’ bottom of the sixth inning at-bat. Fernandez drew a walk and Bitner moved her to home on a double. The scored was 6-5. With two outs Wollert walked and represented the tying run. Martinez then got on with a good single adding another to the base pads. Martinez represented the winning run at first with two outs on the field. Sierra then took a strong hit to deep left field scoring both Wollert and Martinez for the exciting championship win.

Wollert started in the pitcher’s circle for the Rivals and gave up five runs on six hits over a full six innings of play. The hard-throwing right hander struck out an impressive 13 batters. Bitner and Wilson managed multiple hits in the contest with two apiece. A key part of their win was their baserunning as four players stole at least two bases and Wilson stole five.

It has been a fun summer of tournament play for the 12U Rivals. As school looms ever closer the Rivals are looking for one more tournament. If they find one the rest of the field should be ready for a strong hitting and aggressive group that has improved dramatically throughout the summer.