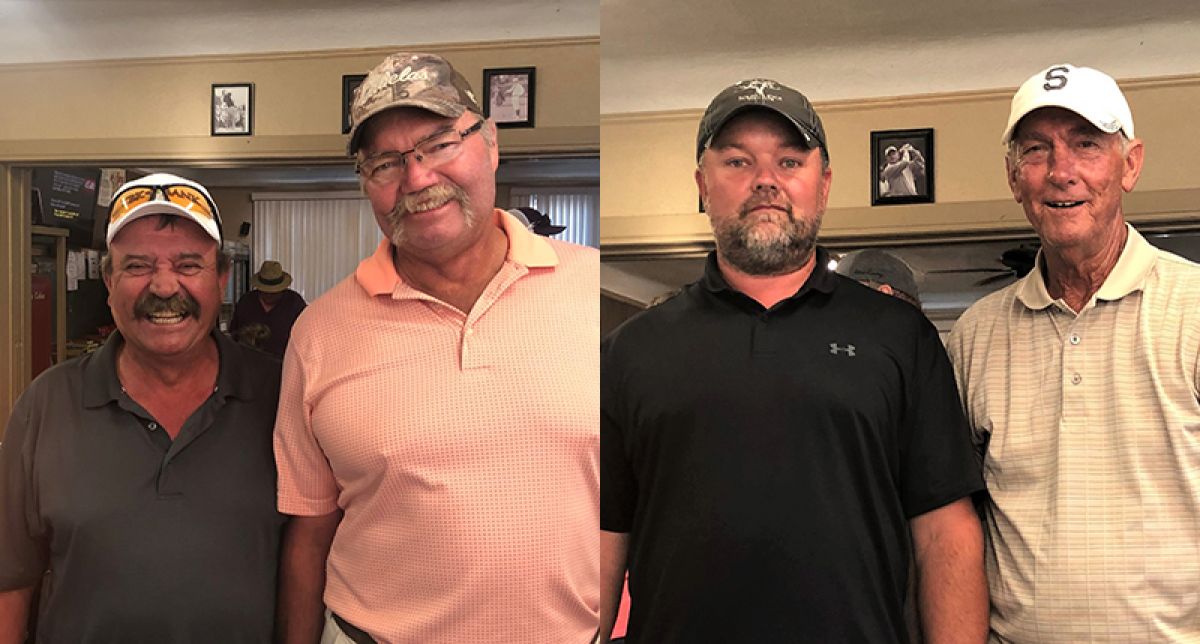 In last year’s Two-Man Scramble two-day golf tournament held at the Eads Golf Course, the team of Ryan Wyatt and Gail Crawford blew away the competition by six full strokes shooting an incredible -16 under 128 for the 36-hole tournament. This year’s version of the tournament saw more golfers and tougher competition that pushed the duo to an even more impressive championship score of -17 under 127 which was three strokes better than the second place team of Kyle Barnett and Sean Oquist who came in with a -14 under 130 for the tournament.

It’s an event that local golfers look forward to and when the two days of golf ended, two legendary local golfers, Gail Crawford and Ryan Wyatt of Eads, emerged as the clear tournament winners for the second year in a row.

The Two-Day-Two-Man Scramble Tournament features a heck of a lot of golf, a Calcutta that can mean some good money, and a fantastic dinner put on by the Eads Women’s Golf Association on Saturday evening. Last year featured 33 teams in the big tournament but this year there was an even 40 teams competing for some good return on the entry fee.

On Saturday the teams played 18 holes of golf that not only positioned them in the tournament flights but also helped to determine whether the team is a good investment for the Calcutta side of the tournament. Crawford and Wyatt had their best round of the tournament right away in the front nine shooting a -6 under 30. They came back with a -3 under 33 on the back nine and put themselves in the lead after the first day. As the leaders they spotted everyone in the Calcutta with a -10 under 62 first day performance.

The team of Neil Richardson and Brian Bohlander shot a -7 under 65 on day one, with Barnett and Oquist right behind them with a -6 under 66. Ten teams ended up in the Championship Flight after the first eighteen holes with the top team leading by 8 strokes over the bottom team in the flight.

On the second day of 18 holes it would be Barnett and Oquist who challenged with the best round of the day shooting a -8 under 64. However, Crawford and Wyatt stayed tough and held off the Barnett/Oquist team with a couple of birdies on the last two holes. Barnett and Oquist settled for second place with a -14 under 130. In third place and in the money was Richardson and Bohlander coming in at -13 under 131. Barnett and Oquist came in first in the Calcutta but tied with three other teams resulting in the four teams dividing out the entire pot. They were Monte Crawford and Michael Gonzales (-8 under 136), Curt Connelley and Jason Dechant (-6 under 138); and Robert Framel and Jim Trahern (-6 under 138).

The team of Kelly Wollert and John Philpy would win the First Flight tournament with an overall score of -4 under 140. On the first day, they led with two other groups, but came back on day two with a -3 under performance for the win. Dusty Shipman and Ryan Stubbs came in second place in the First Flight shooting an even par 144. In the money in third place was the Eads duo of Larry Gifford and Tom Richards who also came in with a 144 even par performance. Winners of the Calcutta portion of the First Flight included Gifford/Richards in first place, followed by Wollert/Philpy in second place and Shipman and Stubbs in third. Those three teams saw some good return on their investment to be sure!

The Second Flight portion of the tournament turned into an accountant’s nightmare as four teams tied for the top position with only three spots that paid out. That meant that someone would be left out in the cold. The overall winning score was a +4 over 148. Winning the tournament on the tie breaker was Leo Hurtado and Randy Bogenhagen. Coming in second would be the father/son due of Frank Miller and Brian Miller. And the final winning slot for the money paid off to Michael Pelton and Joe Chadwick, from Cheyenne Wells. Left out of the money but with a strong performance was the Lamar team of Mauch and Neill. Six teams also shared the Calcutta money as this was a most competitive flight.

This tournament was so big that the Eads Golf Course could sponsor a Third Flight with three winners in the scratch game and 3 more in the handicapped Calcutta. Winning this flight would be the team of Oxley and Tefertiller from the Holly area coming in at a very decent +10 over 154 in the 36 holes of golf. Coming in second place was the team of Don Duran and Hanigan from the La Junta area. That duo was a full six strokes back with a +16 over 160. The final payoff went to Loren Patterson and Monte Richardson from Eads who came in with a respectable +19 over 163. Winners of the Calcutta were the brother duo of Joe and Zach Haase. The pots for second and third were split with a tie between Oxley/Tefertiller and Duran/Hanigan.

This particular tournament held up to its hype as the golfers had a tremendous two days of golf, enjoyed some strong competition, even better food and some even turned the weekend play into a little bit of a payoff. The Eads Golf Club now gears up for the Seniors Two-Man Scramble Tournament this Friday and the Two-Woman Scramble Tournament on Saturday.