Last week, thousands of athletes, coaches, parents and fans from across the state of Colorado waited for days to see if CHSAA, the organization behind high school activities in Colorado, would fight for the kids’ opportunity to play sports in Colorado. CHSAA worked directly with Governor Jared Polis who has in recent months taken on more strict control of freedoms for Colorado citizens through COVID-19 responses. Those waiting to hear were even prepared to deal with a mask mandate, put in place in the middle of July, if they could only just play fall sports. Finally, nearly three full days later than anticipated, CHSAA came out with their mostly criticized plan for preps sports in Colorado. And, if it was controversial to urban and city schools, it was a downright disaster for kids and programs in small towns across Colorado.

In what can only be construed as political maneuvering, CHSAA opened up a small handful, four to be exact, outdoor sports that are traditionally fall sports. That group of four sports would be referred to as Season A. Further, they closed off the rest of the sports and activities until January as nearly every small school in the state is in the process of opening their doors for face-to-face instruction. They will now be forced to go an entire semester before they can play anything that has traditionally been offered in small schools. CHSAA could have done better for small schools. And still should. 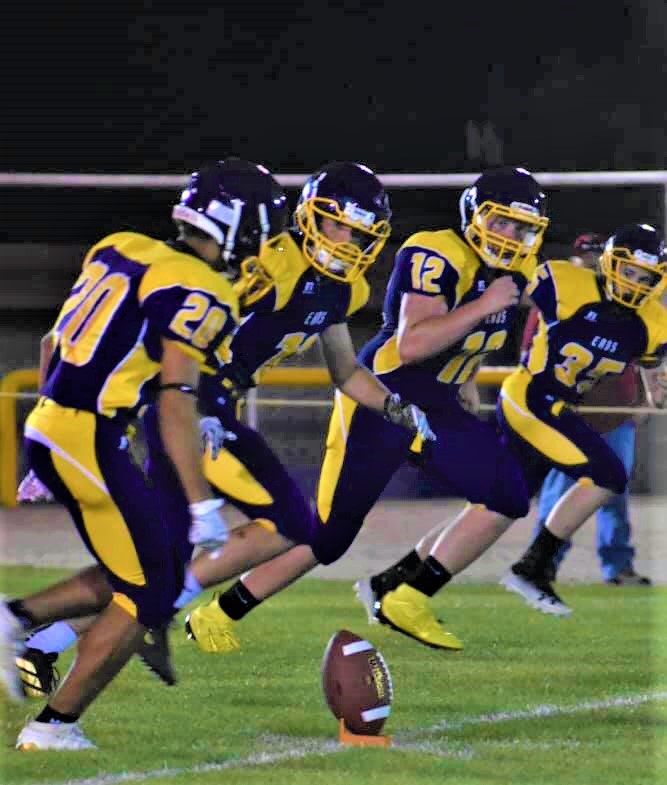 Further, Season B will include the traditional winter sports that normally begin in late November beginning now in January. Basketball and Wrestling will run for eight weeks from January to the beginning of March. Season B and Season C will then cross over as from late February through late April, again another eight weeks, the normal fall sports of Football and Volleyball will be played. Finally, the spring sports of Baseball and Track will just be getting underway when the small school graduation season begins, and schools are letting out for summer. This means for athletes that are in baseball and track their season will run well into a third of their summer vacation to the very end of June.

Boys tennis and softball teams began practice on Monday, marking the start of their 2020 seasons. The two sports are among the four that have been cleared to play this fall as part of Season A. Boys’ Golf began practice and competition last week, and boys’ and girls’ Cross Country can begin practice on Wednesday. The boys’ Tennis and Softball seasons, which both begin competition on Thursday, will look a little different due to state guidelines around the COVID-19 pandemic. Softball will feature a 16-game regular season, and 12-player rosters per team, per level. There will be no regional tournament, as teams will qualify directly to a 16-team state tournament bracket. Softball's championships are scheduled for Oct. 10.

Not one of those sports, with the exception of boys’ golf, has ever been available for small schools in Colorado. The ruling leaves girls in small schools completely out of the equation with no activity provided for them. In response to this very unfortunate and short-sited move by CHSAA, some girls are trying to see if they can walk onto a bigger school softball team. However, because Volleyball is not in the equation the bigger schools like Lamar that does offer softball is already overloaded with not only their usual players but also new players from their own schools’ volleyball programs.

Last week, as well, the small school administrators asked for a zoom meeting with the heads of CHSAA wanting to address the following main issues this new schedule entails:

That zoom meeting, on August 6, was depicted as attended by 90 small schools, although the Independent has not found an administrator in southeastern Colorado who even knew it was happening, let alone attended the meeting. In addition, CHSAA Commissioner Rhonda Blanford-Green tweeted after the meeting, “Great Zoom today! A FB season change, never discussed therefore no push back from 90 Rural Sups. Therefore the 2020-21 calendar is set. Staff looks forward to conducting statewide FB in Season C for all classifications!” Governor Polis and the Colorado Department of Education was tagged on the tweet. 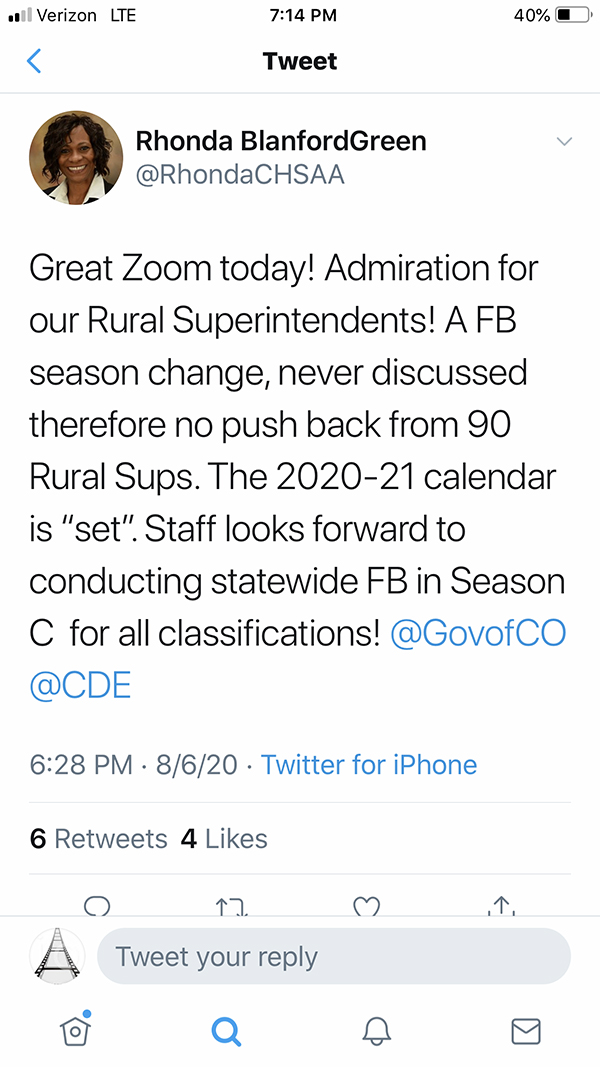 However, a number of sources who were in the meeting say Blanford-Green’s tweet is inaccurate. An administrator on the call said, “The discussion immediately went to 6-man football because there are no metro schools. Then it expanded to 8-man football and then eventually to 1A volleyball.”

Perhaps it is time for CHSAA to figure out who they are representing. Approximately $150,000 per year comes to CHSAA from the more than 140 small schools in Colorado. If that money were pulled from CHSAA’s coffers it may or may not hurt them financially. However, that amount of money would go a long way in establishing a small-school CHSAA organization that understands the unique needs of small-town, multi-sport athletes.

Despite all the problems associated with the new CHSAA schedule many will say that it’s lucky that the kids get to play at all. CHSAA themselves stated, “The state, officially Gov. Jared Polis, directed this decision. Their timeline is our timeline.” That means that the 140,000 Colorado high school athletes will just have to deal with CHSAA’s blanket plan as mandated by the Governor.

For some, that is enough. But for most, particularly those in the rural areas who have not been affected by COVID, that is just not good enough. Perhaps Paul Klee said it best in his August 8 article in the Gazette, “The next generation has been afforded a front row seat in the most impactful type of class --- real time experience. What to do about it? The second you turn 18, if you haven’t already, register to vote. Then vote.”