Written by Betsy Barnett on 19 August 2020. Posted in Sports 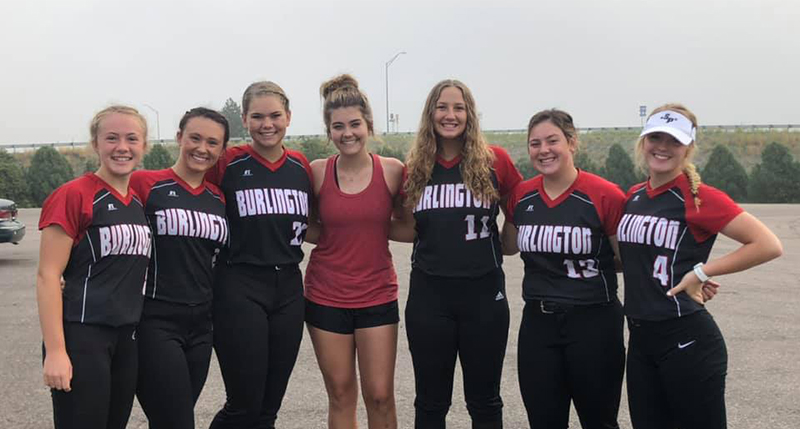 It’s a strange turn of events for girls’ sports in small school Colorado as last week CHSAA came up with zero options for girls in these schools to participate in a sport in Season A, formerly known as the Fall Season. However, there are a number of girls in the area that adjusted to the decision as it now stands, and opened themselves up to the possibility of playing a different sport than volleyball—the one they usually would play during this time of year. They are bringing back the summer days of softball and joining the bigger schools who happen to have a team.

The four girls join a brand-new Wiley team that was hastily put together when CHSAA pulled the plug on the usual volleyball season this fall. Wiley Superintendent Jeff Bollinger stepped up to the plate and decided to form the team with the hope that it would attract players from surrounding schools. In addition to the four players from Eads, there are 11 players from Wiley including seniors Avery Bollinger, Macy Rowan, Taira Weber; juniors Ellie Page and Demi Wollert; sophomores Fatima Gomez and Grace White; and freshmen Johanna Brown, Sariya Lujan, Bethany Summers and Boston Weber. McClave sent over three players including juniors Anna Beckett and Maggie Chase; and sophomore Kennedy Vallejos.

Bollinger, who has coached high school and college level softball in the past, says of his new endeavor, “Only two of our players have played high school ball, and many of our kids have not played for years, but they have been very impressive in practice. They all have a good work ethic and a desire to improve. I suspect that we will have some growing pains as a new program, but I also think we will have many successes as we build.”

The head coach for the Cougars is Michaela Koster with assistants Delaney Duncan and Tyson Weisshaar. Koster says, “I’m excited to get underway and really pleased to have the Kit Carson girls join us. We haven’t gotten to know each other all that well yet, but I already know they are all coachable and hard workers.”

On Saturday Burlington had their opening double header with a very tough Lutheran team from the Denver Metro League dropping both games by large margins of 13-1 and 12-0. Obviously, the batting was a problem for the Cougars as they only managed 2 hits in each game.

This week Burlington has a date with the newly formed Wiley team in Panther country on Tuesday and then will face off against Lamar on September 5 in Lamar.

All in, the Independent is excited to cover three softball programs connected to area student athletes who have made the best out of a very difficult situation putting their best cleat forward, in this instance, and trying to excel in a sport that may not be their number one choice. But it will have to do for this year, at least.

Cover: Seven girls from Kit Carson hung up their volleyball shoes and tied up their softball cleats as they will travel to play softball with Burlington during Season A action. They include (l to r) Torrie Randel, Tieler Randel, Payge Booker-Rady, Cally Booker-Rady, Stephanie Framel, Jordyn Weeks and Faith Johnson. Photo: Kit Carson High School