Written by Betsy Barnett on 27 August 2020. Posted in Sports 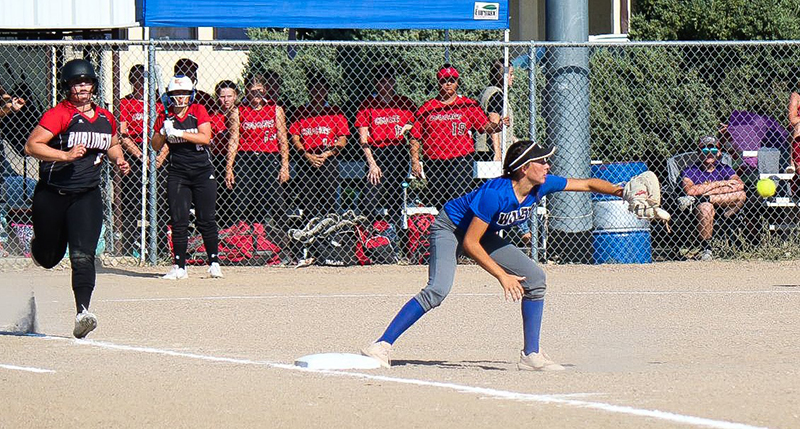 Sometimes you just have to look at the silver lining---even in 2020. Because CHSAA completely blew up the small school sports schedules, Jeff Bolinger, new superintendent at Wiley decided to use CHSAA’s short-sited move to make lemonade out of lemons. He started a high school softball team in Wiley, in a school that had never had one before. Why not? The area female athletes from the small schools didn’t have a sport to play, but as little girls many had played summer softball. Therefore, Bollinger hedged a bet that they might just come out for the team. And he was right as Wiley’s new softball team, playing in the 3A division, has players from three different schools in the area including Wiley, Eads and McClave.

Bolinger went a little further as he put his money where his mouth was, sort of speaking, and took up the reins as head coach of the newly formed team. He managed to work with some flexible Athletic Directors from other schools in the Tri-Peaks League and stitched together a playing schedule that, if not perfect, is pretty darn challenging for their first year out of the gates.

On August 18, 2020 the Wiley Panther’s Softball team made history by hosting their first home game, ever. Their opponent, appropriately enough, was the Burlington Cougars. The Cougars also had received some gifts from the results of CHSAA’s demolition of small school sports as seven good athletes from Kit Carson and 1 from Cheyenne Wells joined their team. Therefore, August 18th, represented a homecoming of sorts. Many of the players on the field in Wiley that day had played Babe Ruth Softball together when they were little girls.

Wiley would lose that first game, 15-7, to the Burlington Cougars.

There was plenty of action on the basepaths as Burlington collected 12 hits and Wiley had six.

Wiley got things moving in the first inning with one run after holding Burlington scoreless.

Burlington would pull away for good with six runs in the third inning. Randel tripled on a 2-0 count, scoring two runs, Stephanie Framel then singled scoring two more runs. Faith Johnson came to the plate and tripled on a 1-0 count scoring Framel. Finally, Jordyn Weeks grounded out, but scored one more run in the fielder’s choice.

Framel was the winning pitcher in the 15-7 victory. She allowed six hits and eight runs over a complete game of seven innings. The junior struck out four.

For Wiley it would be Bethany Summers, a fine and talented freshman, taking the mound for her first-ever high school game, as well as Wiley’s. Although taking the loss, Summers made the history books. She would allow 12 hits and 15 runs but would strike out 6 and put in an impressive complete game of seven innings.

Bolinger was very happy with the way his girls performed in the maiden voyage of Panther Softball. He stated, “Mostly, we had a solid defense with a couple of miscues that led to two big innings.”

For Wiley, junior Ellie Page had a good day at the plate with a single, a double, and sent one over the fence.

Cougar head coach Michaela Koster was happy with the win over Wiley after losing their opening against a tough Lutheran team. “. We did have a successful day in Wiley on Tuesday. The Varsity game started off a little slow, but in the 3rd inning Brenda Robles (Junior) was able to get a great triple, which from then on out was contagious for everyone on the team. The girls have really pulled together to make a run at it this season.”

The Cougars saw the ball well against Wiley, racking up 12 hits in the game. Randel, Johnson, Payge Booker-Rady, and Mayola Orrantia all managed multiple hits for Burlington. The Cougars also stole 6 bases with Orrantia grabbing two.

On Saturday, in nearly 100-degree weather, the Panthers hosted James Irwin in a varsity and a JV contest. The field literally was surrounded by tents and more than 200 fans who had come to support the Wiley team. Bolinger said, “People are just excited to get to watch sports again. They are very supportive of the softball team and are excited to see what we can accomplish.”

Wiley’s varsity defeated James Irwin, 12-0. The JV then took over and won their game decisively, 15-1.

Bolinger stated that the varsity game had started slowly and a bit sluggishly. But then in the third inning, McClave senior Maggie Chase stepped up to the plate and sent a monster grand slam over the outfield fence. “That had everyone on their feet,” said Bollinger.

The freshman, Bethany Summers, was in the circle again for Wiley and had yet another complete game throwing a one-hit shutout. The talented thrower also struck out five.

Page went 3-for-3 in the game with two doubles and a home run.

Wiley’s next contest will be with their close neighbors to the south, the Lamar Savages, on Friday. They will then travel to Fowler to meet 4A Alamosa in a double header on Saturday.

It seems Bollinger’s gamble is paying off as the Panthers are making history, "I was excited to see the first pitch in Wiley Softball history. The girls have been impressive so far with their work ethic and passion for improvement. We only have one player that has played at the varsity level, so we are going to be growing a lot this year and hope to put up a formidable team by the end of the season."

Cover: Rachel Kopasz from Eads makes a play at first base during action in Wiley’s season opener against the Burlington Lady Cougars on Tuesday, Aug. 18 in Wiley. In the first game for the new program, Wiley fell to Burlington, 15-7. Photo: Braden Black/John's Sports Page