Written by Betsy Barnett on 10 September 2020. Posted in Sports 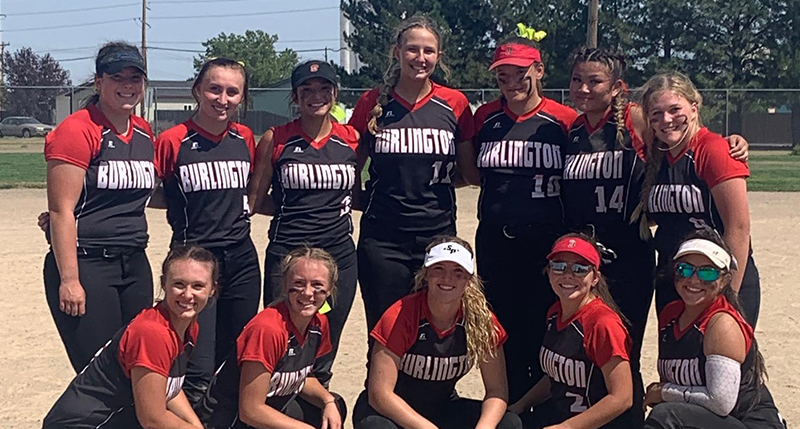 It was a big day for the Burlington Cougars’ softball program as they recognized 9 seniors after upsetting Lamar in a Tri-Peaks softball classic. The win gave Burlington a 2-2 overall record, while Lamar dropped to 3-2 after also losing to Rocky Ford on Tuesday and La Junta on Thursday.

Burlington put up three runs in the sixth inning to secure the win. Mayola Orrantia and Eve Richards moved runners across the plate with RBIs in that inning. At that point in the contest Lamar had challenged Burlington’s lead by scoring two runs making the score 4-2 before the dam burst open.

Senior Ya Mei Wilson got the win for Burlington as she had a complete game going seven innings, allowing three runs on six hits and striking out a phenomenal 15 batters.

Shania Sigala took the loss for Lamar. She, too, threw a complete game with six innings of work, allowing 10 hits and seven runs while striking out four.

The Cougars racked up ten hits on the day. Stephanie Framel and Faith Johnson from Kit Carson joined Orrantia and Maggie Moller with multiple hits. Framel went 3-for-3 at the plate and pulled one walk getting on base all four times. She would score twice, steal a base, and contributed 2 RBIs. Johnson was 2-for-3 on the day. Orrantia, a junior Cougar, was 2-for-2 plus a walk, scored twice, and would have 2 RBIs off of a triple.

Lamar tallied six hits in the game. Jenea Gallegos and Trinity Gonzales each collected multiple hits for Lamar. The aggressive Savages stole ten bases during the contest with three players stealing more than one base. Gallegos led the way with four stolen bases. Maggie Cook-Wilson had a strong game behind the plate keeping the Cougar runners honest.

Neither team scored until the third inning when Burlington strung together three runs. Freshman Torrie Randel started the run out by pulling a walk and then stole second. Wilson moved her to third on a fielder’s choice. Framel then came to the plate and hit the ball to the Sigala in the circle. She looked at Randel first but then chose to try to get Framel. Randel hustled in to score and Framel was safe on first. Framel then moved to second on a stolen base.

Orrantia was hit by the pitch putting two aboard. Richards then came up and hit a strong double to left field allowing both Framel an Orrantia to score. Johnson also got aboard but the Cougars failed to get her and Richards in.

The Cougars gained another run in the bottom of the fourth inning when the Kit Carson duo of Randel and Framel teamed up. The speedy Randel got aboard when she was hit by the pitch with one out. Wilson walked moving Randel to second. Framel then came up and singled past the shortstop while Randel circled third and streaked home.

Burlington will host a big game with Limon on Saturday, September 12. They will then have to wait for Wiley to come to town on September 19.

The senior presentation was a nice to tribute to these seniors who have been through so much adversity due to the ravages of the COVID-19 situation. They were saluted by many fans who showed up in support of their determination and for the team, in general.

Long time sports announcer Kerry Sherman, who did the play-by-play for the game said, “It was cool to see the chemistry that has developed within that program. Girls from four schools, playing for each other. Coach Koster is doing great things, and it will be fun to follow them the rest of the season.”