Written by John Contreras on 02 October 2020. Posted in Sports 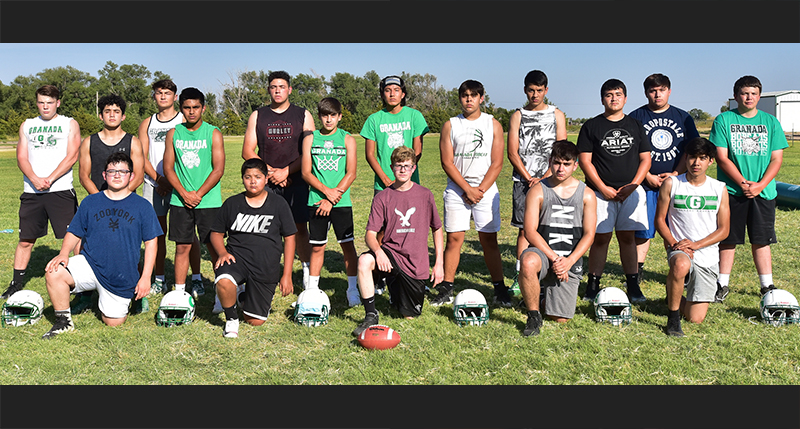 It will mark the changing of the guard for the Granada Bobcats football program. New coaches but familiar faces will take the wheel. Brothers Treagon and Tyndan Marquez will be the head coach and assistant coach respectively. The duo takes over the coaching reins from former head coach Junior Gonzales.

The brothers are Granada graduates and played sports for the Bobcats during their years in high school. Tyndan graduated in 2009 and Traegon in 2011. In fact, Tyndan was a sophomore quarterback when he guided the Bobcats to the Class A 8-man state football championship in a thrilling 47-46 victory in triple overtime against Stratton in 2006. Both Tyndan and Traegon were members of the baseball team that won a Class 1A state championship with a 1-0 victory over Caliche in 2009.

“I’m super excited with getting the position as the head coach,” said Traegon during the first day of practice on Sept. 24. “It’s always been a dream to be a coach for the Granada Bobcats. It is kind of cool to see it come full circle. I was on the football sideline as a manager for the team when I was younger. Now to be on the sideline as the head coach is pretty special.”

The Marquez brothers inherit a team that finished third in the South East 6-man League with a 3-2 record. The Bobcats lost in the first round of the state playoffs to North Park, 42-25 and finished the season with a 6-4 record.

Heading into their third year of 6-man football, the Bobcats will see a change in the league alignment. Eads, Cheyenne Wells, and Kit Carson were moved out of the South East League and will now join Stratton-Liberty and Hi-Plains in the East League. The South East League will now be comprised of Granada, Cheraw, and Walsh as well as new teams Branson/Kim, and Manzanola.

“We don’t get to play the staple teams that we’re used to seeing,” said Traegon. “But we’re just happy we get to play.”

The new coaches inherit a team that lost only two seniors last year. The Bobcats were also a young team a year ago. “We relied on a lot of young players,” said Treagon, who was an assistant coach last year. “A lot of them saw playing time so we bring back some experience.”

This year’s team will be comprised of 18 players and Treagon says, “A lot of them dedicated themselves to working out in the weight room during the off season.”

“We are bigger and stronger,” he said. “Our kids have put on some serious muscle.”

“Dominic is an athlete and returns as our starting quarterback,” said Traegon. “He understands our playbook and we trust having the ball in his hands.”

“John is going to play a big key on both offense and defense,” Traegon said. “We expect good things from him.”

Brandon Gonzales, a 5-10, 170 lb. sophomore, is expected to play a big role this year and will see duty at quarterback at times as well as playing one of the end positions.

Ivan Yanez a 5-8, 150 lb. junior will also return as a weapon on offense for the Bobcats. The receiver had 29 receptions for 465 yards and 4 TDs. “Ivan was our leading receiver last year and he’s incredibly fast,” cited Treagon.

On defense, Rink or Hainer will play nose guard. At defense ends will be Alan Ayala, freshman, and Bailey Hernandez, 5-10, 160 lb. sophomore.

Coleman will also play at safety when he is not at linebacker.

Other players expected to be in the mix will be Anthony Galan, sophomore; Luis Cano, sophomore, and Jonus Guevara, freshman.

“I really think it’s going to be a fun year for us,” said Traegon. “We put in a lot of work during the offseason and hoping to make some noise late into the season. Every single game is going to be important with only eight teams advancing to the state playoffs this season.”

Besides the teams in the league, Granada will also play non-league games against La Veta and Cripple Creek-Victor.