Written by Betsy Barnett on 09 October 2020. Posted in Sports 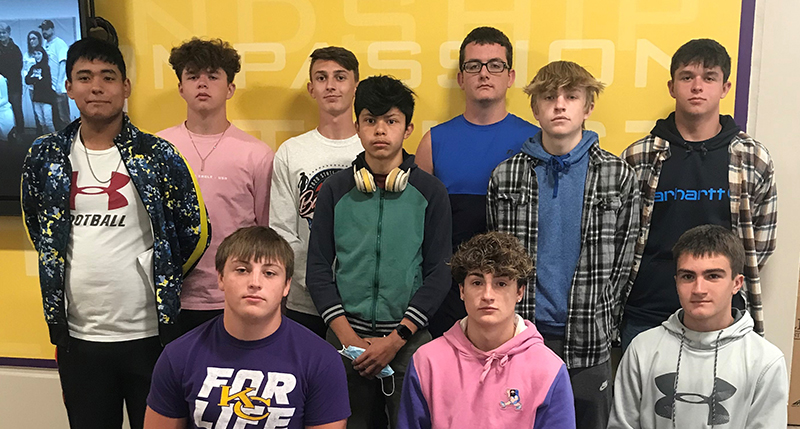 On the surface, football experts might count the 2020 edition of the Kit Carson Wildcats’ football team out of the playoff picture after losing 7 seniors, all who contributed in huge ways to the Wildcats’ semifinal appearance and an impressive 10-1 record a year ago.  But hold on just a minute as the Cats return their experienced coaching team of Curt Connelley, Andrew Maxcy and Jason Randel.  That means their system is in place and the young players about to step into the spotlight know what is expected of them.

Kit Carson has enjoyed a number of years of exceptional success riding on the shoulders of the class of 2020 that included an unusual 7 outstanding athletes who took with them on graduation day the team’s speed, size and experience.  Take for example Jayden McCombs-Farmer who led the team and was in the top 5 in the state in rushing yards and touchdowns.  JMF rushed for 1,083 yards and had 390 yards in reception.  The Wildcats also lost Cordell Farmer and Joe Bryan, two seniors who were also key to their success on the ground and in the air.  Their size, including Brock Weiand, Peter Hornung, Bradyn Bogenhagen and David Arnold will be very hard to replace.

Connelley knows he has a lot of work ahead of him but believes in the system and his young men.  “Returning starters includes our lone senior in Sullivan Farmer.  Juniors Danial Arnold and Brett Mayhan also had considerable amount of playing time last year.”

Sullivan Farmer is key to the Wildcats’ success this year.  As a junior he led the team at the quarterback position throwing for 791 yards playing an all-around role rushing, passing, receiving, and kicking. And, as every 6-man fan knows, to have an experienced kicker on the team is a big factor for success.

Arnold was one of Farmer’s favorite receivers a year ago.  He’s also a versatile athlete having good stats in the rushing department and as a defensive player.  Mayhan looked good in many games a year ago at the QB spot.  He’s an accurate passer and has grown a bunch over the past year.  Mayhan also played key roles in kick off returns and on defense during the 2019 campaign.

Conaway is also expecting good things from his sophomores, who a year ago got a lot of field time as the Wildcats blew out many of their opponents.  “The Mitchek twins, Alex and Paul will be key players this year.  We’ll also be using Tanner Conaway in multiple spots,” stated Connelley.

Alex Mitchek will more than likely be at the center holding down the offense at 180 lbs.  His twin brother, Paul, is a big running back who produced 390 yards last year as a freshman.  Tanner Conaway is a shifty, quick-footed runner and can also throw the ball when called upon.

The freshman class rounds out the 2020 Wildcat roster including Rowdy Koch, Keaton Marriott and Alan Salcido.

Kit Carson begins their 2020 campaign at home on their brand new field build during the pandemic.  They will make history at home on Friday night, October 9th as they host Miami-Yoder in the season and home opener.  The Buffalos only had a JV program a year ago so Connelley doesn’t know much about them.  They will then travel to Kiowa the next weekend for their second non-league contest.  But after those two games, things get interesting very quickly as they begin perhaps the toughest league play in 6-man football.

Connelley minced no words about the league saying, “CHS league alignment for us is an extremely tough schedule with every team making the playoffs last year with Hi-Plains, then Flagler/Hi-Plains, made crossovers against Eads who made the quarterfinals.  Cheyenne Wells made it to the semifinals, and Stratton-Liberty was the runner up.”