Kit Carson Begins a New Era with a Win Over Miami-Yoder, 56-18

Written by Betsy Barnett on 16 October 2020. Posted in Sports 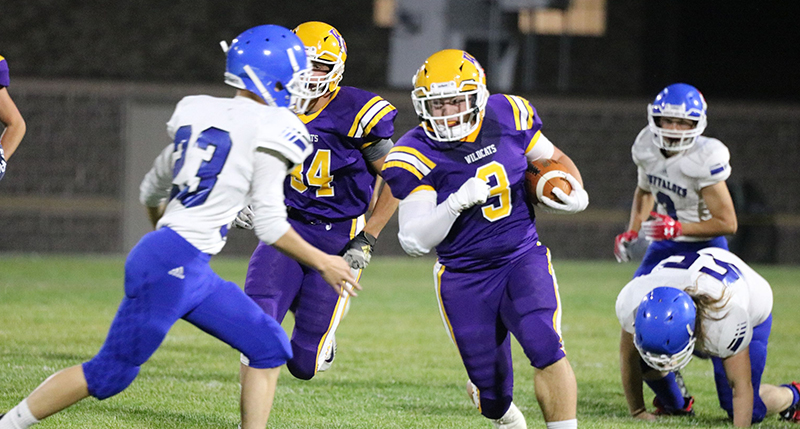 Under the exceptionally bright lights at the new football field in Kit Carson, the 2020 Wildcat team brought in a new era.  This would be not only the first game of the season; but, more importantly, the first game on the new field.  The turf was laid in August and the rest is now history as Curt Connelley and his Wildcats took the ball and ran with it to a 56-18 decisive win over Miami-Yoder.

Connelley was pleased with his young Wildcats stating, “I thought it was a good win for us on the new field and for the new school.  I am pretty proud of the boys and how they played.”  Connelley went on to say, “Defensively we were kind of going on the fly with Miami-Yoder coming down from 8-man and not knowing anything about them.  We, of course, had plenty of miscues which I knew was going to happen with such a young group and not having our usual 3 weeks to prepare.”

The Cat defense took care of business soon after the game began when Paul Mitchek forced a safety on a sack to the Miami-Yoder quarterback.

Junior Wildcat quarterback Brett Mayhan then went to work and found good success throughout the rest of the first quarter passing for three touchdowns.  The first strike went to Alex Mitchek when Mayhan connected with him with 6:16 on the clock.  The Sullivan Farmer 2-point conversion kick was good, and the Wildcats moved forward with a 10-0 lead.

Then, at the 4:11 mark Mayhan struck again, this time finding Farmer open down field.  The very fast senior backer ran it in for a 45-yard TD pass connection.  The Farmer kick failed, but the Wildcats were up 16-0.

Kit Carson put one more score up on the board with just :32 seconds remaining in the first quarter.  Again, it was Mayhan to Farmer in a 19-yard hook up.  No kick again, but after one period the Wildcats were in control, 22-0.

The Cats’ defense continued to put pressure on Miami-Yoder allowing them little offensive production.  But, offensively for the Wildcats, Farmer continued to be a problem as he broke away for a 42-yard touchdown at the 8:47 mark.  Farmer then added two more points to make it a 30-0 lead.

Mayhan struck again with just :48 seconds left in the first half when he connected with Paul Mitchek for a 31-yard TD pass play.  KC then tacked on a point on a pass play from Mayhan to Danial Arnold for a 37-0 lead.

The Buffaloes got on the scoreboard midway through the third period on a 14-yard run making the score 37-6.  But Paul Mitchek answered with just 1:19 left in the third on a strong 10-yard power run into the endzone.  The extra point attempt failed, but the Cats extended their lead to 43-6.

When the fourth quarter started the Buffaloes got some offense going once again scoring on a 4-yard punch leaving the score at 43-12.  Paul Mitchek, again, answered with a 42-yard touchdown run making the score with just 4:00 minutes remaining at 49-12.

Miami-Yoder scored one more time against the younger Wildcats on a short touchdown pass play leaving the score at 49-18.

And, true to form, Paul Mitchek had to have the last say as he ran the ball in at the 3:16 mark on a 49-yard touchdown.  Mayhan came in and hooked up with Rowdy Koch on the conversion play leaving the final score at 56-18.

Paul Mitchek tore up the new turf at the Kit Carson field rambling for an impressive 213 yards and 3 touchdowns on 16 carries.  Sullivan Farmer led in receiving with 63 yards and 2 touchdowns, while Mayhan threw for 139 yards and 4 touchdowns.

The defense was the key to the Wildcat win as they tallied an interception by Mayhan, a fumble recovery from Alex Mitchek, and 58 tackles.  Leading in the take down department was Paul Mitchek and Mayhan with each having 12.  Alex Mitchek pulled down 11 Buffaloes, while Arnold had 10 more tackles.

The Wildcats now travel to Kiowa for their second non-conference game before they begin conference play.  Again, they don’t know much about the Indians except that they lost to Eads in Week 1, 54-13.

Connelley stated, “Next week we have Kiowa, and it will be a little bit of the same not knowing much about them.  They had their first year of 6-man last year so this week coming up we need to work on what we need to clean up offensively and defensively to be ready for Kiowa.”