Written by Betsy Barnett on 16 October 2020. Posted in Sports 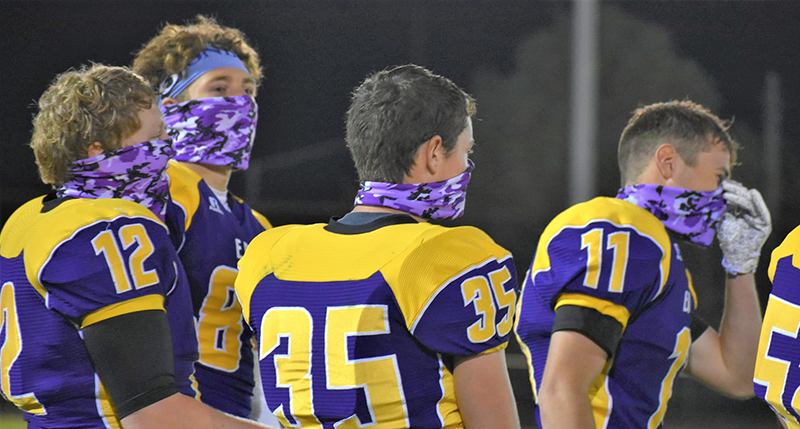 Small school football fans, parents, teachers and students are thrilled that football actually got underway on Friday across the state.  In Eads, a large crowd, hungry to finally get to cheer on their Eads Eagles, were on hand for the middle school game and then the high school game.  Both team won their games over Kiowa.

The Eads Eagles started the season with a 54-13 win riding the back of senior Damien Barnes and a strong defensive effort across the board.

According to fifth year head coach Trey Eder, “It is a good feeling to have our defense have a good game as that has been a weakness for us over the last few years.  We had some big hits and great plays.”

The Eagles looked pretty good in their first time out on the field except for a miscue on the very first play of the game.  Eads elected to kick off first and the ball went into the capable hands of Indian senior Dustin Wenz.  In what resulted in more than a couple of mistakes, Wenz found his way through the weak kick off coverage taking the ball 70 yards to the house with just a few seconds ticked off the clock.  Eads held off the extra point attempt but had dug a hole for themselves trailing, 6-0.

The first quarter went pretty quickly as both teams struggled against the defense of the other.  Finally, at the 1:30 mark of the first senior backer Damien Barnes decided it was time to get the ball rolling.  He took the handoff, headed to the left outside, but then switched direction and came back to the right against the grain scoring from 6 yards out.

On the kick-off, Spady got down the field quickly and wrapped up Wenz by one leg.  As Wenz tried to twist out of Spady’s hold, senior Hatch Nelson came in hard and hit him twisting his leg on the hit.  Wenz went out with the leg injury and never returned.  This was a big blow for the Indians as he was their biggest threat to the Eagles.

After that injury Eads put the pressure on Kiowa.  With :25 left in the first, Spady forced a safety with an impressive hustle to the ball.  Spady then took the kick-off and ran the ball back to the 3-yard line.  That set up a final first quarter touchdown by Barnes as the buzzer went off.  Spady kicked for two more conversion points, and after the first quarter Eads had the advantage 18-6, having scored all 18 points in one and a half minutes.

The Eagles then turned up the heat in the second period as both the defense and offense dominated the Indians.  While the Indians struggled to get their offense going, Eads pressured the ball every time.  In one such play, junior linebacker Donte Sierra put an impressive hit on the ball carrier.

The Eagles scored four times in the second period.  At the 8:15 mark Barnes electrified the crowd with a 47-yard TD run.  The Spady kick was blocked, but Eads extended their lead to 24-6.

On the next possession, Eagle quarterback Cade McDowell rolled out of the pocket and found Nelson on the sideline for a 33-yard touchdown hookup.  This time Spady used the cross bar to help him get the ball over for two more points, and Eads had a comfortable 32-6 lead.

Barnes then took over the show as he scored in runs of 28 yards and 27 yards on the next two possessions.  Spady got one more kick over and by halftime Eads led 46-6.

The mercy clock was initiated when Spady got loose on the first play of the second half taking the pigskin to the house in a 55-yard touchdown run.  He then kicked for two more points leaving the Eads tally at 54-6 early in the third.

Once the clock continued to run without stopping, Coach Trey Eder brought in his young guys getting a great amount of much-needed field experience.  The Eads defense held strong for the rest of the third and into the fourth, until a miscue on pass coverage allowed an 8-yard touchdown pass.  The conversion attempt was also good leaving the final score at 54-13 as the clock ran out.

Barnes led Eads with 170 yards on the ground scoring 6 touchdowns.  McDowell threw for 2 touchdowns including a 32-yard reception to Hatch Nelson and a 55-yard touchdown toss to Spady.   Spady also collected 35 yards rushing and 62-yard on punt returns.

Defensively, Spady led in the tackles department with a Safety and 6 tackles.  Barnes had 5 tackles, while Sierra and Nelson each added 3 tackles apiece.

The Eagles will now get on the road and travel to the home of last year’s state runner-up to take on Stratton/Liberty.  This begins the very tough East conference play.  The Knighted Eagles defeated Genoa-Hugo 64-19 in Week 1 of the preps season.

Eder is ready to meet this challenge, “We need to improve this week and learn from the film on how to correct our mistakes.  Stratton/Liberty is going to one of our toughest tests as they have a former Player of the Year on the team still.  We’ll watch film and go over our game plan and be ready for the test ahead.”

Cover: The Eads varsity players enjoy a reprieve after the mercy clock was struck soon after the start of the third quarter on Friday night. Photo: Wilson Photography