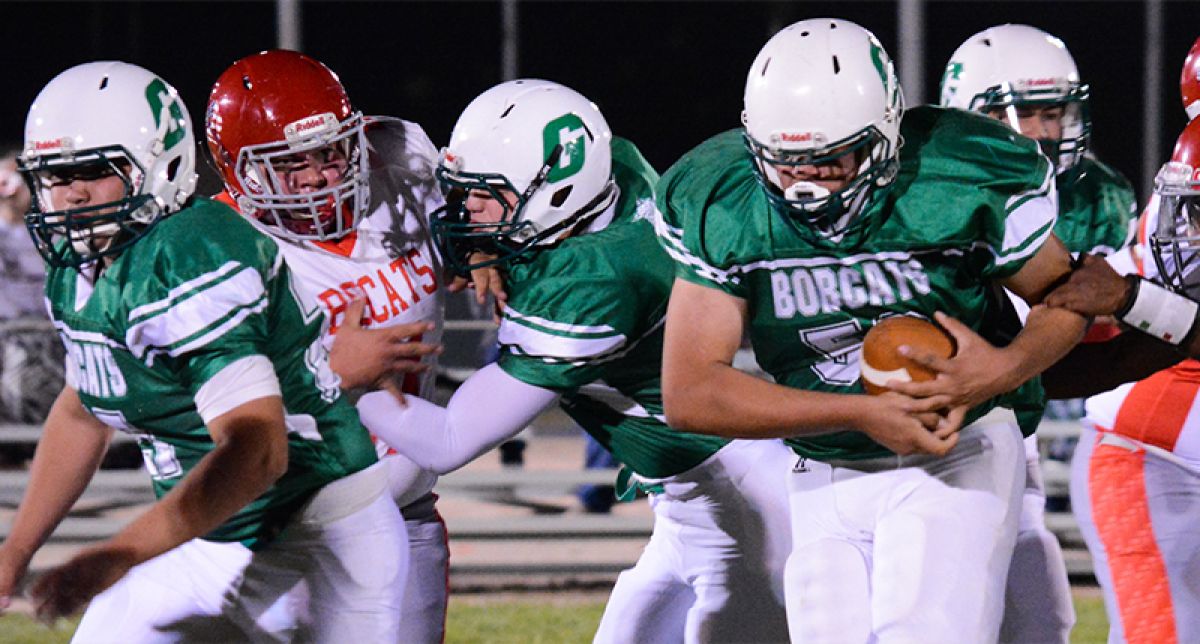 NO. 6 GRANADA STEAMROLLS TO 74-13 ROUT AGAINST MANZANOLA

The No. 6 state-ranked Granada Bobcats hosted the Manzanola Bobcats in a Southeast 6-man League opener for both teams on Friday, Oct. 16.

Granada had little trouble as they throttled the visiting Bobcats, 74-13, during homecoming festivities for the homestanding Bobcats.

First-year head coach Traegon Marquez said he’s been pretty pleased with how his team is playing after two games.

“Our kids are playing well right now,” said the new boss. “They have bought into our offense and that allows us to spread the ball to a lot of players in a lot of different ways.”

“Defensively, we’ve been able to stay disciplined and work as a unit to make stops,” Marquez added. “Of course, we lean on our veteran guys like Dominic (Coleman), Jon (Rink), John (Hainer), and Ivan (Yanez), but all of our young players have played key roles in our success. You’re never certain as to what you’ll be getting out of the younger players, especially freshmen, but they have stepped up in a big way. Myself and coach Tyndan (Marquez) are proud of them and where we are at.”

Against Manzanola, the Bobcats did most of their damage through the air with six touchdown strikes and finishing with 260 yards.

On the ground, Granada finished with 179 yards rushing and three rushing touchdowns.

Quarterback Dominic Coleman had a solid game as he completed 6-of-10 passes for 150 yards including three TD passes and no interceptions.

Brandon Gonzales also saw some action at quarterback. He completed 5-of-7 passes for 110 yards with three TD strikes and no interceptions.

John Hainer followed with three receptions for 77 yards; Coleman had two receptions for 45 yards; Lupe Martinez had two catches for 41 yards and two TDs; Jon Rink had one reception for a nine-yard TD; and Jonus Guevara had one catch for a 15-yard TD.

In the first quarter, Manzanola stayed close with Granada and trailed by only 16-13.  The Bobcats scored twice through the air in the opening quarter. Gonzales completed a 25-yard TD strike to Ivan Yanez. The kick was good on the extra point.

The second touchdown came on a 45-yard completion from Dominic Coleman to Yanez. The PAT kick was good.

In the second quarter, Granada dominated as the Bobcats exploded for five touchdowns (three passing and two rushing) and 36 points to build a 52-13 advantage at halftime.

The fourth touchdown of the quarter was scored through the air as Coleman and Hainer connected on 28-yard touchdown strike. The PAT kick was no good.

Granada capped the scoring in the first half on a 12-yard TD pass from Coleman to Martinez. The kick failed on extra point as the score stood 52-13 at halftime.

In the third quarter, Granada would score twice to extend its lead to 68-13.  Gonzales hooked up with Lupe Martinez for a 25-yard TD strike. The PAT kick was good.  Alan Ayala got into the scoring act on a 20-yard run. The kick was good on the extra point for a 68-13 lead.

In the fourth quarter Granada capped the game’s scoring on a 15-yard TD pass from Gonzales to Guevara. The kick was no good.

On defense, Martinez led the way with 9 tackles (five solo). Yanez followed with 6 tackles and Coleman, Hainer, O’Ryan Hainer, and Bailey Hernandez all had 5 tackles apiece.

Coleman and Guevara both had one interception each.

In other games in the Southeast League, Walsh defeated No. 10 state-ranked Branson/Kim, 16-12, and Cheraw blasted Cotopaxi, 46-0.

IN THE ARKANSAS VALLEY 8-MAN LEAGUE, the Holly Wildcats were slated to play at Springfield last Friday, but the game was postponed at the last minute just as the players were boarding the bus.

A report of a possible case of COVID-19 to a Holly High School student set off the turn of events.

Springfield, meanwhile, picked up a game with Gilpin County and lost 44-20 on Saturday.

Crowley County hosted the McClave Cardinals on Friday and chalked up a 59-12 victory.

The No. 2 state-ranked Fowler Grizzlies rolled to a 48-6 victory over Wiley.

If Holly (1-0) can play this week, they face an important home conference game against Crowley County (2-0) at 2 o’clock on Saturday, Oct. 24.

The winner of this game emerges as the main challenger to Fowler in the conference race.

Cover: Granada fullback John Hainer looks for running room behind his blockers during Southeast 6-man League action against Manzanola on Friday, Oct. 16 in Granada. The No. 6 state-ranked Bobcats steamrolled to a 74-13 victory. Photo: Marissa Valenzuela