Written by Betsy Barnett on 20 October 2020. Posted in Sports 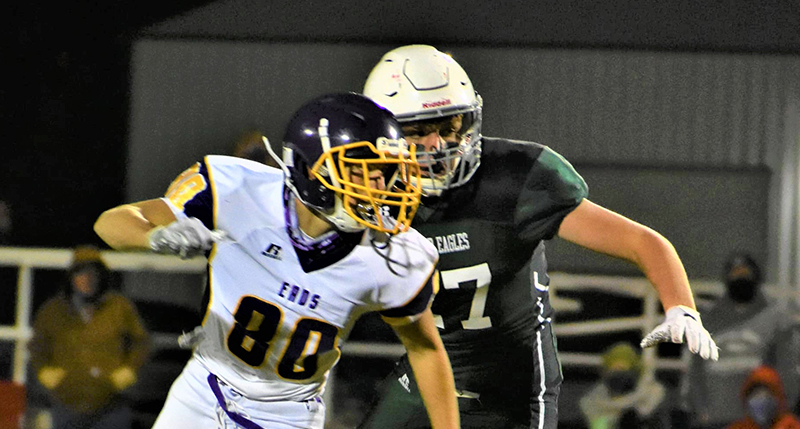 With the early first quarter score 16-0 Stratton/Liberty was rolling along nicely against Eads when their star senior running back Jaret Lichty went down with what initially appeared to be a dislocated elbow but ended up being a broken arm.  The Knighted Eagles’ coach Toby Kechter said they then challenged the younger players to “play hard for Jaret.”  Kechter said, “There is no one in practice that plays as hard and expects the same from his teammates as Jaret, and the young guys know that.”

This was a game of unbeatens as well as an important conference match up.  Stratton/Liberty held on to extend their record to 2-0 in a 66-27 win.  Eads dropped to 1-1 overall record and 0-1 in the tough East Conference.

Eads head coach Trey Eder said, “We definitely had a rough start.  We got behind in the first quarter 24-0.  We had numerous turnovers and we didn’t follow our game plan.  When you get down 24-0 to arguably the best team in the state it’s hard to dig yourself out of that kind of hole.”

Stratton scored right away on a 48-yard touchdown run.  Then at the 3:19 mark, they scored on a rare pass play from 1 yard out.  Finally, with just 1:34 left, the Knighted Eagles punched it in from a yard out.

These scores were set up by key mistakes on the part of Eads.

Finally, in the second period, Eads showed some life as Damien Barnes rushed for a 13-yard touchdown play.  The conversion play was successful with Porter Spady finding A.J. Vasquez in the end zone.  That made the score 24-7.

Unfortunately, the Stratton/Liberty group rattled off two more touchdowns including a 40-yard TD run with 2:24 left.  Then with no time on the clock, the Stratton kicker hit a very impressive 51-yard field goal for four more points.

Kechter said of Eads, “They cut the score to within 19 points in the second half.  Barnes and Eads are big and it took our kids to decide to get physical to finally push back their attack.”

Barnes, indeed, attack in the third quarter scoring twice midway through the quarter.  With 5:47 left he had an electrifying 75-yard TD run.  Spady’s kick was blocked leaving the score at 36-13.

Eads then held Stratton on defense and got the ball back with 4:22 left in the third.  Barnes then found Hatch Nelson in a 17-yard touchdown strike.  The conversion pass play was no good, leaving the score at 36-19 with Eads knocking on the door.

Eder was happy with the way his Eads boys responded to come back into the game, “The positive is the kids didn’t give up and played hard and for the rest of the game we played right with Stratton.  We had a one or two score game if you take that first quarter out of it.  We’re there if we don’t make too many mistakes and turn the ball over.  They can compete with the best teams in the state.”

Stratton answered Eads at the end of the third quarter with a 1-yard punch leaving the score at 44-19.

Starting the final quarter Barnes scored again from 1 yard out.  Spady’s kick was good leaving the score at 44-27 at the 9:20 mark.

But, then Stratton/Liberty picked it up and finished the game giving Eads no more opportunities.  They scored three more times in runs of 8, 55 and 20 yards out.

Stratton won in the rushing department as they churned up the field for 431 yards compared to 233 for Eads.  The total yardage, however, was within 50 yards of each other as Eads dominated from the air attack.

After Lichty was forced to leave the field with the score 16-0, sophomore Alex Cruz became a tough customer for Eads to contain.  He would rush for 269 yards in 18 carries and score 4 touchdowns.  Junior Charlie Clapper carried for 138 yards and 2 touchdowns.  Tyler Hase scored a touchdown on a 14-yard reception.

The defense for the Knighted Eagles was led by Hase with 12 tackles.  Logan Breyer and Riggin Williams each had 11 take downs.  Williams also recovered a fumble.  Cruz intercepted one pass.

Eder identified two areas of concern they will be working on this week, “Really it was just turnovers.  We’d get to moving the ball pretty well and then turn the ball over and they’d score again.  Also, defensively we have some work to do.  When you allow that many points you have to look to see what your defense is doing.   We’ll make adjustments and changes this week.

Eder went on to say, “I still have great confidence in our team.  The players were down on themselves.  They don’t like to lose and that was good to see them upset.  They didn’t play their best game at the end.  We have to learn and correct our mistakes.  We have to bounce back and play good football the rest of the season. “

This week is a home game as Eads will welcome Hi-Plains to Eagle Country.  Eads barely slipped by Flagler/Hi-Plains a year ago in the first round of the state playoffs.  They lost big to Cheyenne Wells 66-38 last week and are 1-1 on the season.