Eads Catches Fire in Second Half to Dominate Idalia on the Road, 73-23

It took the Eagles a little bit of time to warm up to the cold northern wind in Idalia, but once they got their running game squared around, they were off to the races.  Eads, in what would have been their Homecoming game this weekend, instead traveled to Idalia to upset their Homecoming in a lopsided, 73-23 win.  Eads is now 2-1 on the early season and were glad to get back in the win column.

Eads head coach Trey Eder was overall pleased with the weekend saying, “It was a good win for us.  Especially coming off a loss the week before and it helped us get back on track.  It was a tough week of preparation as we were game planning on Hi-Plains, and then, all of a sudden, we had to switch gears.  First off, we had to try to find a team who would play us after Hi-Plains ended up with a COVID case.  Once we found Idalia then we had to switch to game planning for them.  Through it all the kids did a great job staying focused for the week amidst all the chaos and came out with a much-needed win.”

The Eagles started out slowly in the cold night. On the first possession of the game Eads fumbled the ball.  Idalia’s Eduardo Estrada picked up the ball and ran it 19 yards to the endzone.  The conversion kick was no good, but the Wolves pounced on the Eagles, 6-0.

They would then add insult to injury on Eads’ next possession at the 5:54 mark of the first when a miscue caused another fumble that was recovered by Idalia in the Eads endzone.  All of sudden it was 8-0 and Eder was wondering if his kids were going to get focused, or not, “Fortunately, we were able to turn it around rather quickly and get the score back and then take the lead.  It was kind of a tough first half for sure that kept us working very hard to score and work the ball down the field.”

Eads would get back on their feet with just 2:30 left in the first when Bo Arnold completed a pass to Damien Barnes in a 55-yard touchdown play.  The Porter Spady conversion kick was no good as Eads tried to tie the game.  However, the Eagles were back within striking distance, 8-6.

And, as Eder stated, Idalia didn’t break down easily as the Eagles had to battle for every advantage they got.  Eads would score with 3:09 left when Barnes punched it in from a yard out.  This time the Spady kick was good and Eads grabbed the lead for the first time in the game, 14-8. 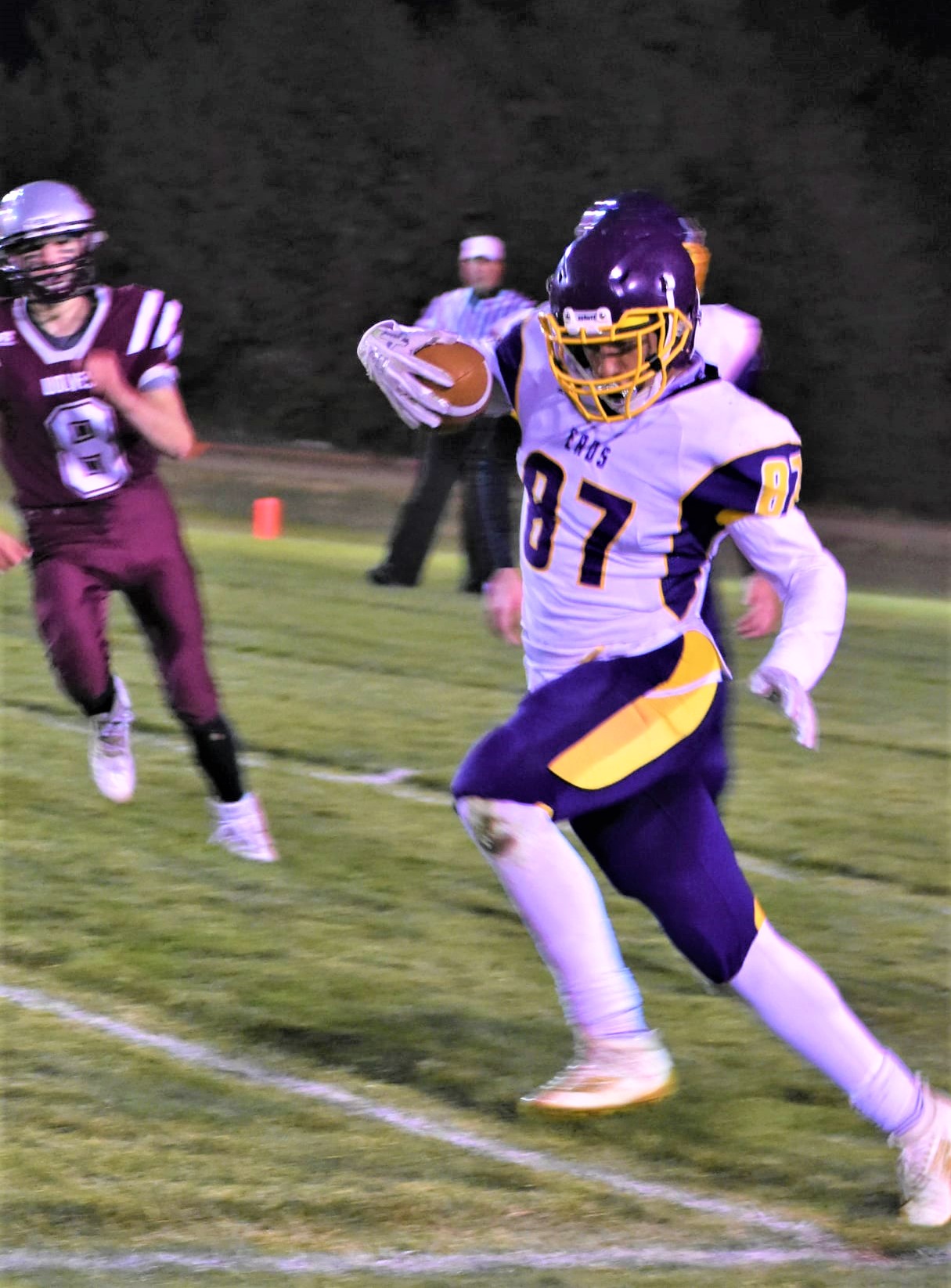 Damien Barnes tiptoes his way down the sideline during one of his five touchdown runs against Idalia on Friday night, October 23. Eads won 73-23 over the Wolves. Photo: Wilson Photography

Soon after Barnes was at it again as Eads moved the ball down the field and gave the final push to the big senior backer from a yard out.  Again, the Spady kick was good and Eads went into the lockers with a 22-8 lead.

The Eagles broke the game wide open in the third period as they scored three more touchdowns.  However, Idalia did sneak in one touchdown midway through the quarter.  At the beginning of the second half at the 8:10 mark of the third, Barnes broke away for a 47-yard TD run.  Spady’s kick was again good for 2 more points leaving Eads in control, 30-8.

On their next possession it was Cade McDowell going to the air to find success when he hit Hatch Nelson on a 6-yard TD connection.  Again, the Spady kick was through the uprights and the Eagles extended their lead by 30 points, 38-8.

The Eagle defense let down their guard midway through the third when the Wolves scored on a 17-yard pass play.  The two-point conversion kick was good leaving the score at 38-16

But Eads answered right away when the Eagle freshman running back, Porter Spady broke away for a 45-yard touchdown run.  He then passed over the top of the Wolves defense to Taite Weeks-Johnson for the extra point conversion play leaving the score at 45-16.

The Eagles scored again to start the fourth quarter on a Barnes 20-yard touchdown run.  The Spady kick was blocked leaving the score at 51-16.

Idalia again found success in the air against Eads’ secondary as they scored at the 6:20 mark of the final period from 34 yards out.  Their pass conversion play was also successful.  But that would be all the scoring the Wolves would muster as Eads battened down the hatches and allowed no more.

The Eagles then scored three more touchdowns before the quarter was over.  The first one was on the next possession at the 6:11 mark when Barnes, for the fifth time in the game broke away and scored on a 35-yard TD run.  The Spady kick was good leaving the scoreboard at 59-23.

The freshman Spady then got into the action in the final two touchdowns as he scored in long runs of 66 and 50 yards late in the game.  Another successful conversion kick left the final score at 73-23.

Eads had a phenomenal offensive game as a team churning up 612 total yards including 171 from the air and an impressive 441 on the ground.  In comparison, the Wolves had 168, most from the air with only 50 yards rushing.

Barnes led Eads in passing with 80 yards in the air with 3 completions in 3 attempts.  Bo Arnold had 62 yards passing and was 4-for-4.

Defensively for Eads it was junior Ty Wilson who led the way with 9 tackles.  Barnes, Spady, Nelson and Donte Sierra all had multiple take downs.

Eder liked what he saw on defense, “It was a great game for us defensively, as well.  We had some huge 4th down stops in the game that allowed us to keep rolling and eventually pull away for a big victory.”

The Eagles now hope to travel to the new Kit Carson field on Friday night, October 30 for an East Conference match up with the always tough Kit Carson (2-1) team.  The Wildcats are coming off a tough loss to Cheyenne Wells in the Cheyenne County rivalry game, 74-18.

Of the upcoming game, Eder stated, “This coming week will be a tough one for sure as Kit Carson is a good team and they will be looking to get back into the win column.  They will bring lots of energy and be ready for us and we must have a great week of preparation and focus.  It’s going to be a big game with playoffs on the line, RPI, and seeding implications.”