Wheels Fall Off for the Eagles with Injuries and Quarantines

Written by Betsy Barnett on 12 November 2020. Posted in Sports 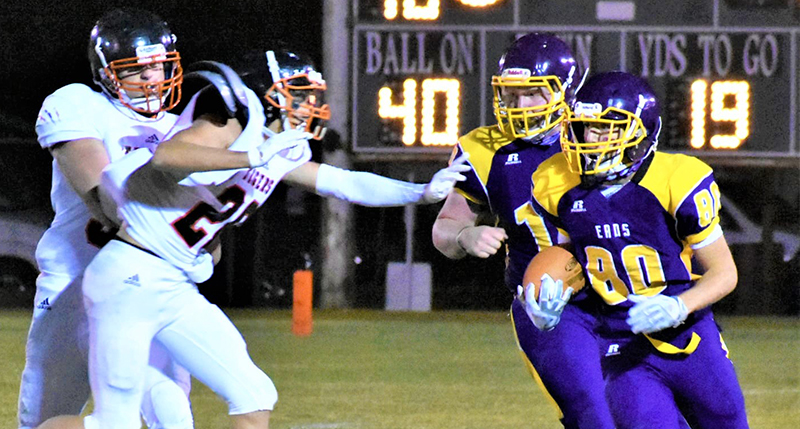 In such times of uncertainty, the Eads Eagles had considered themselves lucky to have maintained their health throughout this 2020 shortened football season.  The players had not been injured and they had dodged the virus throughout the late summer and into the fall.  However, on Friday night misfortune struck as first the Eagles’ senior running back, Damien Barnes, was sidelined almost immediately in the Cheyenne Wells game with a pulled hamstring.  And, then worse of all, the team is now quarantined until the Friday before the playoffs.  All they can do is hope Barnes heals in the two-week quarantine and that they can qualify for the playoffs.

Their game with Deer Trail this Saturday has been cancelled.

As of Monday, Eads was listed in the top 8 which currently puts them in the playoffs, but there’s one week to go and so that is not a guarantee.  Their Friday night loss to Cheyenne Wells, 42-18, definitely put them into some jeopardy.

On Friday night, after losing Barnes on their second possession of the game, the Eagles had to scramble to adjust to the loss.  That meant putting people in spots they weren’t used to playing.

Coach Trey Eder stated, “Offensively, it was tough for us when Damien went out on the second possession of the game with the hamstring.  It had us trying to figure out personnel and where we had to move.  We ended up having to change things on the fly.  A lot didn’t work until the end of the game.”

Eder went on to say, however, that the loss of Barnes may have been what the rest of the team needed in order to grow.  “It was very promising for the team on that aspect without Damien.  When you have a player like Barnes go down, it’s tough.  He does all the scoring and carries much of the load.  So, for the team it was impressive to see the other players be put in a position where it was on them.  They didn’t fold, and they didn’t give up.  They stepped up and rallied and played pretty well for us.”

Eder also mentioned that the team on the field may have played one of the best defensive games he’s seen from them in the past three years.  They held the high-octane Tigers to zero points in the first quarter while at the same time trying to adjust on the fly.

But, by the second quarter the Tigers’ offense came on strong as they scored three times against the Eagles.  Right away it would be Evan Worley who carried for a 28-yard touchdown run and the kick by Jesse Harlow was good leaving the score at 8-0.

With 5:31 left in the second the Tigers pounced again this time from the air when Preston Hernandez found Ty Scheler in a 14-yard TD connection leaving the score at 14-0 after Eads blocked the Harlow kick.

The Tigers’ final touchdown of the second quarter occurred at the 1:50 mark as Hernandez found Rogelio Rangel in a 26-yard touchdown strike.  They added one more point on the same play leaving the score at 21-0.

However, Eads was sparked by junior Ty Wilson just before the intermission when he hustled on defense causing a Safety and getting Eads on the board 21-2 at halftime.

Eads came back strong in the third and it looked like it was going to be a game when Porter Spady caught a pass and scored.  But a holding call canceled the touchdown and Eads couldn’t convert.  With 6:50 left the Tigers scored again on a Hernandez to Dillon Ball connection from 8 yards out leaving the score at 29-2.

But then Wilson, as he had at the end of the first half, sparked Eads when he grabbed the kick-off and ran the ball hard right up the gut of the Tiger coverage for a 77-yard touchdown.  Spady kicked for two more points leaving the score at 29-10.

Eads just simply ran out of gas by the fourth period as the Tigers scored two more times.  Rangel ran one in from 10 yards out, and Hernandez found Ball again for a 17-yard TD connection leaving the score at 42-10.

Late in the game Cade McDowell connected for Hatch Nelson in a 5-yard TD play. The Spady kick was good leaving the score at 42-18.

Without Barnes the Eagles could not generate enough offense to keep up with the Tigers who put in 353 yards of total offense.

Eads only had 94 rushing yards with Spady getting 68 of those.  They would have 133 yards from the air coming from McDowell who was 3-for-8 for 23 yards and had one touchdown, and  Spady who was 2-for-4 for 14 yards.  Freshman Bo Arnold got the nod at the quarterback position and was 2-for-6 on the day.

The Eagles’ favorite receiver was Nelson who had 3 receptions for 27 yards and a touchdown.

Obviously, no one knows now what will happen to the Eagles.  They are hoping this was not their last game of the 2020 season that has been so promising until Lady Luck turned away.  But whatever occurs, one thing is for certain, this is a really good team that deserves to be in the playoffs.

All Eder can do now is to watch film, determine his alternatives and see what happens in the next few weeks.

Cover: Freshman backer Porter Spady (#80) had the weight of the world on his shoulders when Eads lost their leading offensive player, Damien Barnes, to injury. Spady made a nice run here thanks to the strong blocking of Ty Wilson (#11) and Zack Fowler (#44). Photo: Wilson Photography