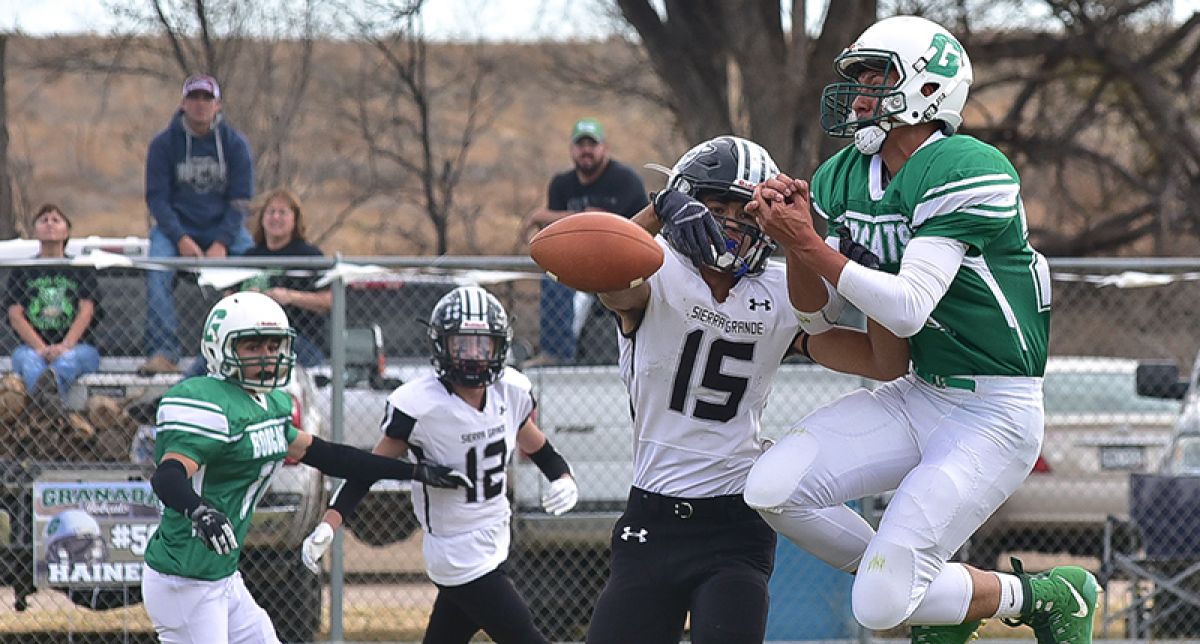 After having their Southeast League game with Walsh cancelled, the No. 4 state-ranked Granada Bobcats were able to pick up a non-league game with Sierra Grande that was played on Nov. 7 at Manuel Gonzales Field in Granada.

The league game with Walsh was cancelled due to Covid-19 issues in Walsh.

Sierra Grande headed into the game with Granada sporting a record of 2-0 and 3-1 overall mark to sit in second place in the Southwest League standings.

Mountain Valley (1-0 and 3-0) is in first place in that league race and will travel to play Sierra Grande in the final game of the regular season on Saturday, Nov. 14.

Saturday’s game in Granada was played with strong winds out of the south but that didn’t seem to hamper both teams.

Granada demonstrated a balanced offensive attack in an 81-33 blowout over the Panthers. The 81 points was the most scored by the Bobcats this season.

In fact, Granada quarterback Dominic Coleman had a field day.

The junior signal caller completed 9-of-15 passes for 133 yards and fired five touchdown passes all in the first half to spark the passing attack.

Coleman also rushed for 120 yards on 10 carries and scored two rushing touchdowns in the third quarter against the Panthers.

John Hainer racked up 123 yards on 17 carries and scored one rushing TD.

The 255-pound sophomore fullback also caught two passes for 24 yards and one TD.

“Once again we're happy we are able to play with everything going on in the world today,” said Bobcats head man Traegon Marquez. “I was proud of our kids. It took the whole team to get the win today.”

Marquez added, “With 25 MPH winds it switches up the game plan a little, but our kids responded well. We made key stops on defense and we were able to find the end zone with a lot of different players. Hopefully, we can stay healthy and stay playing because I think we have a really good shot at a playoff run.”

Granada scored on all six of their offensive possessions in the first half and  built a 44-13 lead at the intermission.

The Bobcats jumped out to a 24-6 lead after the first quarter.

With 7:29 showing in the opening quarter, Coleman connected with Lupe Martinez for an 18-yard TD strike. The extra point kick was good by Ivan Yanez to make it 8-0.

Following a punt by the Panthers, Granada struck in two plays on a 41-yard pass to Yanez with 5:30 on the clock. The PAT kick was good for a 16-0 lead.

After another punt by Sierra Grande, the Bobcats scored quickly in two plays.

On the next play, Coleman hit Brandon Gonzales for the touchdown with 4:12 left in the first quarter. The PAT kick was good by Yanez as Granada’s lead was extended to 24-0.

Following the ensuing kickoff, Granada engineered a five-play, 46-yard scoring drive that was capped on a 16-yard TD aerial from Coleman to Gonzales with 9:52 showing in the second quarter.

Granada countered with an 18-yard TD hook up from Coleman to Hainer with 6:26 on the clock. The kick was no good as the score stood 36-13.

Sierra Grande threatened when they had the ball on the Granada 14.

On third down, the Granada defense came up with a big play when Bailey Hernandez and Luis Cano combined to sack Sierra Grande quarterback A.J. Ojeda for a big loss to the 30-yard line.

On fourth down, a pass fell incomplete to close the door.

Granada took over on the 30 with 3:58 to go and put together another scoring drive.

During the drive, the Bobcats faced 4th-and-8 from the Sierra Grande 23-yard line and called time out with 51 seconds on the clock.

After the time out, Coleman busted a run for a first down to the Panthers’ 9-yard line.

Three players later, Hainer plowed up the middle for a 3-yard TD run. The kick was good by Yanez to bring the score to 44-13 at halftime.

In the third quarter, each team scored three times. At the end of the quarter, the score stood 66-33 in favor of the Bobcats.

All three scores for Granada came on the ground. Lupe Martinez scored on a five-yard run and Coleman scored on back-to-back TDs runs of 12 and 41-yards.

The Bobcats added two more scores in the fourth quarter.

Gonzales hit Jonus Guevara on a 7-yard pass with 3:21 left in the game.

The second TD came on a 13-yard pass from Gonzales to Alan Ayala.

Cano had 2 sacks and Hernandez and Martinez had 1 each. Guevara had 1 interception.

Granada (5-0) closes out the regular season with a non-league home game against Cripple Creek-Victor on Friday, Nov. 13 at 2 p.m.

Cover: Granada's Lupe Martinez breaks up a pass intended for Matthew Martinez of Sierra Grande during 6-man action on Saturday, Nov. 7 at Manuel Gonzales Field in Granada. The No. 4 state-ranked Bobcats rolled to a 81-33 victory to extend their record to 5-0. Photo: John Contreras