Written by John Contreras on 02 December 2020. Posted in Sports 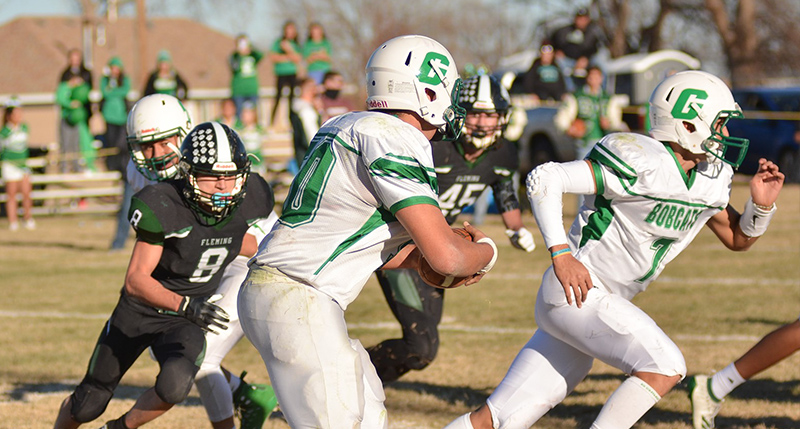 The season ended on a heartbreaking note for the young Granada Bobcats football team.

In a rematch with the defending state champion and No. 1 seed Fleming Wildcats, the No. 4 seed Bobcats fell short in a 6-man state semifinal showdown on Saturday, Nov. 28 in Fleming.

The two teams had faced each other just two weeks ago in a regular season finale.

In that game, Granada had Fleming on the ropes when the Bobcats held the lead before it slipped away in the waning minutes for a 49-44 victory for the Wildcats.

The rematch was much like the first game as Fleming scored a late touchdown to win the game, 52-46, in a see-saw battle.

The two teams battled through one tie and five lead exchanges.

“It was a tough way to see it end but I'm really proud of our boys,” said Granada first-year head coach Traegon Marquez whose team finished 2020 with a 6-2 record. “We had a great season and really made strides with all the young talent on our team. I was even learning on the go as a first-year head coach.”

“This one just feels like it slipped through our fingers and for the second time in two weeks and Fleming got the best of us,” added Marquez. “It's going to hurt for a bit.  The good thing is that it really gave our guys great experience and gives us a lot of purpose and urgency to put in the work in the offseason.”

Fleming did most of its damage with big plays on offense while Granada grinded out its scoring drives.

Granada held a 32-20 lead at the end of the third and then the fireworks began.

Fleming held a 38-32 lead early in the fourth quarter and then had to hang on for their lives.

Granada regained the lead on an 18-yard strike from quarterback Dominic Coleman to Ivan Yanez. John Hainer ran in the extra point for a one-point lead, 39-38.

The Bobcats then got a big break when they recovered the ball on a squib kick.

Granada kept the ball on the ground and with 3:05 left in the game Hainer barreled in for a one-yard TD. Another run by Hainer for the one-point conversion gave the Bobcats a 46-38 lead.

Fleming answered on the first play from scrimmage to score when Chris Hobbs streaked into the end zone to pull his team to within two points of the lead, 46-44.

Hobbs ended the game with 148 yards on just four carries and three TDs.

Disaster then struck for the Bobcats.

Looking to run out the clock for a possible upset, Hainer was hit hard at the Bobcats’ 15-yard line and the ball was knocked loose and recovered by Fleming.

Three plays later quarterback Kade Comstock connected with Brady Kuntz for the touchdown. Kenny Bandy tacked on a two-point kick and the Wildcats retook the lead 52-46.

Things got tense from there.

Granada fumbled again, but Hainer recovered. On the play, Fleming got flagged for a late hit that moved the Bobcats to the Fleming 33-yard line.

On Coleman’s third pass attempt Chris Goss came up with the pick. But the officials negated the interception after a personal foul against Fleming.

Granada had the ball back on the Fleming’ 18 with two seconds left on the clock.

With one more shot for a miracle, Coleman again looked downfield for a receiver but found no one open. He tucked the ball and headed for the goal line where the Wildcats ran him to the ground just yards short as the clock expired.

It was another tough loss for Granada who was the only team to score more than 40 points against Fleming twice. Previously, the most points scored against the Wildcats was 19 in a 68-19 win against Peetz on Nov. 29.

During the course of the game, Fleming held a 14-6 lead at the end of the first quarter.

After receiving the opening kickoff, Granada scored on its first possession.

Hainer’s number was called five times as he worked his way near the Fleming goal line.

Coleman capped the drive on a four-yard run with 6:58 showing. The kick by Jonus Guevara was wide and Granada was up 6-0.

Fleming struck quickly on first down when Comstock hit Kuntz for a 55-yard TD strike. The PAT kick was successful to give the Wildcats an 8-6 lead.

Granada mounted another drive to the Fleming’s 33-yard line before a Coleman pass was picked off by Joel Muller.

In the second quarter, Granada outscored Fleming, 14-8, and trailed by just two points, 22-20, at the half.

Following a squib kick, Granada took over at midfield. The Bobcats moved the ball to the Fleming’ 20 and Coleman later scored on a busted pass play. The touchdown was called back on an illegal block.

Two plays later, the talented junior signal caller hit paydirt on a nine-yard screen pass from Brandon Gonzales. The kick was good by Guevara and the score was knotted at 14-all.

After an onside kick, Fleming took possession on its own 38.

The Wildcats scored on the first play when Nolan Japp found running room up the middle for the score. The PAT kick was good, and the Wildcats regained the lead 22-14.

After the ensuing kickoff, Granada turned the ball over one play later when Comstock picked off a Coleman pass.

Fleming went three-and-out to give the ball back to Granada.

Granada ran off almost five minutes of clock before the Bobcats capped a 44-yard drive on a Coleman three-yard pass to Gonzales.

Fleming opened the second half with another big offensive play when Hobbs scored from his own 35. The PAT kick was good as the Wildcats extended their lead to 30-20.

Granada countered when Coleman hit Ivan Yanez to the Fleming 7-yard line. Two carries later Hainer hit paydirt on a three-yard run and the Bobcats pulled to within four points, 30-26.

The Wildcats ended up punting the ball away on their next possession.

Granada went back to Hainer on the next series and he tallied on a two-yard run. A kick on the PAT failed but Granada was ahead 32-30 lead.

The Wildcats tallied early in the fourth quarter on a 46-yard run by Chris Goss and Bandy was good again on the extra point for a 38-32 lead.

From there the two teams battled to the bitter end with Fleming escaping with another nail biter against the Bobcats.

Coleman finished the game with 248 yards on 18-of-25 attempts. He threw two TDs and was intercepted twice.

Hainer had 83 yards receiving while Ivan Yanez had three catches for 78 yards and 1 TD. Jonus Guevara had four receptions for 40 yards and Lupe Martinez caught two passes for 36 yards.

Hainer carried the ball 26 times for 120 yards and scored three TDs. Coleman had 40 yards rushing on seven carries and one TD.

On defense, Coleman and Hainer both had seven tackles while Martinez and Alan Ayala both had 6 tackles each. Jon Rink and Bailey Hernandez added three tackles apiece.

“We will be back next year to make another run,” he said. “We're losing just one senior Jon Rink to graduation and we will be gaining a talented 8th grader with Dominic Coleman's little brother Maddox. He will be able to step in and make an impact.”

“I really need to speak to the entire Bobcat community because the support they showed us throughout this season was unmatched!” Marquez said. “Myself, my assistant coach (brother Tyndan) and the whole team want to thank them! So, keep an eye on these Bobcats because our boys really want to bring one (a state championship) home.”

No. 1 seed Fleming (8-0) advances to defend its state championship against No. 2 seed Stratton/Liberty (6-0) on Thursday, Dec. 3 at 2 p.m. at CSU-Pueblo’s ThunderBowl Stadium.

Cover: Granada’s Dominic Coleman leads the blocking for fullback John Hainer in action against Fleming during the Class A 6-man state semifinals on Saturday, Nov. 28 in Fleming. For the second time this season, Fleming rallied to score a late touchdown and won a rematch with the Bobcats 52-46. Fleming advances to defend its state title against Stratton/Liberty for the 2020 state title on Thursday, Dec. 3 in Pueblo. Photo: Karianne Donnelson