Kit Carson Boys Initiate Their New Gym With a Win 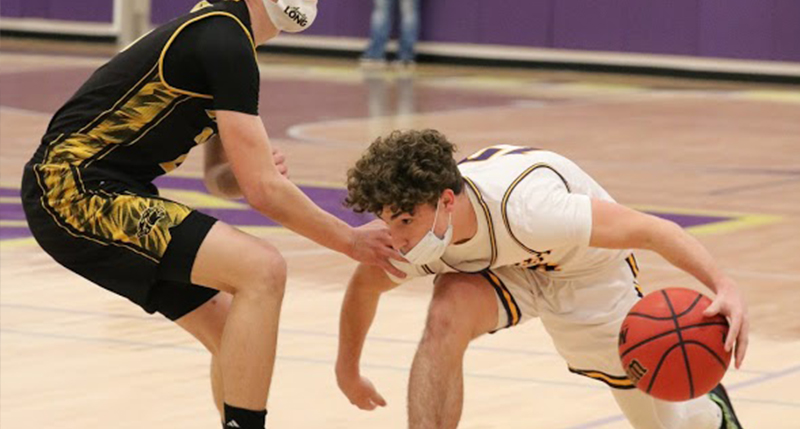 The versatility of the Kit Carson program can not be overstated as they are approaching this unusual basketball season in the same way they ended last year’s---philosophically.  Although they still don’t believe the way CHSAA ended the state tournament back in March was necessary, they have nevertheless taken it in stride.  This year is now a new time and a new team, and they have reorganized and are off and running again.  They opened the new gym in Kit Carson as they closed the old gym---with a win.

According to head coach Jason Dechant, “We executed well at times and looked as if it was our first game at times as well.  We passed and shot the ball well and rebounded well with a much bigger team.  Everyone contributed even those who came off the bench.  Paul (Mitchek) and Alex (Mitchek) and Brett (Mayhan) rebounded the ball extremely well which led to us being able to get out and get some easy baskets on the other end.   Sonny (Farmer) and Dan (Arnold) really handled the ball and offense well.  Prairie is a good team, and I was happy with our effort mentally and physically.”

In the Prairie game the visitors hung with Kit Carson in some respects until the final period when they seemingly ran out of gas only scoring two points.  At halftime the Cats had a 33-21 lead and would extend that lead as they moved forward into the second half.

On Saturday Dechant said he was impressed with Wiley, “Their physicality took its toll on us in the execution and shot making department.  Shots were heavily contested, and I don’t think we finished up to our standards.  It was nice to grind out the win though.”

The Cats jumped out to a 9-4 lead before the Panthers came roaring back into the game and outscored the KC bunch 12-11 in the second stanza.  At halftime it was a cat fight with the Wildcats leading the Panthers, 20-16.

New Wiley head coach Samuel Clayborn was overall happy with the way his team responded in the Kit Carson contest, “The team played well, just our approach in the beginning of the game had us out to a slow start which effected the entire game. Small mistakes made in the second half would determine the outcome. But I am excited to see the growth from game to game from the team and see a bright future for this season.”

Dechant agrees with Clayborn’s analysis, “Give Wiley credit as they battled and took advantage of their size mismatch.  We were able to ice it away with some strong ball handling and good free throw shooting down the stretch.  We were also able to get the big stop and rebound when we needed to.

Dechant knows this Week 2 is going to be a tough one with three games on slate, “This upcoming week will be a big grind for us.  We have three games.  The Limon game on Tuesday will test us big time as will Cheraw and Hi-Plains on the weekend.  Actually, this whole season will be a grind but we’re going to keep competing and being focused on the next game at hand.”