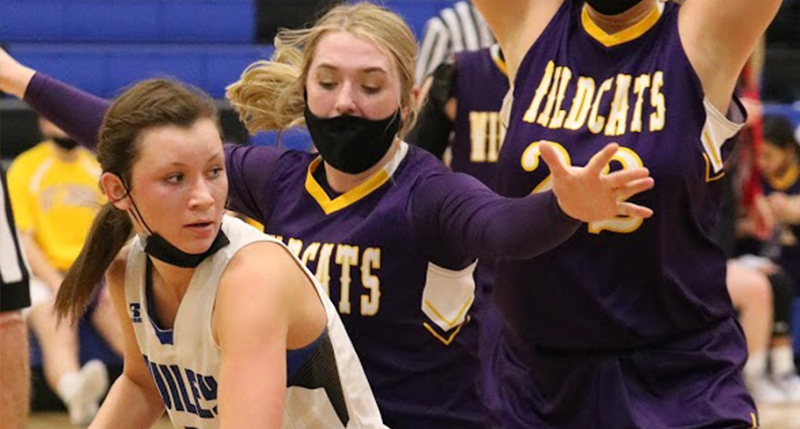 The Kit Carson girls have matured since last year’s campaign where they lost one main starting senior while the rest of them were just freshmen and sophomores, for the most part.  Over the first full weekend of preps basketball the Lady Wildcats established themselves as a possible powerhouse in the 1A ranks with two solid wins.  They defeated Prairie in their home opener with this being the first game in their new school’s gymnasium, 52-9.  They then got on the road and defeated the Wiley girls in a conference game, 73-43.

According to Wildcat head coach Sara Crawford, “It was good to be back on the court again.  We definitely had a good opening weekend.”

In their first game back against Prairie, Crawford said, “Going into the game with Prairie there was most definitely some nerves that had to be worked through, but it didn’t take long for the girls to get some momentum going.  It was fun to see players come out of their shells.  As fun as it was to watch the girls score, their passing was just as impressive.”

The Cats led 32-4 after the first half against Prairie as freshman Sedonia Isenbart dropped a couple of three balls and was joined by teammates Tieler Randel and Faith Johnson who each hit an early three ball.

During the entire game, Kit Carson’s big girls including Tess Johnson, Stephanie Framel and Cally Booker-Rady controlled the boards and didn’t allow any second shots by the out-manned Prairie group.

Tess Johnson led with 11 points and 6 rebounds.  Booker-Rady had 8 points and 4 rebounds and Isenbart matched that with 8 more counters.  Randel and Faith Johnson each had 7 points.

Last year Wiley upset Kit Carson when they had their backs against the wall in the second game of the season.  This year the Wiley game was going to be even more important since Wiley is the newcomer to the High-Plains league.

Crawford knew the Wiley game would be a big deal, “Saturday we traveled to Wiley for a much-anticipated game as last year we split wins in our two matchups.  We knew we had to stop them from getting to the hoop, but also from shooting the 3 ball.  We weren’t able to completely reach our defensive goal, but we made up for it on offense.”

The offense was on fire right out of the gate as the Wildcats poured in 25 points with six players scoring.  Allison Gekeler had the hot hand early hitting two of her four three-balls in the first quarter.  Randel had a third long ball out of the gates.  The scoring slowed down into the second period as the Wildcats only scored 8 points but held the Panthers to a goose egg.

Both teams came out furiously in the start of the third with the Lady Panthers scoring 23 points behind exceptional play from Macy Rowen, Taira Weber and Demi Wollert.  Weber hit two three balls, Rowen added two more, and Jaelin Parker added one.

Rowen led Wiley with 14 points, while Weber had 12 and Wollert added 11.

For Kit Carson it was Framel who led with 21 points and 7 rebounds.  Gekeler added 14 points, including 4 three balls, and also had 4 assists.  For the second night in a row Tess Johnson had a solid game down low with 12 points.  Randel added 9 points, including a three ball, and 3 assists.

Crawford was happy with the way her team opened the season saying, “The entire team contributed to the win in some way, whether that was with scoring, assists, rebounds, or defense.”

Next week the Lady Wildcats need to keep the momentum going as they have three upcoming games.  They’ll face off against one of the top 2A teams in the state in Limon on Tuesday.  The Kit Carson group then hosts Cheraw in a league game on Friday and Hi-Plains on Saturday.