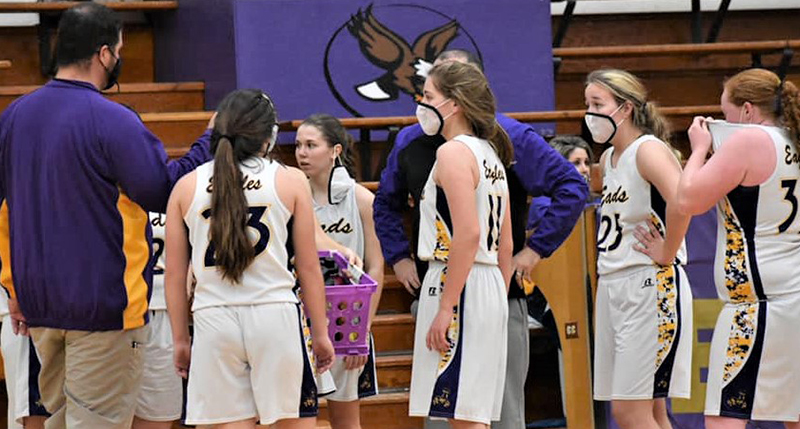 The 2021 version of the Eads Lady Eagles is one of the youngest Eads has had in a number of years.  There were only eight players on the court in the first weekend as two were injured.  Despite their inexperience, the Eads girls displayed a strong work ethic that notched them two nonconference wins including a 52-28 win over Flagler on Thursday night and a 57-20 win over 2A Las Animas on Saturday.

Head coach Trey Eder was pleased with the strong start his youngsters achieved, “It helped our confidence.  Especially as young as we are it helps our young girls gain that important confidence they are going to need.  We have good leadership from Ally (Spady) and Rhea (Rittgers) but after those two we don’t’ really have any game experience players on the floor.”

Eder didn’t know what to expect in the Flagler game, “They had just broken out of their coop with Hi-Plains, so we didn’t know anything about them.  We just tried to play our game plan and executed pretty well.  We inserted some offensive sets that we hadn’t done in Eads girls’ basketball.  This game was good for that.”

For the most part, Eads played a strong man defense against Flagler who struggled to get good opportunities at the hoop. That defense was key in this win.  However, early on Eder wasn’t very happy as the youngsters learned trial by fire, “Defensively we really had some things to work on.  Flagler took advantage of some of the holes in the defense.”

Offensively, the Eads girls scored in double figures in every quarter.  In the first quarter, senior Ally Spady diced and sliced her way into the paint numerous times scoring 8 points while freshman Maddie McDowell hit a long ball.  The scoring continued into the second period as the Eads group moved the ball well getting many shots and hitting a decent percentage of them.

The entire crew of eight players got a lot of playing time in this contest, which will pay off later in the season, no doubt.

Spady led the way with 19 points, 6 rebounds, 4 assists and 6 steals.  Rittgers put in 13 points and had 3 steals.  McDowell, in her first high school game, had a strong performance with nearly a double-double scoring 10 points and pulling down 9 rebounds.  Sophomore Samantha Courkamp grabbed 9 rebounds.

The Eads girls continued to use a strong defense and good offensive play on Saturday night when they hosted the 2A Las Animas Lady Trojans.  Again, Eder didn’t know anything about this team as Eads does not normally play Las Animas.  The Lady Trojans had some good size and were aggressive but struggled to score against the tough Eads defense.

The Trojans came out in a full court press, but Eads has one of the best point guards in the state in Spady who ran the floor into a number of fast break buckets.  Eads would score 19 point in the first quarter behind the shooting of Spady and Courkamp.

Defensively on this night, Eder was a bit more satisfied, “I really wanted to concentrate cleaning up some of the defensive problems.  We did that, I feel.  The girls listened and stepped up and we were better defensively.”

Next week Eads will travel to Hi-Plains for a non-conference game.  They then have a big home game on Saturday against new conference member Wiley.

Cover: The Eads Lady Eagles take the new administrative 30 second rest implemented by CHSAA in order to assist players who are being mandated to wear masks while playing basketball. Photo: Wilson Photography