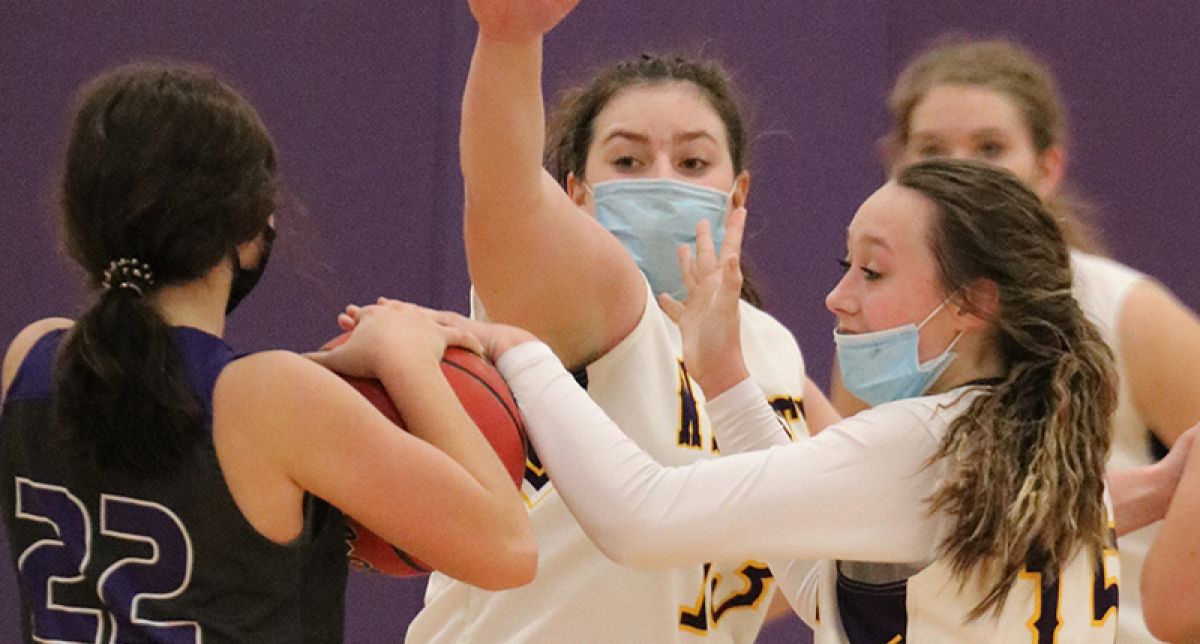 “Talk about a whirlwind of a week!”

Coach Sara Crawford was very pleased with the way her girls responded to the early-season marathon that occurred last week as the Lady Wildcats grabbed three convincing wins over Limon, 59-44, on Tuesday; Cheraw, 52-32, on Friday; and Hi-Plains, 57-24, on Saturday night leaving them undefeated on the season.

“Three games in five days takes a little getting used to.  It can be a bit overwhelming if you look at it as a whole, but if you just focus on the next thing, it makes it doable.  It has made us laser focused.  Taking advantage of every minute in practice has been key.”

The big week started off at Limon where just a year ago the Lady Badgers demoralized the Lady Cats as they were trying to break a near-impossible win-streak state record.  That night was definitely on the mind of not only Crawford, but of the current upperclassmen who were a part of that loss.  In reference, Crawford stated, “Probably one of the most satisfying games in quite some time was Tuesday against Limon.  I was extremely happy for the girls who had to endure losing to Limon last year ending our steak right before we broke the state record.  It’s something they haven’t been able to easily get over, but this definitely helped.  Senior Tieler Randel provided the spark we needed to pull ahead, and our awesome team play kept us ahead.   Our “bigs” played extremely well, shutting down Limon’s main scoring threats.”

The overall key to the Cats’ success in Limon was the fact that they shot extremely well.  From the field they hit 47% of their shots and they were at the free throw line 38 times hitting 50%.  Limon, on the other hand, was cold shooting 32% and was only 7-for-19 from the charity line.  The Lady Badgers did out-board the Cats pretty substantially, 49-23.

But it was the all-out effort of the Cats, and particularly the senior leadership, that was the difference in the contest.  Kit Carson would win the game in the first half as Limon picked it up in the second half.  Randel led all scorers with 14 points, including 3 long balls.  Freshman Sedonia Isenbart had a substantial game, as well, hitting for 11 points, including a couple of 3-balls, pulling down 7 rebounds, and contributing 3 assists and 3 steals in the contest.  Senior Faith Johnson added 7 points, Tess Johnson had 7 rebounds, Faye Buttry kicked in 5 more rebounds, and Stephanie Framel ran the show with 5 assists to her teammates.  Eleven Lady Cats got in the scorebook.

As for the weekend, Crawford was optimistic with her girls’ overall performance, “The following two games with Cheraw and Hi-Plains were well-rounded offensively and definitely it was more of a full-team effort than due to any one standout.  Many players contributed in these successful games.”

When Kit Carson hosted league foe Cheraw on Friday night it was a grind in the first half with both teams battling back time and again under strong defensive pressure.  By halftime, the Cats had the small advantage, 22-16.  But in the final half, particularly the third quarter, the Wildcats controlled the pace and scoring of the game hitting for 30 while the Wolverines struggled, never getting to double figures in either quarter.

The Hi-Plains crew was short-handed and were coming off a close defeat against Eads from the night before.  The offense for Kit Carson was on fire scoring 16 points behind a trey apiece from the Randel sisters, Tieler and Torrie.  Johnson and Framel were tough in the middle, as well.  The Cats led 26-11 after the first half and would continue to score in double figures through the second half.

Kit Carson enjoyed production from 10 players with Johnson, again, leading in the scoring with 10 points.  The Randel sisters each added 8 points, while Isenbart also put in 8 counters.  Framel threw in 6 points, while Allison Gekeler added 4 points.  The Booker-Rady sisters, Cally and Payge, also added 4 apiece to the cause.

Crawford is glad her team is on a roll and focused on what needs to be done because they are about to face another three-game week of basketball, “We have another full week as we face Simla at home (Tues., Feb. 9), Granada at home (Fri., Feb. 12) and Fleming away (Sat., Feb. 13).  Again, the focus will be progress over perfection.”