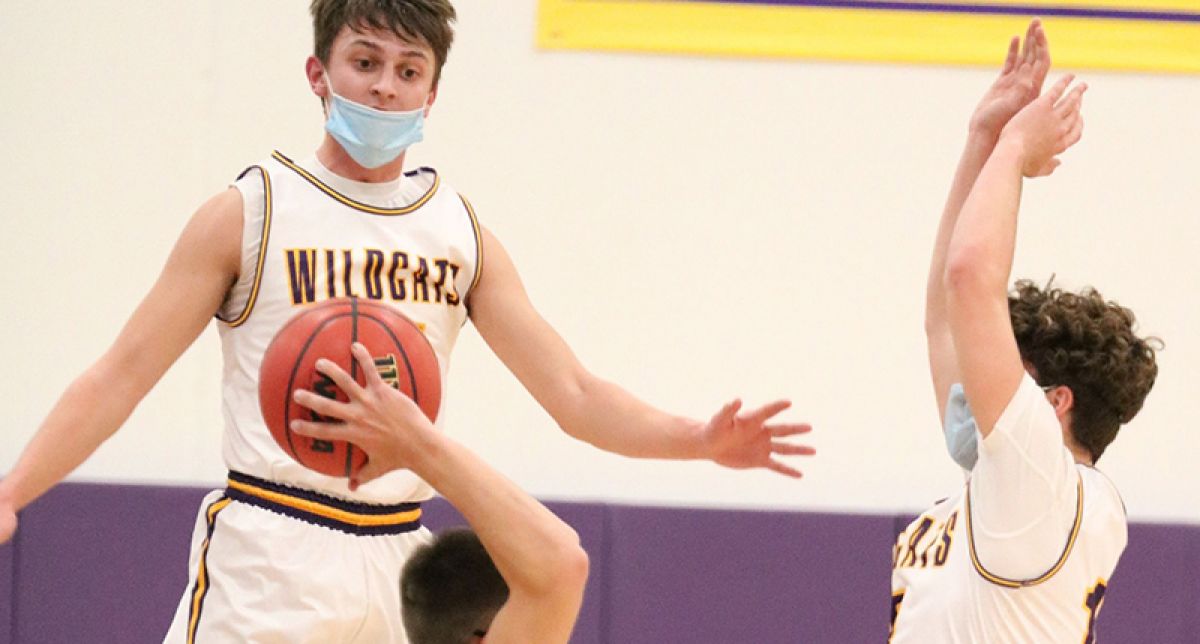 It was a tough week of basketball for the Kit Carson Wildcats as they played in a three-game marathon over the course of the week but was unable to come up with a win.  On Tuesday, they traveled to Limon to take on the current #1 team in 2A and came away with a solid beating, 69-32.  Then, over the weekend, the Cats lost a conference game at home against a tough Cheraw group, 48-31.  They finished in Hi-Plains on Saturday night and again struggled against a much larger team losing 48-25.  The Cats are now 1-3 on the early season.

Despite the three losses over the week, head coach Jason Dechant is optimistic about his young and inexperienced team that only has two seniors aboard.  Dechant found good elements of development in his team in each of the games that included players gaining more confidence in their offensive skills, strong rebounding and continued hustle.

Dechant knew Limon would be tough, “Limon is a very good team.  They’re ranked #1 in the 2A ranks for a reason.  They’re experienced and I don’t think we were ready for their pressure as well as we should have been.  That’s on me.  The Limon game was a good learning experience that will benefit us down the line.  One bright spot is I actually thought we rebounded right with them, although they were much bigger than our group.”

The Cats got behind right away in the Limon contest as they found themselves trailing 19-2 after the first quarter.  Limon used a run-and-gun offense to blow the game open right away.  Kit Carson only managed a single field goal by junior Paul Mitchek.  Although Limon scored 13 more in the second period, Carson found some room to score with Sullivan Farmer and Brett Mayhan each hitting a field goal and junior Alex Mitchek nailing a three ball.  The KC bunch would get hot early in the third with Danial Arnold hitting two of his three balls on the night and Tanner Conaway and Alex Mitchek each adding long balls of their own.  The Cats scored 16 in that stanza, but unfortunately Limon came on strong toward the end of the third and would score 20.  That would be a backbreaker for the Cats who struggled throughout the fourth quarter.

No Cat would get to double figures in the low-scoring affair, but Arnold did hit for 9 points, all from behind the arc.  Alex Mitchek added 8 points, while Paul Mitchek pitched in 6 more counters.

On Friday the Cats hosted a good league team in the Cheraw Wolverines.  They have a couple of players who represent the size and speed that bothers teams across the league.  In reference to the Cheraw game Dechant stated, “Cheraw is a good team with a game changer in the middle on defense in the Pearce (Trey) kid.  His presence forced us to take way too many 3’s and he altered a number of our shots in the paint.  Defensively the third quarter was the difference.  Harris (Braeden) is very quick with straight line speed and we had a difficult time containing him.”

Dechant is exactly right as Pearce and Harris did basically all the scoring for the Wolverines.  Pearce would score 16 points in the contest while Harris added 24 more.

Pearce led the way in the first quarter leading Cheraw’s 16-point performance with 8 counters.  Kit Carson could only muster 8 points behind some nice work by Brett Mayhan who scored 5 in the stanza.  The Cat defense held the Wolverines to just four points in the second quarter but could not capitalize themselves and could only ride an Arnold three-ball, a layup by Mayhan and a couple free throws by Sonny Farmer.  As the Cats struggled to score in each stanza the Wolverines eventually got back on track.  Cheraw would finalize the conference win in the third quarter where they outscored the Cats 17-8.

Dechant liked some of what he saw, “The bright spot was that Brett and Paul played well and started taking the ball to the basket much better in the second half.”

Mayhan had a standout game for the Cats scoring 13 points.  Farmer and Arnold each added 5 more.

In their final game of the week the Cats traveled north to Seibert to the home of the Hi-Plains Patriots.  Dechant said his team struggled with HP’s size, “We tried to settle for three balls instead of working the ball inside against teams like Hi-Plains who are bigger.  Unfortunately, as Dechant surmises, “We’re not shooting the ball very well and nothing is coming easy for us right now.”

The first quarter saw a flurry of up-and-down action as both teams got well into the scoring column.  The Patriots would, however, outscore the Cats in the first quarter, 18-10, and then extended that lead to 27-15 at the intermission.  Farmer led the Cats on Saturday as he went toe-to-toe with the Patriots hitting for two early three balls.  In the third quarter, the Cats slowed things down a bit and stayed even with the Patriots but could gain nothing back.  They would finally feel the effects of a long early-season week of ball hitting a wall in the fourth quarter by only scraping together a jumper by Farmer and a free throw by Paul Mitchek.

Farmer led the Cats with 15 points, while Arnold chipped in six more.

Despite it all, Dechant is happy about how his team is progressing, “I’m proud of the way we’re competing right now, and we’ll continue to try and improve week in and week out.”

They will have three more chances next week as they face a repeated heavy schedule.  On Tuesday, the Cats welcome Simla to the Wildcat Den.  They then host a very important conference game with Granada on Friday.  Finally, to top off the grueling week they get to board the bus to take on an always tough opponent at Fleming on Saturday night.

Cover: The Wildcat defense tries to deflect the pass from a Cheraw player during District 2 action in Kit Carson. Photo: Mayhan Photography