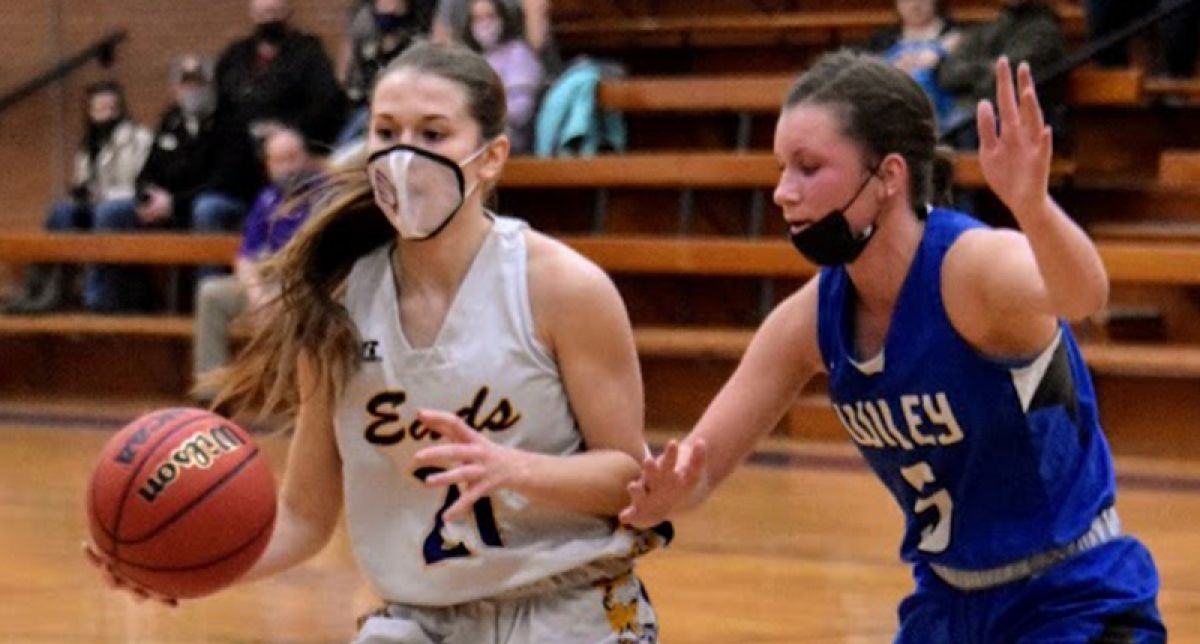 Over the weekend the Eads girls suffered their first loss in a 48-26 game against Wiley on Saturday that was much closer than the score indicated.  On Friday night the Lady Eagles warded off a last quarter run by Hi-Plains getting the win, 36-33.  Eads is now 4-1 on the early season.

Eads came out hot against Hi-Plains on Friday night and grabbed an 11-5 lead after the first period.  However, by the end of the second the somewhat short-handed Eagles got winded and their level of play dropped off.  The first half for Eads was all Rhaelie Rittgers who paced the Eagles with 12 points.  In the second period, just when they needed it, sophomore Sam Courkamp hit a key long ball.  Hi-Plains was able to keep the score decent at the intermission still trailing, 21-18.  The rest of the game was dead even as both teams struggled offensively against the man defense put on both ends of the floor.  They matched scores in the third, 7-7, with Courkamp keeping Eads in the game with a trey and a deuce.  But it was the final period that was quite concerning for Coach Eder and the Eagle fans as Eads made an early run behind a couple of buckets from Rittgers, but then allowed Hi-Plains to get within one point late in the contest.  Two key free throws by senior Ally Spady and a game-ending rebound by Courkamp secured the win.

Rittgers led all scorers with 17 points and put in a double-double performance adding 13 boards on the night.  Courkamp had a solid game with 8 points, including a couple of shots behind the arc, and 7 rebounds.  Spady struggled with her shooting all night but her floor game was strong as the senior added 6 points, 5 boards, and 4 assists to the Eagle tally.  Freshman Maddie McDowell was also key in the win pulling down 5 rebounds and getting 3 steals.

Eads’ only loss came against Wiley on Saturday night in Eads.  Head coach Trey Eder described what happened in the loss, “It was a good game against an opponent we knew was pretty good.  We started the game okay and kept it close for three quarters.  We battled throughout and defensively stepped up as we had about as bad of a night shooting as we possibly could have.  Wiley hit the deep ball really well and we didn’t.  I liked the way we battled through the game despite our offensive struggles and had a chance until Wiley capitalized on some turnovers and put the game out of reach for us.”

Eads actually led for most of the first quarter until a strong Wiley transition layup at the end of the first gained them the lead, 12-11.  The two teams continued to battle defensively with both teams getting good looks at the bucket.  However, Eads was absolutely stone cold, particularly when they got winded late in the first half.  Spady and Rittgers kept the Eagles in the game during those first two quarters.  By halftime, the Panthers had nudged out to a 22-16 lead.

The third quarter was much of the same as Eads jumped out early and came within a bucket of the Panthers before the Wiley group got in their rhythm with their run-and-gun transition offense.  Wiley outscored Eads 12-9 in the third and the fast-paced quarter took a lot out of the Eagles.  By the fourth, Eads was gassed and only scored 1 point in the quarter, while the Wiley group put an exclamation point on the quarter hitting for four of their impressive nine long balls on the night.

For Wiley it was senior Taira Weber who crushed the Eads defense hitting for 21 points, including four baskets deep behind the arc.  Demi Wollert add 11 more with 3 long balls of her own.  Macy Rowen, the rough and athletic floor captain who takes on the tough defensive assignments for the Lady Panthers added 8 more points and pulled down 14 boards, had 5 assists and a steal.  Jaelin Parker and Fatima Gomez each added a three ball, as well.

For Eads, only Spady got into double figures hitting for 10 points.  The senior also pulled down 4 rebounds and had 3 steals.  Rittgers added 7 points and grabbed 6 boards, while Courkamp chipped in 5 points, and sophomore Maggie Haase controlled 5 rebounds.

It is now time for the Eads Lady Eagles to get to work as they will have a full slate of games this week starting with a feisty Granada group on Tuesday at home.  They will then be on the road this weekend at McClave on Friday night and Cheyenne Wells on Saturday night.  All three games are key conference matchups.

Eder can’t emphasize enough how important this week is for Eads Girls’ Basketball, “We must learn from the mistakes and then move on as the season is short and there’s no room to give any games away.”

Cover: Two of the top guards in the conference went head to head on Saturday night in Eads. Ally Spady brings the ball up against intense defensive pressure from Macy Rowen. Photo: Nita Walls