Written by Betsy Barnett on 11 February 2021. Posted in Sports 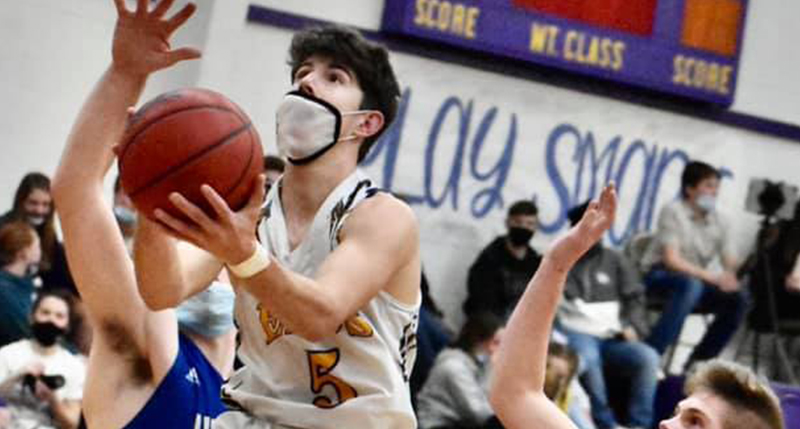 So far so good for the Eads Eagles who are currently sitting at 3-0 on the season after getting two more wins over the weekend including a 52-48 win in Hi-Plains over the Patriots and a convincing 62-49 win in Eads over conference rival Wiley on Saturday.

Head coach Marcus Gilmore was, for the most part, happy with the progress his team is making, “We had two good wins over the weekend that were definitely earned.  Hi-Plains and Wiley were almost the exact same matchup for us as far as height and physicality.  Rebounding was the main issue for us on both nights.  That’s something we definitely have to work on in order to keep winning games.”

At Hi-Plains the Eads boys struggled a bit with the size of the Patriots, but they came out strong and managed to outscore the hometown boys 15-9 behind two deuces and a trey from senior Damien Barnes and a couple of attacks at the hoop by freshman guard Porter Spady.  Eads continued to control Hi-Plains with a strong half-court 1-3-1 trap resulting in a 10-5 result in the second period.  The Eagles got a couple more buckets from Barnes and then Spady, Ty Wilson and Hatch Nelson chipped in.  Eads had a comfortable lead at the intermission, 25-14.

But the Eagles came out sluggish in the third and the Patriots had made some offensive adjustments that resulted in big buckets for Nick Schroeder who lit up the cords with a couple of jumpers, a couple of long balls and a couple of freebies in the third.  Zayd Banks also added a three ball and all of a sudden, the Patriots took the lead.  Late in the quarter Cade McDowell and Ty Wilson helped Eads hold on when each junior hit two longs balls apiece.  Eads led by just three going into the final period.  Luckily, the Eagles responded well and went out to win the game despite falling behind midway through the final stanza.  Senior Brandon Lening helped out with a three ball, and Barnes, Spady and Wilson each went perfect down the stretch from the free throw line.

Barnes led Eads with 16 points and 6 rebounds, while Spady had a strong game hitting for 10 points, grabbing 7 boards, and contributing 3 assists and 2 steals.  Wilson had 10 points, as well, including back-to-back long balls in the third.  McDowell mirrored Wilson’s effort with 2 long balls on his way to 8 points.  Nelson grabbed 4 boards.

The win set up an impressive home appearance by Eads when they hosted the newest kid on the block, Wiley, into the High Plains League.  Wiley is big with a sophomore back line that stands 6’ 5, 6’4 and 6’4.  It was a fun game to watch as both teams are athletic, and the action was aggressive and fast-paced.  The Eagles jumped out to a huge lead in the first outscoring the Panthers, 23-9, and never looked back. In that quarter it took the Panthers many possessions to contend with senior Hatch Nelson who was a huge threat on the top of the 1-3-1 half court trap.  Nelson had 6 steals in the contest including four in the first quarter where he poured in 10 points on layups.  Barnes was a huge presence inside and earned his stripes battling the big Wiley back line.  Brandon Lening slowly warmed up hitting one of his five three-balls in the first.  The scoring for Eads slowed down somewhat in the second as Wiley figured out how to break down the big zone Eads was running.  However, Lening hit another three-ball and McDowell slipped in another long ball controlling the scoring for the Eagles.  Panther sophomore Jace Parker added a couple of three balls to keep pace with Eads.  By halftime, Eads had the advantage leading, 37-19.

In the second half Eads’ aggressive defense started to get them in some trouble as Barnes, Nelson and Wilson were each forced to take a seat for some time during the fast-paced second half.  The result was Wiley won both quarters out-scoring Eads 30-25 in the two stanzas.  As Wiley pushed with many of the starters out for Eads, senior Joe Haase battled the bigs down low and Lening threw daggers into the Panther’s run by hitting a couple of treys in the third and key long ball in the fourth.  Barnes, Spady, McDowell and Wilson each hit free throws down the stretch with the team going a perfect 10-for-10 in the final minutes.

For Wiley it would be Parker and sophomore Cooper Tixier who each put in 14 points in the contest.  Sophomore Devon Jacobs scored 8 more.

For Eads, Barnes was key to the win putting in a hard-earned double-double performance with 13 points and 10 rebounds.  The senior also had 7 assists and 4 steals.  Lening led all scorers with 17 points behind the five long balls.  The senior guard also pulled down 7 boards.  Nelson added 16 points on aggressive play at the top of the defense.  Spady added 9 points, had 5 rebounds, 2 assists and 3 steals.  McDowell also chipped in 7 points, 4 steals and an assist.

Eads will now put their undefeated status on the line in a huge week that includes two conference games.  In the first game, they host conference foe Granada, who is also undefeated, on a rare Tuesday evening.  Eads is then on the road to McClave on Friday.  Both games are key conference contests.

Gilmore knows this is an important week in the conference, “This week we have two more district games that are a must win for us including Granada and McClave.  The Cardinals will still be somewhat young but should be improved.  Granada will be one of the tougher teams in our district that we will face.  We match up pretty well with Granada, and our last three games against them have all been down to the wire.  This year should be no different, so we are looking forward to playing them on Tuesday.”

Cover: Eads guard Porter Spady slices and dices his way to the bucket as Wiley's Evan Larrick tries to stop him during Hi-Plains League action in Eads on Saturday night. Photo: Wilson Photograpy