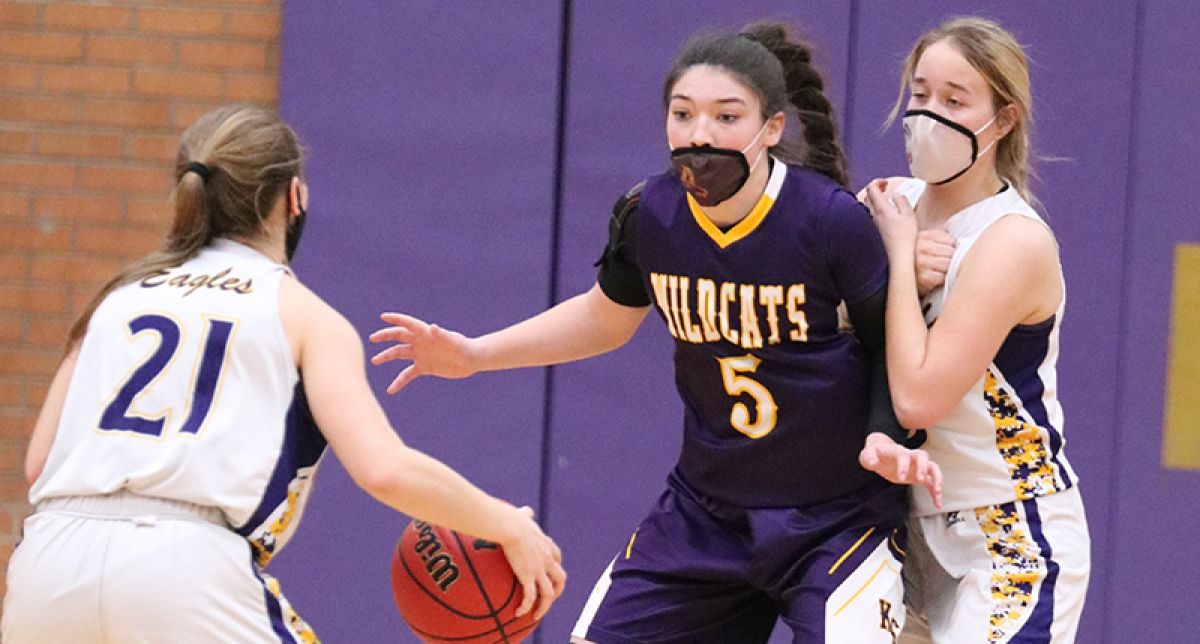 The feisty Eads Lady Eagles won two of three games over the week grabbing an ugly victory over league foe Cheyenne Wells, 29-19, on Tuesday and another win over non-conference Manzanola on Saturday, 37-14.  However, in between those two wins was a HPL loss to the undefeated Kit Carson Lady Wildcats on Friday, 52-35.  Eads is now 6-3 on the season with just two weeks to go in the regular season and are hoping they can make enough noise in the ratings factor to qualify in the 24-team post season tournament.

On Tuesday in Cheyenne Wells the Lady Eagles actually got behind the 2-16 Lady Tigers during the first half and would go to the lockers trailing in a slow-paced and low-scoring game, 13-7.  But the Eads defense adjusted and came out strong holding the Tigers to a goose egg in the third and just three buckets in the final stanza to grab the conference victory.

Eads head coach Trey Eder spoke about the Cheyenne Wells game, “In Cheyenne Wells we didn’t play particularly well but we played well enough to win.  That’s what you ultimately have to do.  We saw a few things to work on for practice on Wednesday and Thursday.  Our shooting wasn’t very good, so we worked on that putting some time in.  We have to continue to concentrate on that part of our game.”

Eads, as a whole, shot a dismal 20% from the field and just 50% from the free throw line.  They did hit four three-balls with two of them coming when they needed them in the final stanza.

No one on Cheyenne Wells’ team scored in double figures.  Sydney Dickey led with 5 points.

On Saturday, Eads could not match up with the much bigger Kit Carson team who used the inside presence of 5’ 11 Stephanie Framel and 6’ 0 Tess Johnson to control their offensive attack.  Eads battled and held their perimeter shooters in check but didn’t have an answer inside as they were using two freshmen to hold down the fort.  Despite being outmatched, the Lady Eagles were in every quarter and played a complete game.

Eder was impressed with how his girls battled against the Cats, “Against KC we played overall one of our best games of the season.  They’re just a good team and they have tremendous size.  They used that size effectively against us as we struggled to stop their inside game.  We knew if they went inside it was going to be tough to stop them with our personnel being so out-sized down low.  Our Bigs are really young too.  We knew we had to have the help from the guards, but we couldn’t get it enough and they do a good job of playing inside to outside.  Overall, we shot well, and defensively we played as best as we could besides the inside.  We cut the lead down to single digits a few times.  Right at half we cut it down to under 10.  Then in the second half they brought it back up to 18-20 points and we cut it down again to 9 in the third quarter.  We battled well but ultimately couldn’t hang with their inside dominance.”

Spady had 10 points, 3 rebounds, 3 assists and 3 steals in the loss.  Freshmen Katie Johnson and Maddie McDowell, who battled admirably down low with the Bigs all night, put in 6 points apiece.  Rittgers chipped in 4 rebounds.

By Saturday night the Eads girls were ready to get back in the win column and exploded for 19 points in the first quarter against Manzy.  Rittgers, alone, scored the first 12 points of the contest as the junior stole the ball for layups on numerous occasions.  The rest of the way was for the JV group who got a ton of much-needed court time.  The scoring was low, but a lot of good things happened during the rest of the game where the bench put in some aggressive hustle time.

Rittgers led all scorers with those 12 points, while Maggie Haase, Johnson, Brianna Habinck and Rachel Kopasz all contributed four points apiece to the cause.

Eder is excited to get to work this week starting with a key conference game with Cheraw on Tuesday, “Coming up this week we have a big league game with Cheraw.  We need to win that one based on where we stand on RPI in order to be in the top 24 teams.  Also, on Friday we play a top team in the 2A ranks in Crowley County.  Both games are important for us.  We’re looking forward to see what we can do.”