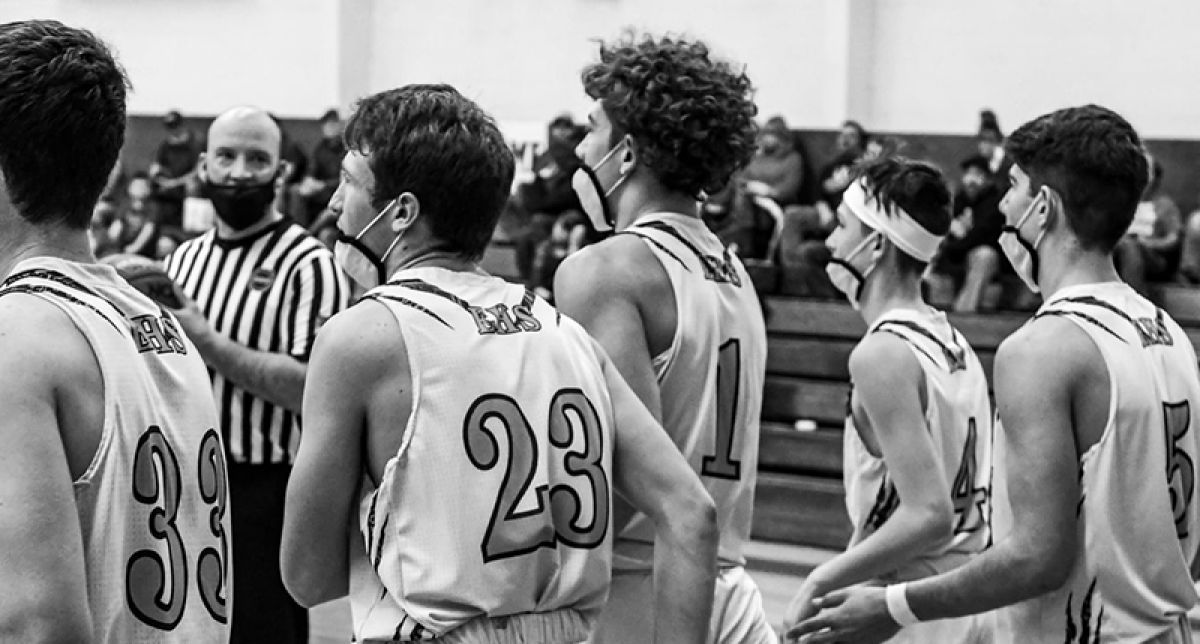 The extreme brevity of the CHSAA Season B makes for some interesting situations and the Eads boys’ basketball team found themselves in one of those last week when a make up game resulted in the Eagles playing four games in 5 days.  That’s a lot of basketball in a short amount of time.  Eads started the marathon week the same way they left the week before against McClave when they played perhaps their worst game of the season.  However, they found a new low in Cheyenne Wells as the feisty Tiger defense put pressure on Eads that they were not ready to contend with.  They would lose their second precious conference game in poor fashion, 40-34.  However, by Thursday the Eagles were soaring and stayed in the air all weekend by grabbing three big wins in three days including wins over Flagler, 62-24, on Thursday, Kit Carson, 69-35, on Friday and Manzanola on Saturday, 77-32.  Eads is now 7-2 on the season and 2-2 in the league.

Eads head coach Marcus Gilmore was not happy with the way his boys showed up in Cheyenne Wells on Tuesday, “We had a rough start to the four-game stretch losing to Cheyenne Wells.  We were a starting guard down and coming off of a tough loss at McClave.  We have no excuses though Cheyenne Wells had great ball pressure and applied it the whole night.  Turnovers are definitely what got us beat in that game.  It’s a pretty crazy stat when you turn the ball over just as many times as you have field goal attempts.  Just won’t win that many ball games playing that way.”

In that game only senior Damien Barnes was in double figures with 13 points and 5 rebounds.  Brandon Lening added 8 counters, 3 rebounds, 2 assists and 2 steals while Hatch Nelson added 4 points and 4 rebounds.

For the Tigers Ty Scheler led all scorers with 14 points, while Blake Gilmore and Kody Ryser each chipped in 8 more apiece.

After that debacle in Cheyenne Wells, the Eagles stepped up their game and made some huge strides in preparation to finish the season strong.  The starters put major pressure on the ball in all three games earning big leads that allowed the Eads JV group a lot of much-needed court time.  Gilmore observed, “Anytime you have four games in one week you know it’s going to be a long week.  We were fortunate enough to be able to use our bench and save some of our legs in some of those games.  It was key that we got our younger guys in on the opportunity to play and I thought they did a great job.  We don’t have enough for JV this year so those guys getting the chance to play was awesome to see them get out there and show what they can do too.”

On Thursday the Flagler Panthers were in town and Eads jumped on them right away using a big 1-3-1 half court trap that resulted in numerous steals and layups for the Eagles.  They would be up 22-3 after the first quarter allowing the bench plenty of opportunity to get much-needed experience.  The team, as a whole, had 35 rebounds and 27 steals on the night.

The next night the always well-coached and traditionally strong Kit Carson group came to Eads for a key conference game.  Eads used that strong half court trapping defense to get 23 steals and 30 rebounds. Gilmore knew the Kit Carson game was important for his boys to get back on track, “That was a must-win conference game for us and to win like that at home was a huge momentum boost for us before we play Cheraw.”

This was a fast-paced game that saw a lot of exciting action on both ends of the court for most of the game.  The Eads bunch outscored the Cats 21-9 in the second period, ultimately closing the door on a comeback.

Barnes had a tremendous game, particularly down low where he took the ball to the basket successfully most of the night.  The senior would have 24 points, 7 boards and 5 steals.  Lening hit three long balls on his way to 13 points, 4 rebounds, 3 assists and 4 steals.  The phenomenal play of freshman Porter Spady is a game-changer for the Eagles as the new-comer added 12 points, 5 rebounds, 2 assists and 5 steals to the tally.  Nelson added 9 points and 5 steals at the top of the half court trap.  McDowell was steady with 7 points and 6 rebounds.

Unfortunately for the Cats, their senior point guard and leading scorer Sonny Farmer got in foul trouble right away in the first period and could never get into a rhythm in the contest.  He would add a three ball in the third period to spark the Cats until he pulled his fourth foul.  His usual intensive defensive pressure was not able to be there against Eads as he was trying to avoid getting any more calls.  This fact hurt the very young Wildcats perhaps the most.  But the rest of the team picked up the intensity and played with high energy.  Only Alex Mitchek reached double figures with 11 points.  Brett Mayhan and Danial Arnold each chipped in 7 more.

Finally, on Saturday against Manzy, the varsity players got a much-deserved rest in the second half of what was a fairly close contest at intermission.  Eads played sluggish and missed a lot of shots throughout the first half.  They would only be up 27-14 before they took things to another level entirely at the start of the third period.  In the third they rattled off 20 points before the Bobcats ever got a shot.  The JV group put time in most of the third and most of the fourth period and it seemed the Eagles never missed a beat.

Nelson, at the top of that tough 1-3-1 half court trap scored 17 points and is looking confident in his shooting.  This is going to be a key asset for the Eagles going into the final weeks, and hopefully post season.  The senior also added 3 steals and 3 rebounds.

The Eagles have to challenge undefeated Cheraw on Tuesday in Cheraw as this is a conference win that the Eagles need.  They then host 2A Crowley County on Saturday for a non-conference contest.