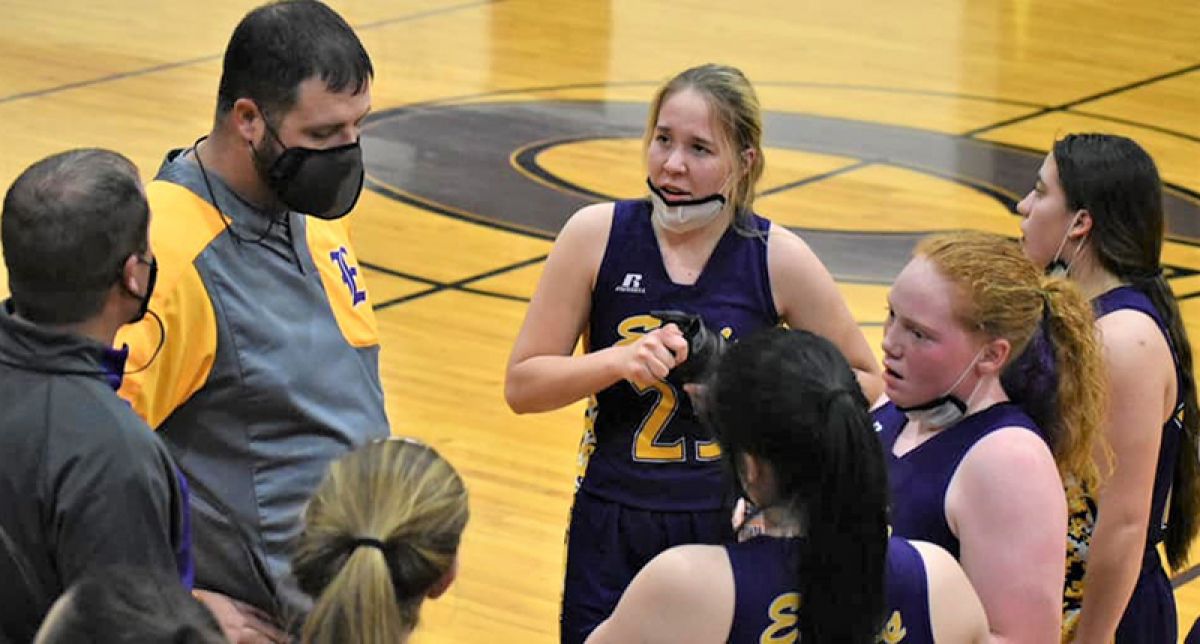 The Eads girls entered the week with a decent RPI rating and was just within the boundaries of the twenty-four team max that will qualify for the post season.  Things looked great for Eads as they grabbed a key conference win over a good Cheraw group on Tuesday, 50-42.  But that game cost them the services of starting guard Rhaelie Rittgers and by Friday night they took a major tumble in what all would agree was an ugly loss to Crowley County in overtime, 32-30.

The Lady Eagles now have a tall order in front of them.  They will face off with South Baca and Kim/Branson for their last games of the regular season this week.  Both teams are highly ranked so a good showing against both could help the Lady Eagles find their wings once again.

Head Coach Trey Eder knows its now crunch time for his young Eagles after their fall out of the nest against Crowley, “That loss hurt us bad.  It was a game we needed to win, a game we should have won, and it was a game we just didn’t.  We missed Rhaelie a lot as she is a huge difference maker on the team.  We definitely needed her out there for her leadership on the floor.”

Eder went on to say, “If we can get a good week of practice in that will be key.  Besides Rhaelie being in doubt, Ally (Spady) is also hurting a lot too with the wear and tear on the season.  These are two big games.  Both Kim and South Baca are both highly ranked teams and we’re going to have to go in there and try to play the best game we possibly can.  For us to make the playoffs we will need one of those two games to sneak in there.  Hopefully, we can do that.  We’ll work on our shooting and our offensive game.  Defensively we’re okay but we need to clean up some mental mistakes.  We’ve got to put it on the line and hope for the best for the playoffs.”

The Cheraw game was a solid game for the Eads girls who used a 17-point second quarter to ultimately shut the door on the Wolverines.  Spady had one of her better games of the season pouring in 21 points, including 2 long balls, and grabbing 7 rebounds.  The senior also had 5 steals.  Rittgers, before she was injured in the fourth quarter, had 16 points and 2 steals.  The rest of the starters also contributed with Sam Courkamp coming through with 7 points and a whopping 15 rebounds.  Freshman Maddie McDowell contributed 6 points, using long ball action, and freshman Katie Johnson pulled down 7 boards, dished out 2 assists and stole the ball twice.

Without the services of Rittgers on Friday night against the Chargers the Eads girls struggled mightily throughout the contest.  Spady was also only 50% and with severe shin splits left many of her shots short.  But the senior would make a final push at the end of the game getting the lead with .50 left in the contest on a nice drive to the hoop, 27-26.  The Chargers came back and scored with less than .30 seconds remaining.  Sophomore Maggie Haase made one of two free throws to send the game to OT.  During that four minutes Spady got Eads the lead 30-28, but the defense broke down and the Chargers hit the winning bucket with just .11 seconds remaining.  Eads had their chance to tie the contest but turned the ball over.

Spady had 12 points and 8 rebounds in the contest.  McDowell scored 5 points and grabbed 4 steals; Haase had 5 points and 5 rebounds and Johnson was key on the boards grabbing eight.

Cover: The Eads girls takes a time out in Cheraw on Tuesday night. They would ultimately grab a key HPC win 50-42 over the Wolverines. Photo: Wilson Photography