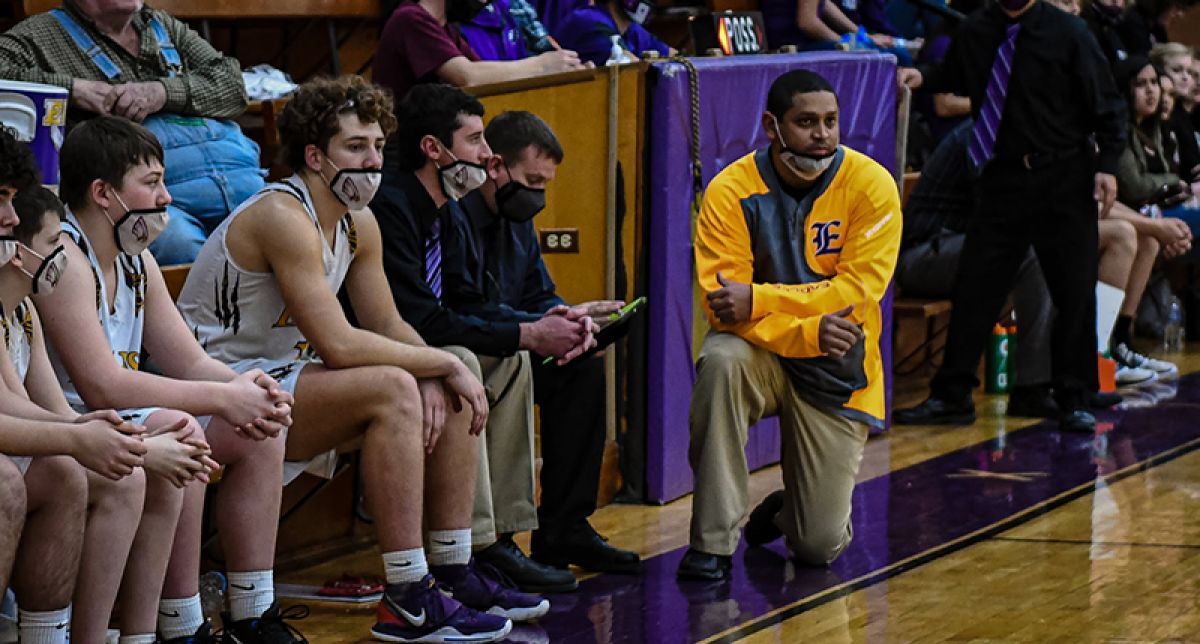 The road has not been a friend to the Eads Eagles as all four of their losses have occurred out of town.  They are going to have to get over their jet lag, or in this case bus lag, this weekend if they are going to have a chance at getting in the playoffs.  Over this past week the Eagles lost a key game to one of the best teams in the state Cheraw.  A team that has size and speed and uses salty defensive pressure on their opponents.  Eads played the Wolverines well but ultimately dropped the contest, 45-36.

They then spent a couple of weekend games at home toppling Crowley County in a barnburner, 44-43 and then taking care of a struggling Walsh group, 62-27.  They are 8-4 overall on the season and needing to grab two wins this week to finish off strong.

Marcus Gilmore continues to use his big 1-3-1 half court trap defense against opponents, and it worked pretty well over the course of the week when, that is, the Eagles would play aggressively and rebound on the back side.  When they didn’t, Gilmore knows things can get ugly real quick.

Gilmore had plenty to say about the Cheraw game, “We battled it out with Cheraw, but in the end we just didn’t make enough buckets to win the game.  We had good energy and our defense was great the whole night.  They just hit a few big shots at the end, and we didn’t.  They are a top-ranked team and they had us down big early in the game and we never gave up.  We were able to battle back and make a ball game out of it.  It seems like we were just never able to get the lid off the bucket.  We were in position a few times to take the lead, but we just weren’t able to convert.”

Gilmore was impressed with the way the Crowley County team rebounded against his Eagles, “Crowley County was a good rebounding team that we had a problem with the whole night.  The majority of their points came off offensive rebounds and put backs.  It was just one of those holes we were never able to plug the whole game.  Offensively we struggled but we were able to hit some shots at the end of the game and was able to squeak that one out at the end.”

Eads particularly had trouble with 6’ 5 Terrance McNeil who did the bulk of the Charger scoring pouring in 29 points, most of them off of offensive boards.

The Walsh group struggled against the 1-3-1 trapping pressure Eads put on them during Saturday night action in the Eagles’ Nest.  Eads would run up 22 points against a lone 3 ball from Walsh in the first quarter.  The scoring remained in that atmosphere until the fourth quarter when the Eads JV came in and continued to play up and down ball with the Eagles from the deep south.

Lening, again, had a good time downtown as the senior hit four more long balls on his way to a 20-point performance.  He also pulled down 6 boards.  Barnes added 12 points, McDowell poured in 16 points, while Joe Haase, Spady and Hatch Nelson all ran the show combining for the bulk of the rebounds, assists and steals in the contest.

The upcoming road trips are vital to the Eagles’ future.  They have to learn to win in enemy territory if they’re going to make any noise in the playoffs.  Eads takes a tour of the deep south this week as they have dates with South Baca and a very good Kim/Branson group.

Gilmore knows this week has to be successful, “The way this season is set up every game is a must-win to get into the playoffs.  It would be nice this year since there is no districts or regionals to host one of the playoff games at home.  We are sitting in a good position to be able to do that, but we have to get two more wins on the road for that to happen.”