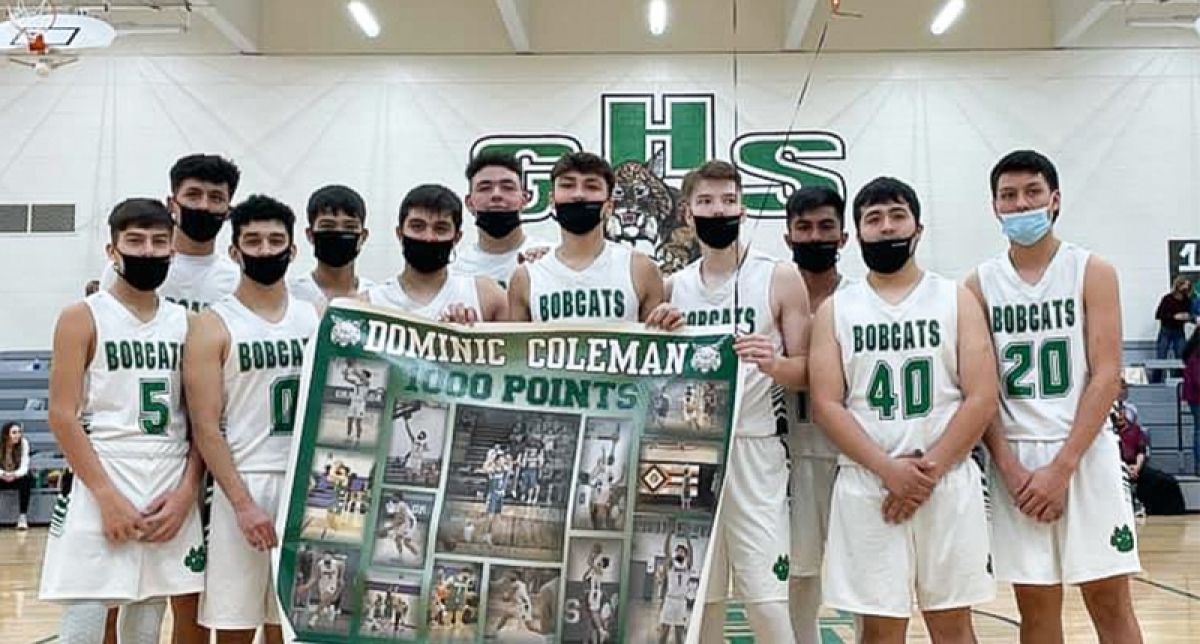 Cover: Granada junior Dominic Coleman is surrounded by his teammates after he reached a milestone in his career with his 1,000th point in a home game against Kim/Branson on Saturday, March 6. Congratulations Dominic!

An anticipated battle between the unbeaten and No. 3 state ranked Cheraw Wolverines and the No. 8 ranked Granada Bobcats for the Class 1A High Plains League boy’s championship took place on Friday night (March 5) in Granada.

When the final buzzer sounded, Granada had staged the upset with a shocking 48-31 victory. What made it shocking was the margin of victory.

Coleman turned in a double-double as he pumped in 19 points and went 6-for-7 at the free throw line. He carried the load under the boards with 15 rebounds (11 defensive).

Rink chipped in 12 points including four key baskets in the fourth quarter.

One of Granada’s key players John Hainer, a 6-3 sophomore post, spent most of the second half in foul trouble before he fouled out early in the fourth quarter. He averaged 11.2 points a game for the Bobcats.

The first half was close with Cheraw taking a 9-8 lead after the first quarter.

Granada went into the halftime break with a 17-15 lead. Coleman had 10 points in the first half.

In the second half, the Bobcats broke open the close game.

Granada outscored the Wolverines, 15-7, in the third quarter and 16-9 in the fourth quarter.

Yanez had four points in the quarter, while Coleman and Gonzales both had one trey apiece. Rink and Hainer had two points each.

In the fourth quarter, Rink responded with eight points while Coleman had six including a two-point field goal and going 4-of-5 at the free throw line.

Granada first-year coach Traegon Marquez said it was a heart pumping contest and he was pleased was the composure his team displayed.

“The game was close until the second half,” said Marquez. “John (Hainer) was in foul trouble and maybe played six minutes tops in the second half. He fouled out early in the fourth quarter with seven minutes left.”

“Jon (Rink) made some crucial buckets in the fourth when Cheraw pressed,” added Marquez. “Our guards did a great job of handling the ball. Another key was at the free throw line where we made 9-of-11 for 82 percent.”

“Our boys played well as a team and I’m proud of them,” praised Marquez.

Granada was back on their homecourt against the Kim/Branson Mustangs on Saturday, March 6 in the regular season finale.

The Bobcats posted a 60-49 victory to extend their winning streak to nine consecutive games.

The highlight of the game saw Coleman accomplish a milestone in his career as he scored his 1,000th point.

The game was a shootout as Kim/Branson connected on nine three-pointers and Granada had five.

Coleman pumped in 21 points including two 3’s and 5-of-6 at the free throw line.

Yanez capped the scoring with 5 points.

Granada jumped out to a 15-0 lead after the first quarter behind eight points from Hainer.

Kim/Branson outscored the Bobcats, 15-12, in the second quarter to trail 27-15 at the half. Coleman had 10 points in the quarter.

The Mustangs rallied in the third quarter to score 24 points compared to 13 for Granada and trail by just one point, 40-39. Doherty had 12 points for the Mustangs on four 3’s. Hainer had 6 points for the Bobcats.

Granada put the fire out as the Bobcats outpointed the Mustangs, 20-10, over the final eight minutes.

Gonzales came through with 10 points as he drained two 3’s and went 4-for-5 at the free throw line.

Coleman scored on a pair of two-point field goals and went 5-of-6 at the charity stripe.

The Bobcats (currently ranked No. 4) now awaits the release of the Class 1A 24-team state tournament bracket.

THE McCLAVE CARDINALS capped the regular season with a pair of victories against South Baca (69-29) and Kit Carson (52-42) last week.

After going winless last season, the young Cardinals finished with a 2-4 record for fourth place in the High Plains League and ended with 7-7 overall record.

THE WILEY PANTHERS finished the regular season with a 54-45 non-league loss to the Springfield Longhorns on Friday, March 5.

The Panthers, under first-year head coach Samuel Clayborn, ended the season with a 1-5 record in the High Plains League and 3-11 overall.

The Class 1A boys state bracket was released on Monday, March 8.

No. 4 seed Granada receives a bye in the first round.

The Bobcats will host the winner between No. 13 Evangelical Christian and No. 20 Hi-Plains on Thursday, March 11 in Quadrant 2.

No. 5 seed Cheraw is on the opposite side of Granada. The Wolverines await the winner between #12 Sangre de Cristo and No. 21 seed Pikes Peak Christian.

Area teams also making the state bracket were No. 16 Eads who hosts No. 17 Denver Waldorf in the first round on Tuesday, March 9.

No. 15 Kim/Branson will host No. 18 Cheyenne Wells in the first round on Tuesday.