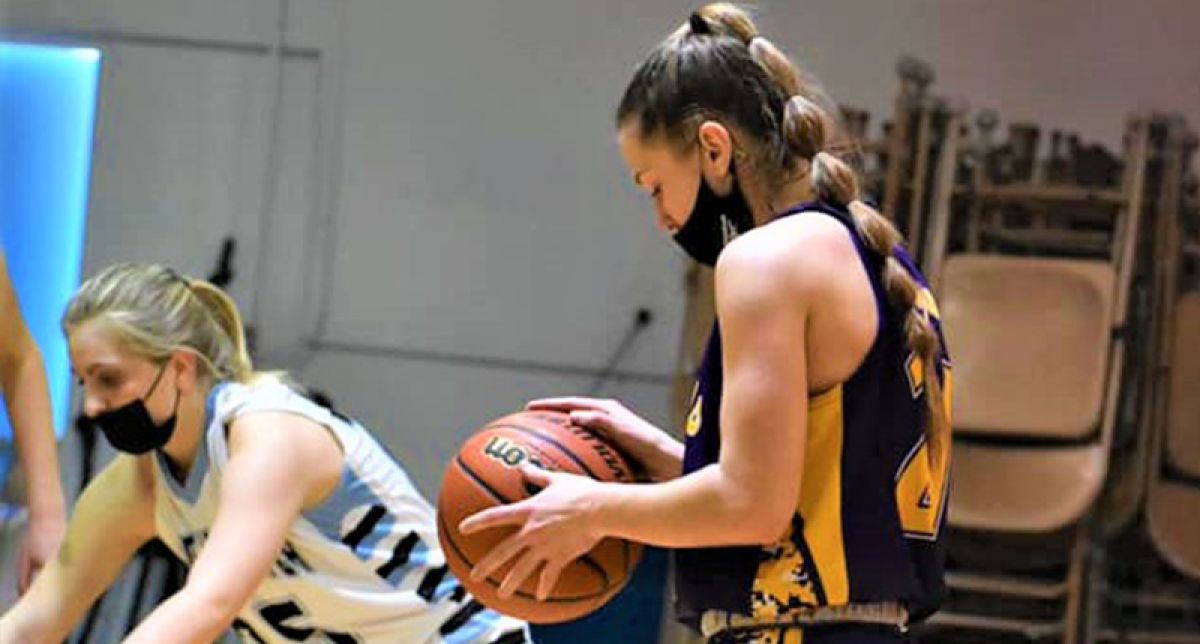 Cover: Ally Spady made a couple of crucial free throws down the stretch in the 39-37 thrilling upset victory over the South Baca Lady Patriots.

With .25 seconds left on the clock and the season on the line, the Eads girls found themselves tied, 37-37 and no time outs remaining, with powerhouse South Baca who at 12-1 was considered one of the best teams in the 1A ranks.  The Patriots triple teamed Eagle veteran point guard Ally Spady on the inbounds knowing Eads needed the ball in her capable hands.  Taking Spady out of the play left the game and season up to the Eads underclassmen who rose to the occasion in thrilling form.

Freshman Madison McDowell managed to receive the inbounds and brought the ball the length of the court moving it forward to sophomore Samantha Courkamp who drove the baseline and then made an incredible bounce pass to sophomore Maggie Haase who was standing in the middle of the lane.  Haase got the shot up and it went in with .05 seconds remaining.  The Lady Patriots gave one frantic, half-court attempt but the ball hit the side of the rim and bounced off giving the upstart Eagles a win they will always remember, 39-37.

According to head coach Trey Eder, “Everyone was ecstatic because we knew we had to have that seemingly impossible win to make the playoffs.  We’re just happy to get another game and get a chance to prove we’re a team that can be there in the end.  I’m very impressed and happy with the girls on how they performed in the last game of the year.  It was a must win situation and they rose to the occasion and got the win.”

Eder and the Eagles found out they did indeed make the playoffs because of the win over South Baca and will be seeded #20 in the post-season tournament that includes the 24 top-ranked teams in the state.  That #20 seed means Eads (8-5) travels to Merino on Tuesday to take on the #13 Rams who have a 9-5 record.  If they win that game, they then travel to #4 Flatirons Academy on Thursday.

Despite being the underdog in this week’s state playoff games, the Lady Eagles also have another problem.  They are without the services of a key starter in junior Rhaelie Rittgers who suffered a severe knee injury in the Cheraw game.  Eder said, “Thursday we went to Kim to play.  Rittgers was still hurt but we went ahead and suited her up.  She thought she could give it a go with her knee during warm-ups so we started her.  She played good for about a quarter but she went down again and so we sat her for the rest of game.  That was devastating for us because she does a lot for our team.  We need her out on the floor.”

Amazingly enough, Eads did not have Rittgers suited when they defeated South Baca.

The Kim game was a tough one for Eads on Thursday night as they played the Mustangs well for a quarter before giving up a 12-3 advantage after Rittgers went out.  By the end of the game Eads, simply put, gave up not scoring a single point in the fourth quarter while the Mustangs rattled off 18.  Eads lost in Kim, 46-12.

Eder did not mince words in his response to the second half in Kim, “The second half wasn’t good for us as we didn’t play particularly well.  It seemed our attitude and heart were pretty much out of it at that point.  I felt like we just didn’t battle once we got down.  I told the girls after the game that’s not who we are and that’s not what we do.  If we’re going to lose, we have to go down fighting.  I just felt we didn’t play well in any aspect of the game.  The shooting was terrible, defense wasn’t very good and offensively we struggled.”

Eder’s counsel on not giving up must have been taken to heart by the young Eagles as they came out in the South Baca contest playing near perfect defense which allowed the offense, particularly from Spady and Courkamp, to stay even with the Lady Patriots.

Eder describes their strategy, “We knew the big girl, Alissa Hebberd in the middle was going to be hard for us to contain and to stop because we just don’t have size.  We came up with a game plan.  We didn’t have Rittgers.  We started Maggie Haase to take Hebberd away as she is the main player who makes things go for South Baca.  We put Katie Johnson, a freshman, on her to start the game and then with the rotation of Crystal Watson and Sam Courkamp the three did an excellent job staying with her and limiting her to her lowest point total of the season thus far. Those girls did a great job with some double teams from Maggie as well.  Defensively we executed to perfection on our plan.”

The Eagles actually had the lead, 18-16, at the intermission but fell to a three-point deficit at the end of the third.  It would take an exciting fourth quarter comeback to get the win.

Spady led the way for Eads with 14 points, 4 assists and 2 steals while Courkamp hit for 11 key counters, including three long balls, and pulled down 7 rebounds.  McDowell had a strong game with 5 points, 7 rebounds, 3 assists and 2 steals.  Perhaps the key shot of the game came from senior Lexi Lopez who hit a three ball, her only bucket of the game, right when the Eagles needed it late in the fourth quarter.

The key in the victory was the defense that held Hebberd to 13 points, down from the nearly 18 she averages each night.

It’s a new season for the very young Eads Lady Eagles who have a decent 8-5 record and who are capable of upsetting some pretty darn good teams at any given time.  Who know what this week will bring for the girls, but whatever happens the fact they are playing in the state playoffs is a very big deal for the Lady Eagles’ program.