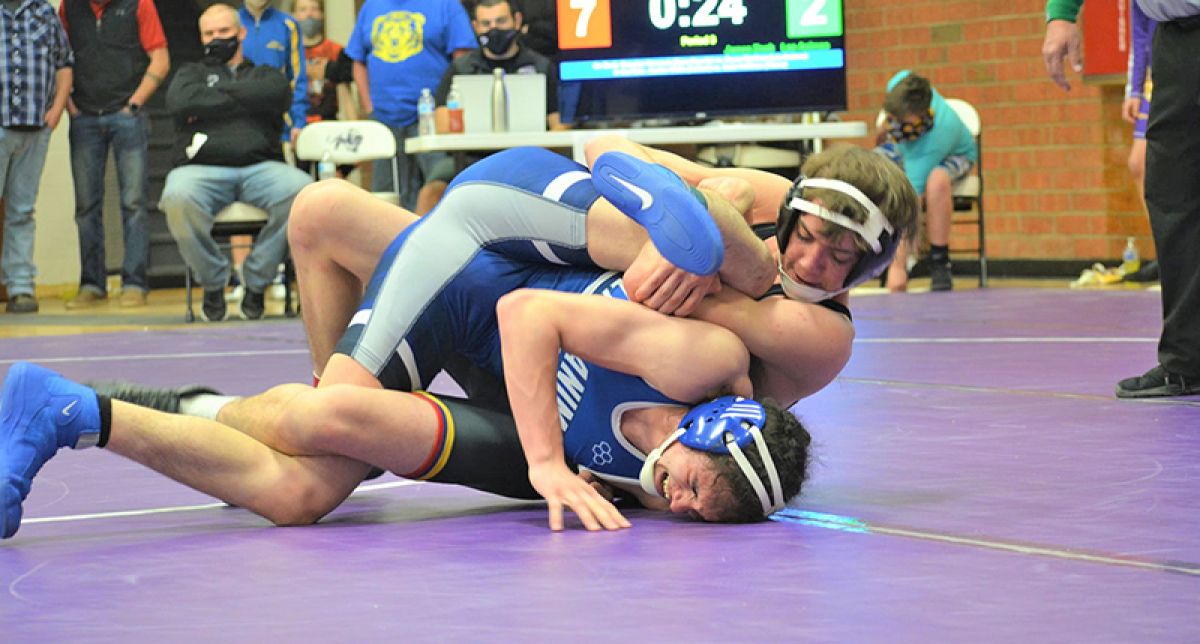 Cover: County Line senior Tate Krentz is pictured here in his semifinal match against James Zook of Las Animas. Krentz went on to win in a major decision, 12-4, advancing him to the Region 4 Championship in the 138-pound division where he placed runner-up but still qualified for state.

This year due to Covid-19, the top two wrestlers in each weight class instead of the usual four advanced to eight-man brackets for their respective state tournaments.

The Rivals had three seniors Tate Krentz at 138, senior Aiden Michael at 160, and senior Cade Zordel at 170 all place second to punch their tickets to state.

Krentz won his first three matches with two pins and a major decision in the semifinals to advance to the championship.

In the quarterfinals, he stuck Connor Clodfelter (8-12) of Swink in 57 seconds.

Krentz won by an 11-2 major decision over James Zook (12-4) of Las Animas in the semifinals. 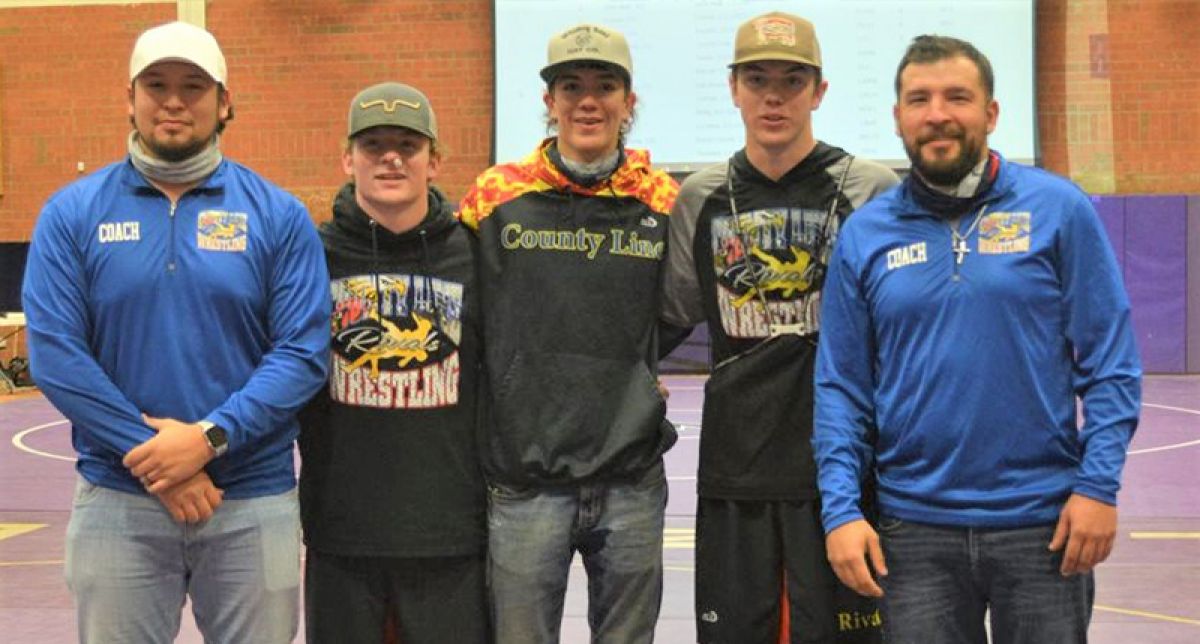 County Line seniors Cade Zordel, Tate Krentz, and Aiden Michael (left to right) all placed second in the Class 2A Region 4 Tournament to earn berths to the Class 2A Colorado State Wrestling Championships. The trio is pictured with first-year head coach Draven Adame (left) and his brother Darrian Adame.

At 160 pounds, Aiden Michael won his first two matches with an 11-4 decision over Elijah Evans (13-8) in the quarterfinals and pinned Tanner Natelli (15-6) of Ellicott in 2:44 in the semifinals.

At 170 pounds, Zordel registered pins in his first two matches.

He stuck Tanner Tomky (5-6) of Swink in 59 seconds in the quarterfinals.

Torres pinned Gabe Tapia (6-12) of Las Animas in 57 seconds in the quarterfinals.

In the semifinals, Torres was pinned in 48 seconds by No. 3 state-ranked Seth Moss (15-3) of Buena Vista.

Torres received a bye in the consolation semifinals.

In his third place match, Torres won by 17-8 major decision over Malaki Rael (9-9) of Swink.

Jones received a bye in the quarterfinals.

Jones bounced back with a pin in 41 seconds over Mick Howard (6-6) of Baca County) in the consolation semifinals.

Senior Zack Fowler at 145-pounds did not participate in the regional.

The Class 2A state tournament will take place at the Southwest Motors Events Center on Friday, March 12.  The tournament starts with the quarterfinals at 9 a.m. and followed with the semifinals, consolation first round, and consolation semifinals at 12:30.  The 2A Parade of Champions is set for 5 p.m. and followed by championship finals, third and fourth place matches and fifth and sixth place matches at 5:15.

December 01, 2021 | Betsy Barnett | Sports
The good news for the Eads Lady Eagles, eventually at least, is that Eads returns five key players to the basketball court this year—all who have h...
Tweet