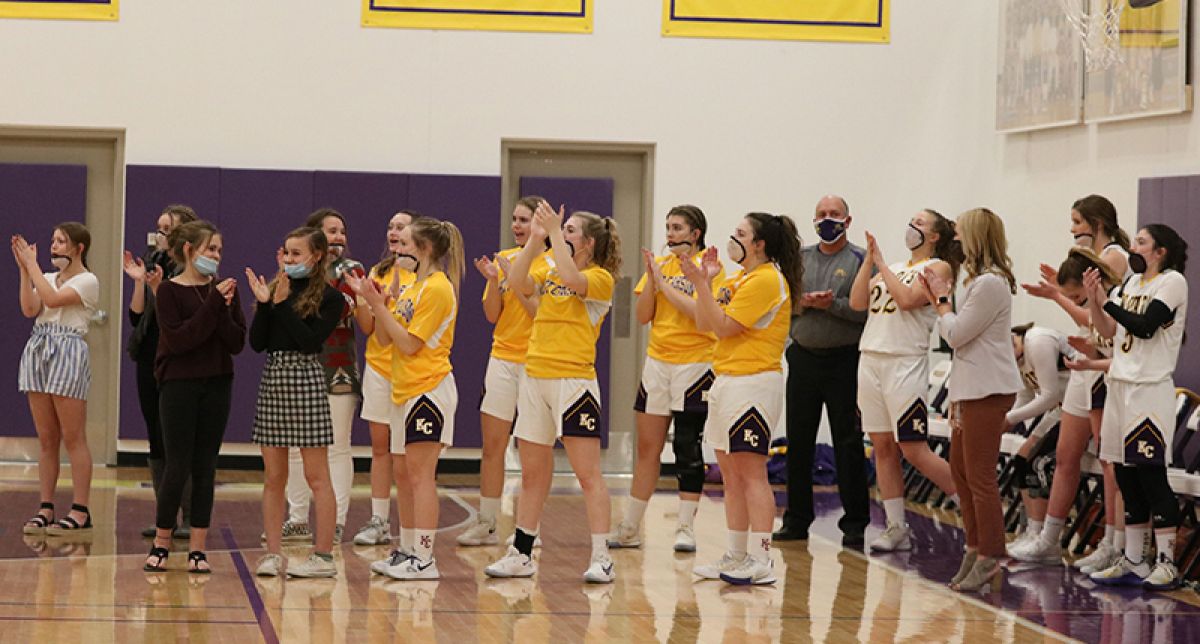 Kit Carson has enjoyed home court advantage throughout the 1A Girls' State Basketball Tournament so much so that they have won two games by slim margins in heart-stoppping fashion.

The Kit Carson Lady Wildcats continue to send their fans into cardiac arrest in their own home gym as the #2 seeded team has hosted two 1A Girls’ State Basketball Tournament games at home and won them both on the free throw line in come-from-behind fashion.

On Thursday in the Sweet 16 they hosted a feisty Lone Star (#15) group coming away with a 38-36 victory.  On Monday night in Kit Carson the Dove Creek Bulldogs, located 40 miles from the Utah border, traveled east across the entire state of Colorado to Kit Carson, located 40 miles from the Kansas border, in order to challenge the home team for the right to advance to the Final 4.

Kit Carson trailed the entire game until senior Cally Booker-Rady hit two consecutive free throws, her only two points of the night, to gain the Wildcats the lead, 40-38, with :57 left on the clock.

Booker-Rady had suffered a season-ending knee injury towards the end of her junior year in basketball and has gone through hundreds of hours of rehab and sitting on the bench cheering on her team early in the season.  But slowly the senior was able to make some headway as she arrived tonight at the free throw line for the biggest two free throws of her career.

Head Coach Sara Crawford described the Lone Star game, “Starting off the game with Lone Star with seven turnovers in the first quarter didn’t give us the momentum we wanted.  Lone Star had a couple of strong athletes and some very good role players who knew their jobs.  They really played great defense.  The second half was much better, as far as turning over the ball went, but we just couldn’t get the ball in the hoop during the third quarter.”

The third quarter was actually a nightmare for the Lady Cats as they only scored a single free throw in the entire 8 minutes.  Luckily, their defense held somewhat strong giving up 9 points.  The KC girls found themselves down, 27-21, with one quarter left in what could possibly mean the season.

Crawford continues, “Finally, in the fourth quarter, we had the momentum swing our way with a couple of buckets from Tieler Randel.  Then very late, it was Sedonia Isenbart who stepped to the line to hit two clutch free throws to put us up by two.  We were out of timeouts, so we had to rely on the leadership on the court to get organized and not allow the Longhorns to score in their last possession.  Having to pull out a close win like that was very good for our team.  We learned some valuable lessons we will take with us into the next game with Dove Creek.”

The freshman Isenbart led the team with 12 points, 9 rebounds and 6 steals.  The big girls in the middle including Stephanie Framel and Tess Johnson each had 8 points while Framel pulled down 8 boards and Johnson added 13 big rebounds.  The sparkplug Randel added 6 points from the arc.

The Dove Creek team is a very athletic group with good speed and some decent height.  They earned their ticket to the Elite 8 with a convincing win over McClave, 53-33, although that score does not tell the story of the series of misfortunes the Lady Cards suffered down the post season stretch.  They would first get out of rhythm with a Covid quarantine forcing them to play three important games in three days after no practice for a week.  In one of those games their top-scorer and play-maker Anna Beckett went down with a knee injury.  In the Dove Creek game, a second vital starter, Maggie Chase, was injured in the first quarter and could not return.

On Monday night in Kit Carson, it seemed like a rerun of the Lone Star game as Kit Carson could not find the basket and forced the ball too often resulting in a whopping 16 turnovers in the first half.  They trailed 15-8 after the first period, but then got down further in the second period being down at one point by as much as 12 points.  Framel made a crucial post bucket at the buzzer to the end the first half bringing the Cats to within ten points of the Lady Bulldogs, 21-11.

The third quarter became a pounding dual of who could get the momentum going as first the Wildcats made a six-point run getting within seven, 28-21 with 4:39 left.  But then Isenbart committed her fourth foul and was forced to grab some pine.  The Lady Bulldogs then went on a 6-point run of their own and by the end of the third quarter, Kit Carson had made absolutely no dent in their 10-point deficit.

The fourth quarter saw Isenbart back on the floor and the freshman made the difference right away as she was fouled making the bucket and then drilled the free throw making the score, 31-24.  Tess Johnson’s size had been bothering the Bulldogs all night.  Johnson began to come alive at the post and would be fouled shooting.  She made both her free throws with 5:00 minutes remaining inching the Cats ever closer but still trailing, 31-26.

Senior Faye Buttry then nailed a three-pointer igniting the crowd and gaining ground on the deficit, 33-29.

At the 4:16 mark Isenbart came alive hitting a jumper and then two free throws bringing her team to withing a single bucket, 35-33.  But with the Cats putting the pressure on the Dogs Isenbart got a little too exuberant and committed her fifth foul on the sideline.  To add insult to injury, the foul put Kylee Gatlin on the line where she managed to make one of two, getting the Dogs a three-point lead 36-33.

Johnson battled back in the paint where the Dogs did not have an answer to her size hitting for a bucket and putting the pressure on trailing, 36-35 with 2:50 left.

Finally----finally---with 2:15 showing on the clock the feisty Buttry hit her third three-ball of the game and grabbed the Cats their first lead of the contest, 38-36.

Dove Creek battled back and after getting three offensive boards finally scored with 1:38 to go on a Gatlin bucket.

Kit Carson could not convert on their next possession and had to rely on their defense to save the season---which it did---when Johnson grabbed the biggest board of the night giving her team the ball back with 1:10 left.  The Cats moved the ball around looking for a final shot.  They had three bigs in the line-up, Framel, Johnson and Booker-Rady, obviously hoping to get an inside bucket.  They went for Booker-Rady who was fouled inside and given those two crucial free throws that gained KC their final lead of the night, 40-38.

It was then left to the defense to hold off the Dog Pack and they finally did with Framel clearing the boards with six seconds left.

Johnson led the Cats with 11 points while Isenbart and Buttry each had nine points.  Framel, playing hurt in the final minutes of the contest, was key inside scoring 8 points.  But it would be those 2 crucial points given to the Cats by Booker-Rady that made the difference.

The Cats will remain at home and host the Final 4 round of the state tournament against Fleming (#6) who also had to come from behind to win their Elite 8 game against #3 Sangre de Cristo, 41-34.  The Final 4 game in Kit Carson will be held on Thursday, March 18.