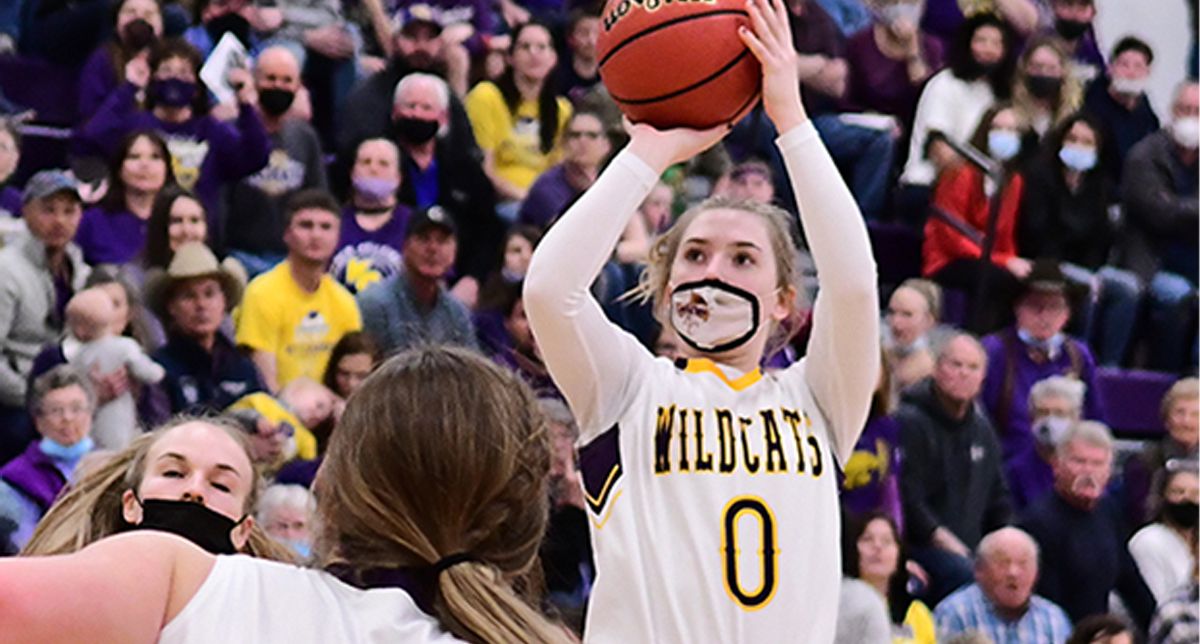 Fleming Defeats Kit Carson in the 1A State Final Four Round

Kit Carson’s hopes of another state championship in basketball went by the wayside on Thursday as the Lady Wildcats suffered through a miserable fourth quarter against the Wildcats from Fleming.  Holding a 39-34 lead going into the final quarter, Kit Carson had no answer for Fleming’s 9-0 early run that got them the lead and the eventual win, 55-48.
The loss ended Kit Carson’s perfect 2021 campaign at a 15-1 season record.  Fleming (12-4) went on to play Flatirons Academy in the 1A Colorado State Championship losing in a physically played game, 64-52.
Fleming’s physicality and their full court pressure defense finally wore down the Kit Carson bunch at the end of both halves of play.  Kit Carson jumped out to a strong 12-6 lead after the first period.  However, in a flurry of back-and-forth basketball the Wildcats from the north overcame the deficit scoring 21 points in the second period alone and gaining the 27-21 lead at the intermission.
Coming out of the gates to start the third quarter freshman Sedonia Isenbart hit a jumper sending a message that the Kit Carson group was not ready to give up the game just yet.  The two teams battled with exceptional defense and the Kit Carson group rebounded board-for-board with the good size from Fleming.
Kit Carson slowly moved into target-range on a Tieler Randel three-ball at the 5:05 mark making the score 31-28 with the Lady Cats still trailing.  The senior then came down and hit a duplicate long ball knotting the score at 31 apiece at the 3:55 mark of the third.  In a flurry of three balls, Isenbart then added a triple and junior Faye Buttry added a fourth bomb making the score 37-33 with the Lady Cats in the lead.  Buttry added a steal and a layup late in the quarter to extend Kit Carson’s lead to 39-34 at the end of three stanzas.
Crawford described the fourth quarter as “A grind.  We struggled to get anything to go down.”
Fleming’s Whitney Chintala and Kendyll Kirkwood became the dynamic duo for the Fleming team as the junior and senior respectively came alive leading their team to a 9-0 initial run before Kit Carson ever got near the basket.  With senior Tieler Randel on the bench in foul trouble, Crawford tried to find a combination of bigs and guards that could hold off the Fleming onslaught.
Fleming took the lead for good at the 4:20 mark when Kirkwood was fouled and went to the line making both free throws and getting the lead, 41-39.  The charity line was a huge reason that Fleming came through in the end as they went 12-for-18 in the final quarter alone.  Kit Carson hardly saw the free throw line only shooting 3-for-5 on the entire night.  Fleming was 19-for-29 in the game.
Finally, at the 3:04 mark, Isenbart broke the drought hitting one of two free throws and helping the KC contention to stay in the game still trailing, 43-40.
But then the wheels fell off for Kit Carson as the Fleming crew, Chintala, in particular, used their skill and size to stall the ball for the final minutes of the game.  Kit Carson was forced to foul to stop the clock allowing Fleming to add insult onto their lead, 47-40.
Stephanie Framel came through with a late jumper to get the score within reach once more, 47-42, but then a foul to Kirkwood extended the Fleming lead again.
Faye Buttry hit one three ball down the stretch to make a statement for her KC Cats with just under .20 remaining.  But they could never get closer than 53-48.  Fleming made the rest of their free throws in the final seconds.
Kirkwood, the senior, led all scorers with 17 points and pulled a double-double with 13 rebounds.  She also added 4 steals.  Chintala followed with 16 points, including two long balls, 7 rebounds, and 4 assists.  The younger Kirkwood sister, Kally, a sophomore, added 8 points to the Fleming tally.
Fleming was only called for 9 personal fouls in the entire game.
Framel led the Kit Carson bunch with 9 points and 7 rebounds.  Isenbart had an exceptional game for the freshman scoring 8 points, pulling down 7 rebounds, and contributing 2 steals and 3 assists to the cause.  Faith Johnson added 7 points, Buttry 6 points, Tieler Randel had 6 points, Tess Johnson added 6 points and 9 rebounds, while Allison Gekeler added 3 assists.
Randel and Framel both fouled out as the KC Cats committed 21 personal fouls.
The Kit Carson Wildcats will lose five solid seniors who will graduate off the team in May.  They include Tieler Randel (6.3 ppg, 1.4 rpg), Faith Johnson (3.5 ppg/2.3 rpg), Allison Gekeler (3.9 ppg/2.1 rpg), Cally Booker-Rady (3.8 ppg/2.9 rpg) and Jordyn Weeks (.6 ppg/.7 rpg).  This was the group who played in the shadow of the three-time state champions and were there twice as freshmen and sophomores.
Head Coach Sara Crawford knows the loss of these five seniors will be a blow to the Cat team, “I am so grateful for the leadership of our senior players!  No matter what, they kept the team moving forward.”
Crawford ended her comments by stating, “At the beginning of the season, we set the normal goal:  earning a state championship.  Well, we didn’t reach our goal, but I still consider this season to be one of the most successful in our history.  The lessons learned, memories made, triumphs celebrated, and even heart aches felt are all part of what will keep this season in our hearts for a long time.”
She then adds one more thought, “As always, it’s a great day to be a Wildcat!”