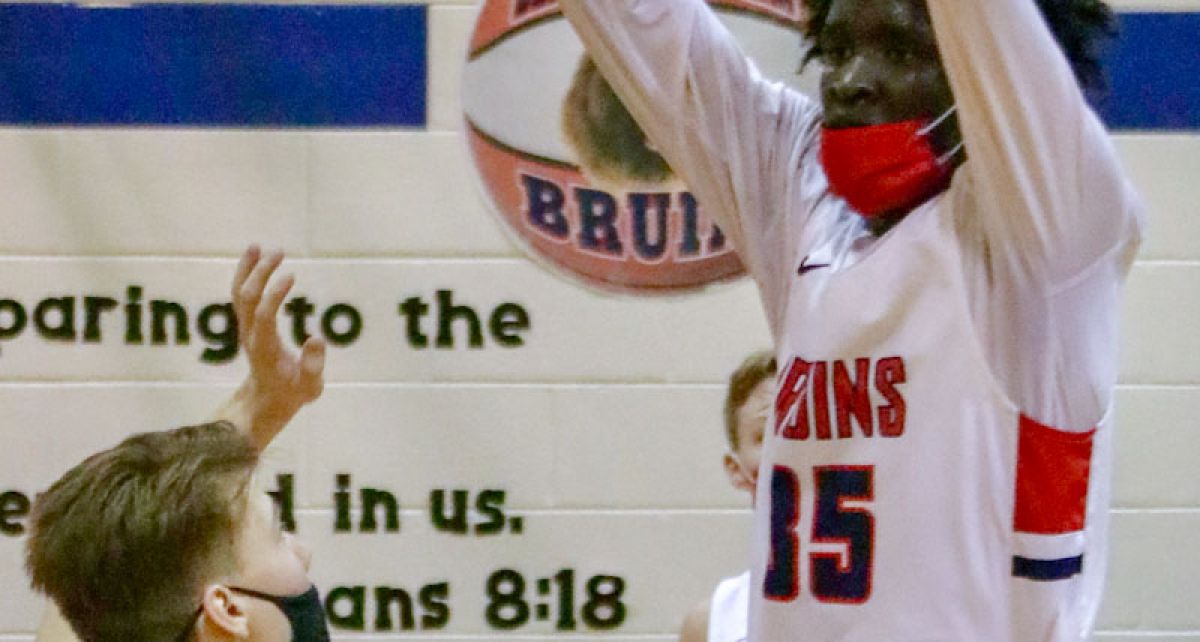 The 2021 high school basketball season came to a close as a total of 10 state champions (five girls and five boys) were crowned on Saturday and Sunday, March 20-21 at the Broadmoor World Arena in Colorado Springs.
In the Class 1A boy’s state championship, the No. 1 seed Belleview Christian Bruins claimed the championship with a convincing 69-35 victory over the No. 3 seed De Beque Dragons on Sunday.
Belleview Christian (16-0) allowed De Beque (16-2) to score just seven points in the entire first half.
The Bruins' 34-point win is the biggest margin of victory in a 1A championship game as pointed out by Kevin Shaffer of ColoradoPreps.com. The previous was 31 points when Kim beat Ridgway 61-30 in 1996. It was Belleview Christian that ended a state playoff run for a young Granada Bobcats basketball team.
In the Final Four of the state tournament, No. 4 seed Granada fell to the Bruins, 58-46, on Thursday, March 18 in Denver.
Granada gave the Bruins all they could handle especially in the first half.
The game was tied 14-14 after the first quarter before the Bobcats outscored the Bruins, 17-10, in the second quarter to grab a 31-24 lead at the half.
In the first half, Dominic Coleman and Brandon Gonzales combined for 27 of the 31 points for the Bobcats.
Coleman had 8 points in the first quarter and Gonzales had 6 points on two 3’s.
In the Bobcats’ 17-point second quarter, Gonzales led the way with 9 points on three 3’s. John Hainer scored 4 points (his only points of the game).
The momentum shifted in favor of Belleview Christian in the second half.
The Bruins tightened the clamps on defense to hold Granada to just a total of 15 points in the second half.
Coleman had 9 points (three 3’s) in the second half to finish with a game-high 21 points. Gonzales had one three-pointer in the fourth quarter to finish with 18 points.
Ivan Yanez had three points in the game with a trey in the fourth quarter.
Belleview came out to outscore the Bobcats, 22-6, in the third quarter to grab a 46-37 lead.
In the third, Granada was leading 34-29 with five minutes showing when Belleview Christian put together an 11-0 run to take a 40-34 lead with 2:28 left.
Granada scored on a three-pointer to make it 40-37 with 1:30 left in the third before the Bruins closed with 6-0 run for a 46-37 lead.
Senior Logan Owen had 8 points in the third quarter for the Bruins followed by Assane Diop and John Croak with 5 each and Drew Hunter with 4.
In the fourth quarter, Belleview Christian outscored Granada, 12-9, to cap the game’s scoring.
Owen finished with 17 points for the Bruins. Diop had 14 and Hunter had 10.
Granada drained 10 3’s in the game and shot only 3-of-4 free throws.
The season-ending loss for Granada broke an 11-game winning streak for the Bobcats.
Granada capped a fantastic season with a 15-2 record under first-year head coach Traegon Marquez.
Rink. Earlier in the week, Granada hosted No. 5 seed Cheraw in a Great 8 showdow on Monday, March 15 in Granada.
Granada and Cheraw were facing each other for the second time this season.
In the first meeting, Granada defeated the Wolverines, 48-31, for the High Plains League title on March 5.
The rematch was a lot closer as Granada rallied and held on for a 42-40 victory.
Granada dug themselves in a hole and trailed Cheraw, 15-0. The Wolverines held a 18-6 lead after the first quarter.
The Bobcats chipped away and cut the deficit to 23-21 at the half.
Granada opened the quarter to score nine unanswered points to cut the deficit to 18-15 with 3:50 showing.
The 9-0 run was ignited by a three-pointer and a two-point basket by Coleman. Hainer followed with a bucket inside with an assist by Coleman. A reverse layup on a drive down the baseline by Rink capped the run.
Cheraw scored to make it 20-15 with 3:20 left before Coleman drained another trey to bring the score to 20-18.
A three-pointer by the Wolverines gave them a 23-18 lead with under two minutes showing in the quarter.
A free throw by Coleman and a layup by Guevara closed the scoring with Cheraw leading by just two points, 23-21, at halftime.
The Bobcats came out in the second half to outscore the Wolverines, 13-11, in the third and 8-6 in the fourth to earn the victory.
In the third quarter, Coleman failed to score but Hainer responded to scored 6 points. Guevara and Gonzales both had a three-pointer and Rink a free throw.
The two teams went back-and-forth in the quarter.
The score was knotted three times before the quarter ended in a 34-34 deadlock.
At the start of the quarter, Granada grabbed its first lead of the game (24-23) after Gonzales hit a three-pointer for his only points of the game.
From that point, the game turned into a see-saw battle.
Cheraw was leading 31-28 before Granada countered with a three-pointer by Guevara to tie at 31-31 with 2:27 left in the quarter.
A free throw by Rink regained the lead for the Bobcats (32-31) before a three-pointer put the Wolverines back on top 34-32 with 1:08 on the clock.
Hainer scored to bring the score to 34-34 going into the fourth quarter.
The fourth quarter was lowing scoring affair as Granada managed just enough with 8 points compared to 6 for Cheraw.
Neither team got on the scoreboard until under five minutes showing when a three-point play by Coleman gave his team a 37-34 lead with 4:46 showing on the scoreboard.
That proved to be a lead that Granada never relinquished down the stretch.
A three-point play by the Wolverines got them to within 41-40 with two minutes to go.
With 1:12 left, Hainer went to the line and made the second of two free throws for a 42-40 lead.
Granada missed a scoring opportunity at the free throw line with nine seconds left as Cheraw rebounded the ball and called time out.
With one last chance to tie or win the game, the Wolverines put the ball in play but could not get a shot off as time expired.
Coleman finished with 17 points and followed by Hainer with 14, Guevara 5, and Gonzales and Rink with 3 each.