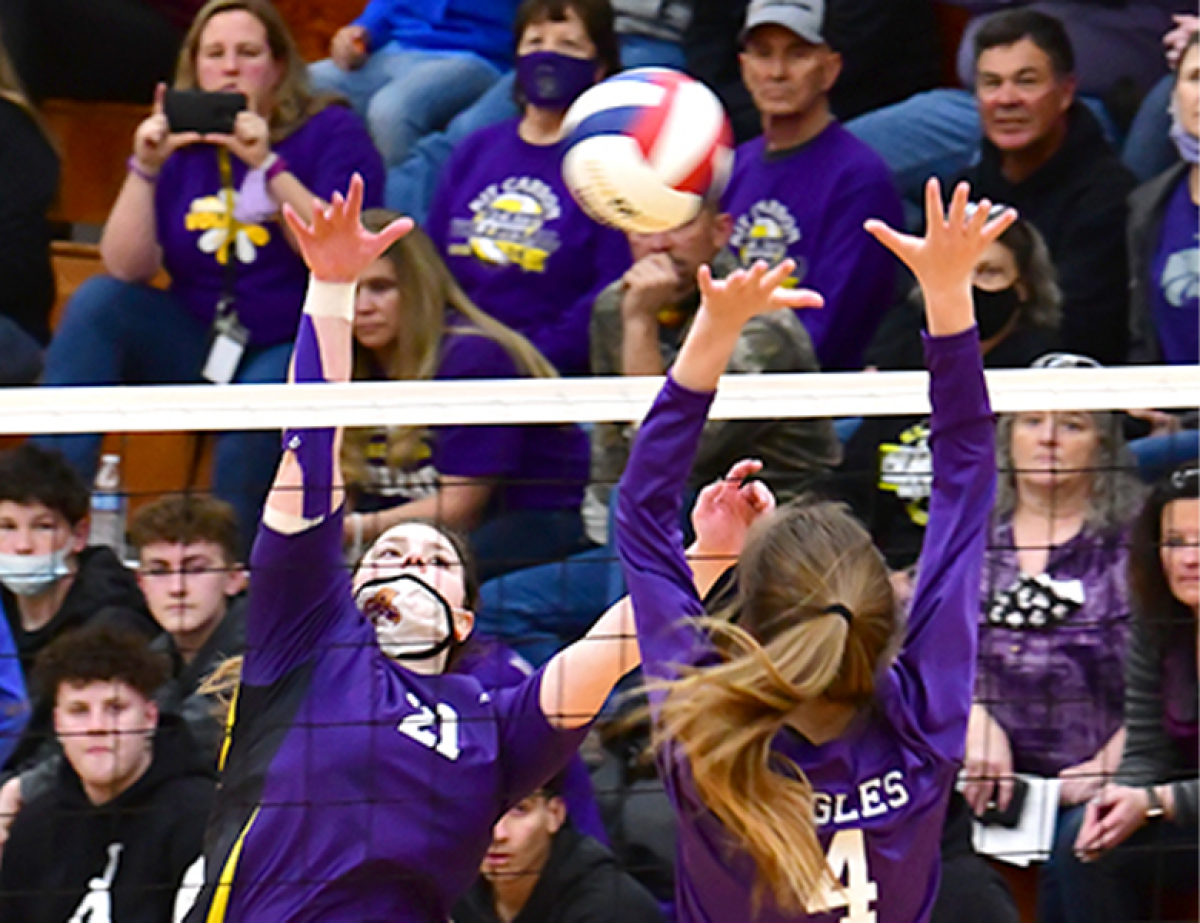 The Eads Volleyball team is coached by veterans Chelsea Davis and Ty Lin Williams.  These coaches know that it will take some time for the Lady Eagles, just 10 strong, to figure out their roles and how to play with each other.  They are very young and are stepping into varsity positions that require not only skill but the ability to play the ball quickly and efficiently.  “It’s going to take some time,” stated Davis.
Eads lost three key players to graduation a year ago and then lost two of the only returning starters when the season began.  Davis knows it’s going to be an uphill battle to develop the youngsters, “It was a devastating loss when Rhaelie Rittgers suffered a severe knee injury and then we had a few girls decide not to play at the last minute.”
Over the first week of play the Lady Eagles dropped both matches on the schedule including a 3-0 opener at Stratton in game scores of 8-25, 15-25 and 15-25.  They then showed the Eagle fans a little bit of what they are capable of in their home opener against Kit Carson losing 3-1 but gaining a win in game #2.  The scores against Kit Carson were 15-25, 25-22, 15-25, and 22-25.
Davis said she was impressed with the scrappy Stratton-Liberty team who is now 3-0 coming out of the gates.  “They were very scrappy and hard-hitting.  They reminded us we really need to move our feet and transition much more efficiently to defense.”
But Davis realizes they only had a few days of practice and that most of the girls on the team have played very little varsity-level volleyball.  “It’s a much faster game than they are used to,” reasoned Davis.
In the Stratton/Liberty contest Eads hit a 35.4% kill percentage as a team with sophomore Maggie Haase putting down 11 attacks successfully and senior Colby Stoker adding 6 more kills.  Sophomore Samantha Courkamp, having very little experience as the setter on the team, managed to give her hitters 17 assists on the night.
Sophomore Brianna Habinck had a strong first game as a varsity player getting an ace serve, 6 assists and 18 digs to her name.  Courkamp added 16 digs, while freshman Katie Johnson had 12 digs and junior Kyra Sheridan added 9 more digs.
Eads had a better outing against Kit Carson in the Eagle home opener as they challenged the strong Lady Wildcat team in Game 2 coming away with a 25-22 win.  Stoker tied the game at 6-6 with a kill and Eads took the lead for the first time off an ace serve from Johnson.  Kit Carson then made a couple of unforced errors, but senior Mollie Kelley and Sheridan each pushed for points gaining Eads a 13-9 lead and forcing KC’s first time out.  Sheridan sent a strong message with an impressive ace serve making the score 17-11.
But the Cats’ experience kept them in the game as they slowly chipped away at the Eads tenuous lead.  They would get to within 18-16 off a Cally Booker-Rady kill.  However, the Cats continued to suffer through errors and Eads battled to maintain their lead keeping the pressure on Kit Carson.
After Game 2 it was all Kit Carson as their experience and superior size got the better of the undermatched Eagles.
For Kit Carson the attack came from three players including Booker-Rady with 9 kills, Tess Johnson with 8 kills and Stephanie Framel who added 6 more kills.  Tieler Randel added 4 service aces while Johnson added 2 aces.  Framel had 6 blocks while Booker-Rady contributed two.  Defensively, Randel had 34 digs, while Booker-Rady had 13 digs, Jordyn Weeks added 11 digs and Allison Gekeler chipped in 8 digs.  Gekeler and freshman Sedonia Isenbart led the charge with 19 and 5 assists respectively.
For Eads it was Haase again who led the Eagle attack with 13 kills and 6 blocks.  Stoker had 7 kills and 3 blocks to her credit.  Haase added 2 ace serves while Kelley had 3 ace serves.  Courkamp ran the show giving out 22 assists.  Defensively, Eads was led by Habinck with 24 digs followed by Kelley who brought up 16 balls, Crystal Watson with 9 digs and Courkamp added 8 more.
The youngsters from Eads won’t get much of a chance to practice as they are on the road Tuesday against Cheyenne Wells (0-1) and again on Friday to take on Flagler (1-1).  They then host a rare Saturday contest with Genoa/Hugo/Karval (0-1) the day before Easter.  Finally, on Monday, April 5 they will welcome Granada (0-1) for a league contest.
Kit Carson game:  We’re still trying to figure out a solid 6 that mesh together to accomplish our goal.  We won the second set against KC, but not necessarily the way we should’ve.  We are still working out the kinks of only practicing 2 weeks.  If we can do all the little things right and the girls play to their potential, this will be a very exciting season!