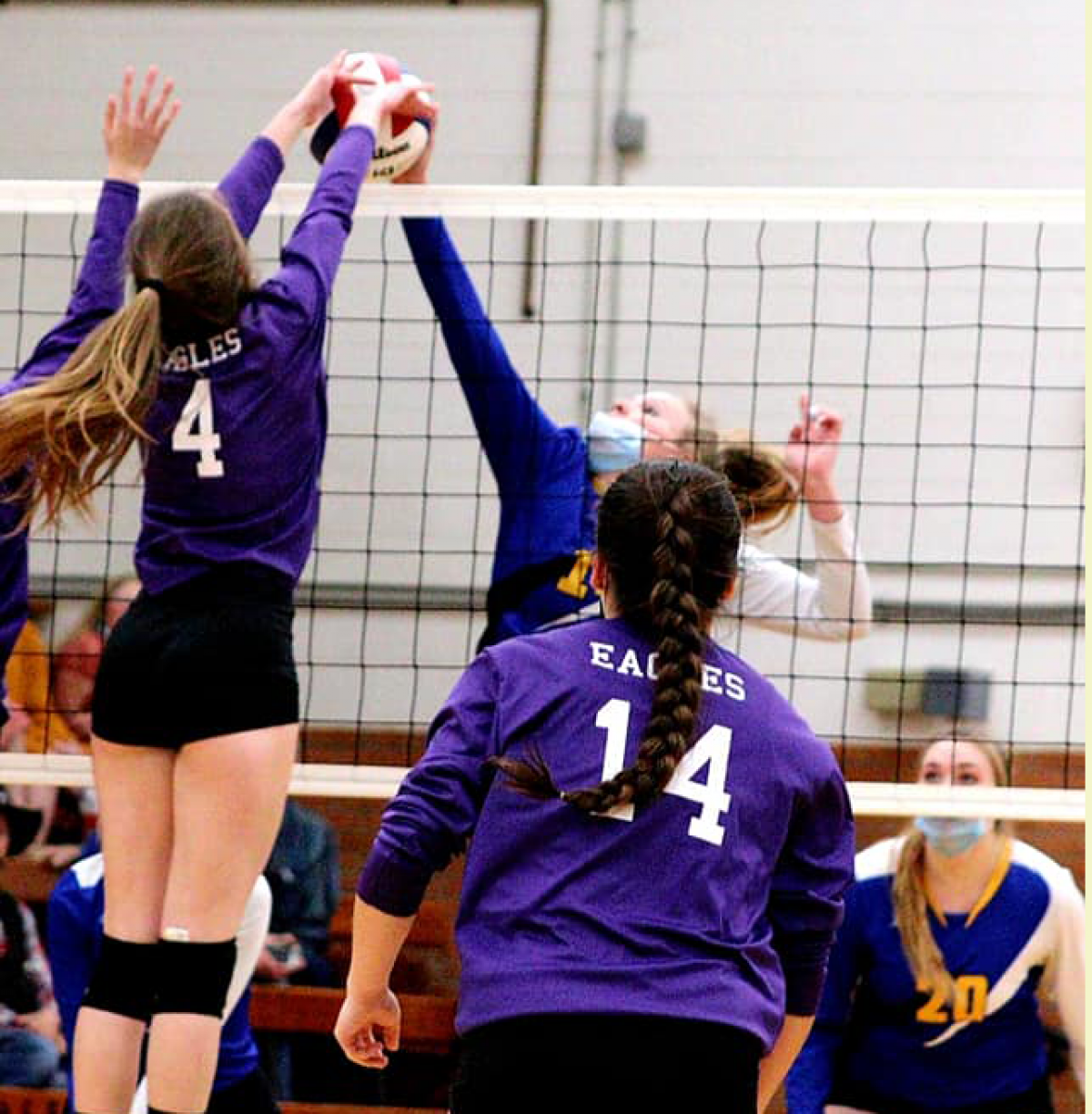 Maggie Haase (#4) wins a dual at the net against Glorya Carr on Saturday in Eads.

The last week of volleyball was a tumultuous time for the Eads Eagles’ (5-1) players and coaches alike as they continued to look for a win on the volleyball season despite the fact we are at the midway point of the season.
The Eads girls lost 3 matches over the past week including a 3-0 set to Cheyenne Wells on Tuesday, March 30; another 3-0 loss to Flagler on April 1; and yet another 3-0 loss to Genoa-Hugo on Saturday, April 2.  The Lady Eagles then hosted Granada in a must-win conference matchup on Monday coming away with their first win of the season, 3-1.
Head Coach Chelsea Davis has had to deal with a number of obstacles in the season.  First, they lost their starting setter.  Over the past week, they tried to bring last year’s all-conference player, junior Rhaelie Rittgers back into the line up after a late-season basketball knee injury had sidelined her, as well.  Rittgers was a valuable outside hitter and setter for Eads a year ago.
But Rittgers’ knee was still not stable enough to effectively play such a demanding sport as volleyball.
Davis stated, “Rittgers played at Cheyenne Wells and we were hopeful that she would be able to continue as long as she was braced up and feeling good.  However, her surgeon informed her that she has a slight tear on her meniscus in addition to her ACL, so surgery has been scheduled and she won’t be able to continue on with the season.”
Because they were trying to bring Rittgers back into the lineup, the rest of the Eads players have been adjusting with different rotations and expectations.  Now, with a definite diagnosis on losing a second starter, it is time to settle on the rotation and assignments and get the players moving forward.
The Cheyenne Wells game was the first conference contest the Lady Eagles had in the High Plains League.  They would lose in scores of 22-25, 15-25 and 15-25.  It was a long bus ride home for Eads.
Eads was still on the road by Friday when they traveled to the Flagler gym.  Flagler has a 3-1 record and  a strong tradition of volleyball to go along with it.  Unfortunately, the Eads girls lost big in Flagler by scores of 16-25, 7-25, and 15-25.
The Lady Eagles were still battling on Saturday when they hosted the experienced Genoa-Hugo-Karval team who currently have a 2-2 season record.  Again, the Lady Eagles struggled with the strong attack from junior Glorya Carr and senior Brylee Miller.  They are also led offensively by senior Tessa Smith who has been the quarterback of the team for most of her preps career.  Eads lost on Saturday in games of 15-25, 12-25 and 14-25.
No stats for Eads were available for any of their contests this week.
Finally, the much-anticipated game with Granada was played on a rare Monday.  Granada came to town with a 1-3 record overall.  The Lady Eagles were ready to go after their first win.  According to Davis, “With a new rotation we were hoping to get the conference win over Granada.”
The Eads girls came out strong taking advantage of numerous Granada errors in Game #1.  Sophomore Maggie Haase came alive when she rotated to the front line bringing home three consecutive kills to grab a 25-10 win.
But Game #2 saw Eads get behind and Granada moving the ball much better.  The Bobcats found hole after hole in the middle of Eads’ defense.  The Lady Eagles tried to come back into the game but too many errors caused them to lose the second game, 19-25.
Game #3 was all Eads as they came out swinging behind some excellent sets by sophomore Sam Courkamp who had numerous assists and three kills midway through the game.  Senior Mollie Kelley put the pressure on the Bobcats with an ace serve making the score 23-11.  The next two points for Eads came with Bobcat errors with Eads winning 25-12.
In the fourth game for Eads, they got behind initially as much as 9-18 midway through the contest.  With Katie Johnson serving Eads made a slight run gaining 5 straight points and forcing Granada to call a time out.  The two teams bantered back and forth, but late in the contest Eads again slipped back falling behind 15-21 behind a number of miscues.  Eads then called a time out and got reset for the final push.  When the Eagles rotated both Haase and Kyra Sheridan to the front row the duo went to work creating a lot of problems for the Bobcats.  Sheridan had perhaps her finest game of the season thus far as she owned four consecutive kills that surpassed the Bobcats’ lead and grabbed the win.
A trio of players for Granada caused Eads havoc through the contest including junior Katie Baca, freshman Mariah Sigala and junior Shania Sigala.  Granada just committed too many errors to win the contest, but when they were on, they looked very good.
For Eads Haase and Sheridan were a force on the net.  Haase had 8 kills and 6 blocks while Sheridan led Eads with 9 kills.  Courkamp had perhaps her finest performance as the quarterback.  Key to the success was the hustle play in the back row from Johnson and Habinck who eventually closed up the big gap in the middle of the Eads defense.
This win was a key conference W for Eads.  They needed to put a mark in the win column and succeeded on a rare Monday night contest.
Eads now faces off with one of the toughest teams in the league in the 7-0 McClave Cardinals who will come to town on Friday.