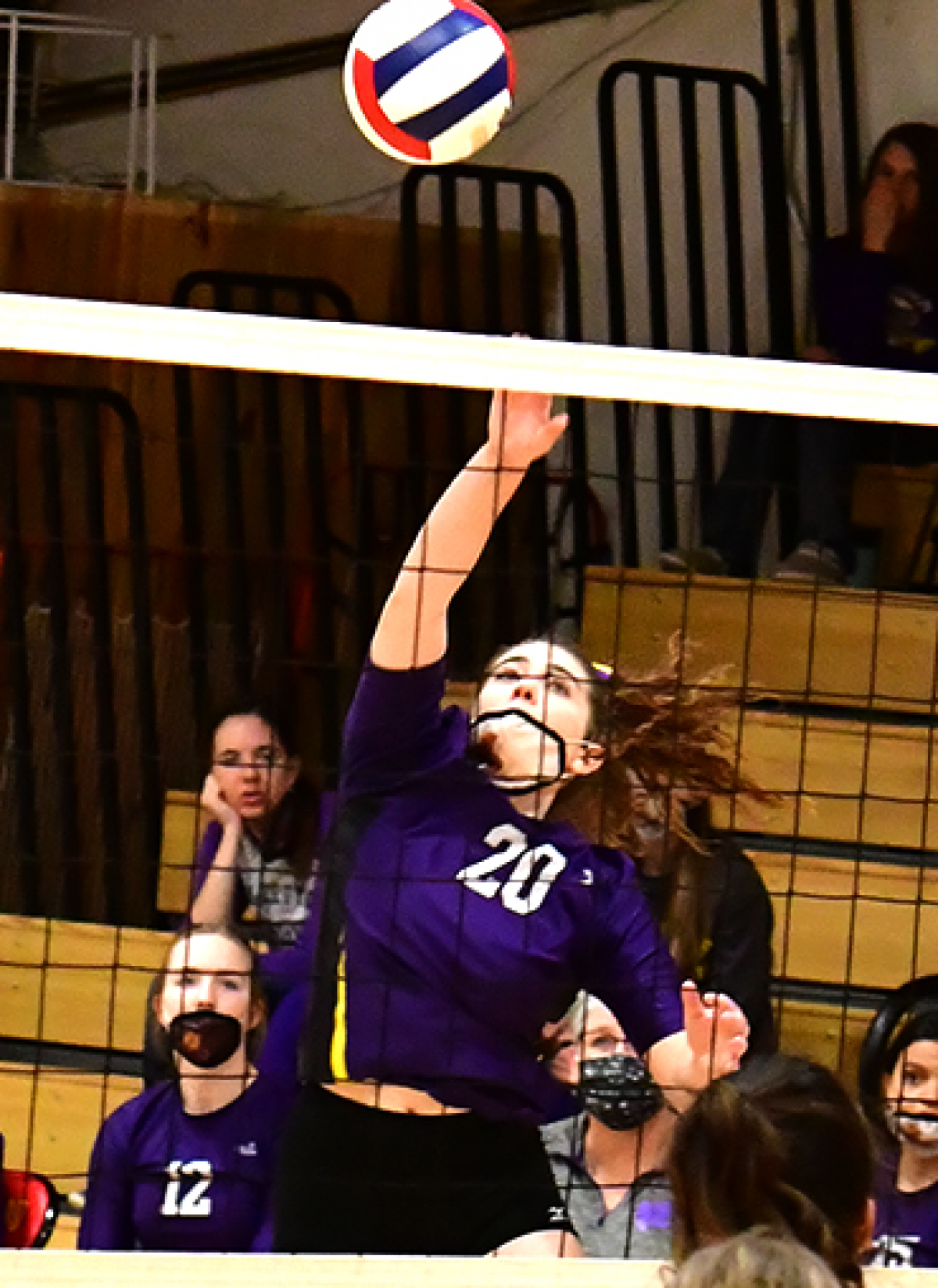 Kit Carson Lady WIldcat Brooker-Rady (20) gets a hit at the net against Rocky Ford in the match played Thursday, April 1st in the Melon Dome in Rocky Ford.

Over the past week the Kit Carson Wildcats were busy with improving their overall performance on the volleyball court as they grabbed a key conference win of Cheraw (2-2/0-2), 3-0, but then finally dropped an intensely fought match at 2A Rocky Ford (4-1/2-0), 3-2, falling flat in the fifth and deciding game.
Things don’t get any easier for the Cats who will need to put together a strong week of volleyball to emerge on the other end with a record worthy of looking at by the seeding committees choosing the final state tournament recipients.  Kit Carson will begin the week against a very tough McClave group (7-0/2-0) in a showdown that will more than likely determine the High-Plains League championship.  They then travel to Idalia (3-1/2-1) on Thursday to take on a solid Lady Wolves team.  By Friday they are back on the Wildcat home turf for a battle with Cheyenne County neighbors from the east the Cheyenne Wells Lady Tigers (1-3/1-0) who are struggling a bit but who gained a key conference win over Eads. Finally, the Lady Cats will host Granada (1-3/0-1) for another conference match.
The Lady Cats are 3-3 on the season but Coach Penny Isenbart is happy with the way her team is progressing as they move into the mid-season period.  On Monday she said, “We did a lot of growing last week.  We had some great moments that proved that our tenacity’s paying off.”
The conference win over Cheraw sent a strong message to the HPL in general that Kit Carson is a tough team to play.  They controlled the athletic Lady Wolverines in three straight contests in scores of 25-16, 25-15, and 25-19.  The Cats proved to have too many weapons both on defense and offense for the Wolverines to gain any advantage.
Sophomore Tess Johnson led the way for the Cats with 11 kills in the short contest hitting at a blazing 42.3% success rate.  Johnson also added 2 blocks to her season tally.
Fellow classmate Kenzie Waggoner added 7 kills (30.4%) and defensively pulled up 10 digs.  Senior Cally Booker-Rady added 4 kills (23.4%).  Junior Stephanie Framel trolled the net for 2 successful blocks.
Freshman Sedonia Isenbart had 3 ace serves and 7 assists.  Tieler Randel, a senior, is the defensive libero and as such saved 32 balls while contributing 2 ace service points.  Senior Jordyn Weeks added two more ace serves in the Cheraw win.
Kit Carson dropped the Rocky Ford contest but played a darn fine game going the distance.  They would win the first game 25-14 but then the Lady Meloneers woke up and started attacking.  The Meloneers would grab a convincing 14-25 win over the cruising Cats in Game 2 but had all they could handle in game 3 when the Kit Carson crew woke up and knew they were in for a battle.  Game 3 was a barnburner but the Meloneers finally put it away, 26-24.  Kit Carson grabbed the fourth game, 25-14, knowing they had to win to stay alive.  That set up a fifth game --- more than Kit Carson had ever played this season--- and the score shows they struggled with that fact.  Whether they lost their focus or were tired, or perhaps nervous, the Lady Cats played too cautious and learned that never works losing 15-4 in the deciding game.
Lesson learned.
As a team the Cats had 36 kills but suffered through a 19.9% hitting percentage.  They also had 7 aces and an amazing 113 digs in the team stat book.  For their part, the Lady Meloneers added 29 kills and also suffered with accuracy issues only hitting at 19%.  However, a key part of the win for Rocky Ford was from the service line where they accumulated an impressive 14 ace serves.
Booker-Rady led the Cats with 8 kills and had a strong 32% accuracy on her attacks.  Framel had 7 kills (21.2%), while senior Faith Johnson added 5 kills (21.7%) and Waggoner also had 5 kills (15.6%).  Tess Johnson added 5 kills, as well.
Isenbart had 2 ace serves, as did Tieler Randel.  The senior libero added an impressive 52 digs in the five-game match. Torrie Randel, a sophomore, added 10 more digs.  Senior Allison Gekeler found her setters 20 times for assists and also brought the ball up 16 times.
The McClave game on Tuesday pitted two of the best teams in the conference.  McClave entered the contest with recent wins over Granada (3-0), Walsh (3-2), Cheraw (3-2) and Holly (3-0).