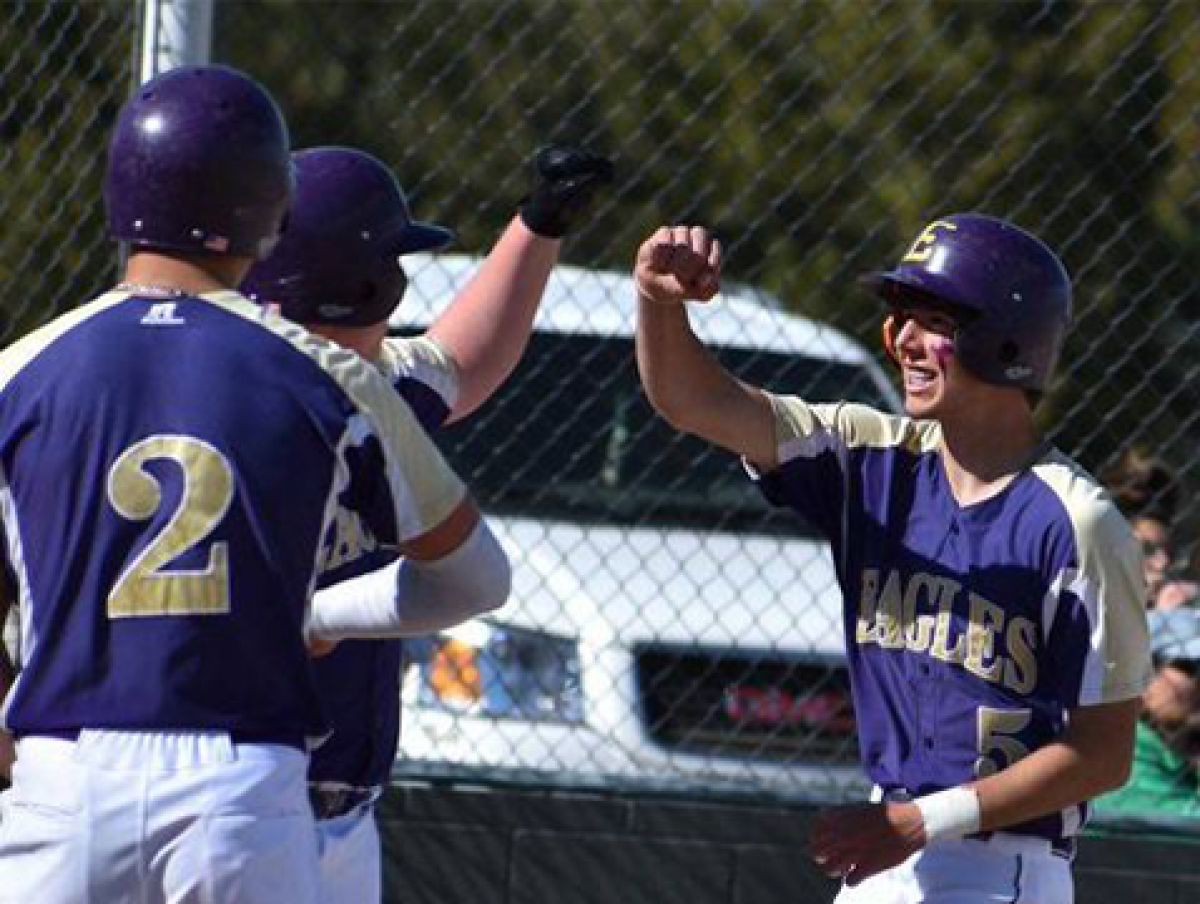 The Eads Eagles, like all the baseball teams in Colorado, had not been on the diamond for two years.  Coming back into a shortened season where every game counts in a big way if you want to qualify for the playoffs, the Eagles were faced with a very tall order to start off their season.  That was a trip over to Granada where they had two varsity games against the pre-season favorites.   But the Eagles have matured and put together an unexpected performance at the plate and on the mound to grab an exciting 5-2 comeback win in the first game and added a nightcap victory, 16-8, over the favored Bobcats.

Eads went on to defeat the County Line Rivals, a combination of Wiley and McClave ball players, on Saturday during a blustery home opener, 10-4.  Eads now finds themselves in the driver’s seat of the large High Plains conference with a 3-0 record.

First year head coach Marcus Gilmore, who himself was a notable baseball player for Eads and at Otero Junior College, was happy with the way his team came out of the gates, “We had a good first week with three wins.  It felt like we had been practicing for a long time with no games, so it was really good to finally get the season started.  We did some good things on both nights.  We ran the bags well, we fielded the ball decent, we had some good at-bats and we pitched good enough to win.  We didn’t have a ton of hits in the three games but having good at-bats I can live with.”

Granada had scored a run in the first and another in the second in the season opener for both teams.  That would be it until Eads finally came alive to grab a 5-2 comeback win in their last at-bat.  AJ Vasquez started the run as he drew a walk with one out.  Brandon Lening then struck out leaving Vasquez aboard with two outs on the field.  Hatch Nelson then popped up a high reaching ball towards second base with no play on it and Vasquez, with heads up base running, was already at second base.  With two aboard and two outs, Zach Fowler doubled to center field scoring both Vasquez and Nelson tying the ball game at 2 apiece.  Cade McDowell then singled to center field scoring Fowler.  Freshman Porter Spady next came to the plate with two outs and McDowell on first and singled to center field moving McDowell to second.  Keenan Smith then electrified the crowd with a double to center field that scored both McDowell and Spady.

Brandon Lening earned the victory on the pitcher’s mound for the Eagles.  The senior righty went four innings, allowed two runs on six hits and struck out eight.  Nelson came in relief and threw one inning out of the bullpen for the save.

Nelson had two hits in his three at bats for Eads.

Granada had six hits with Dominic Coleman, Brian Gonzales and Jose Sanchez all having effective at bats.  Coleman was the losing pitcher as the junior went 4.2 innings giving up 2 hits, 2 runs, 4 walks, but had and dominating 14 strike outs.

Gilmore was very pleased with how his team came together, “A comeback win in our last at-bat to take down Granada who was ranked number one was a great way to start the season.  We were down by two going into it and we put up five to gain the lead.  Brandon threw a good game for us with no earned runs but the last inning we brought in Hatch and he closed it out for us.  It definitely was a team effort to get that first win.”

In the nightcap with Granada the game was tied at seven with Eads batting in the top of the fourth inning.  Damien Barnes tripled with the bases loaded scoring all three.  Eads got the win despite allowing Granada to score five runs in the second inning.  The offensive fire power for the Bobcats was led by Gonzales, Lupe Martinez, Coleman and Oryan Hainer.

After scoring two runs in the first three innings and four in the fourth, the Eagles racked up 6 runs in the top of the fifth inning.  The offensive threat in that inning came from Nelson, Fowler, Barnes and Joe Haase, all who drove in runs.

Fowler was the winning pitcher going three and two-thirds innings, allowing seven runs on nine hits and striking out three.  Nelson threw one and one-third innings in relief and would record the last four outs to earn the save for Eads.

Eads scattered 15 hits around the Bobcat field coming from Nelson, Haase, Fowler, Vasquez and Barnes all who managed multiple hits.  Fowler, Haase and Nelson each collected three hits apiece.  Fowler led Eads with five stolen bases as the Eagles stole 18 bases in all.

Hainer was the losing pitcher going 3 innings and giving up 8 hits, 10 earned runs, walked 3, and struck out 5.  Gonzales and Coleman put in a little work out of the bullpen.

The Eagles would score 7 runs in the bottom of the first inning in their home opener against the County Line Rivals on Saturday.  With a harsh wind blowing directly to left field, the Rivals’ pitching struggled early.  Hatch Nelson ignited the crowd when he hit a towering triple with bases loaded.  Fowler again was a beast on the base pads stealing four.

Lening was credited with the victory as he went six innings and only allowed two runs on six hits.  The senior was in command of his pitches as he struck out eight and walked one.

Eads faces Manzanola at home for a varsity double header on Tuesday and then will have a major challenge when Cheyenne Wells, who is 3-0 as well, comes to town on Friday.