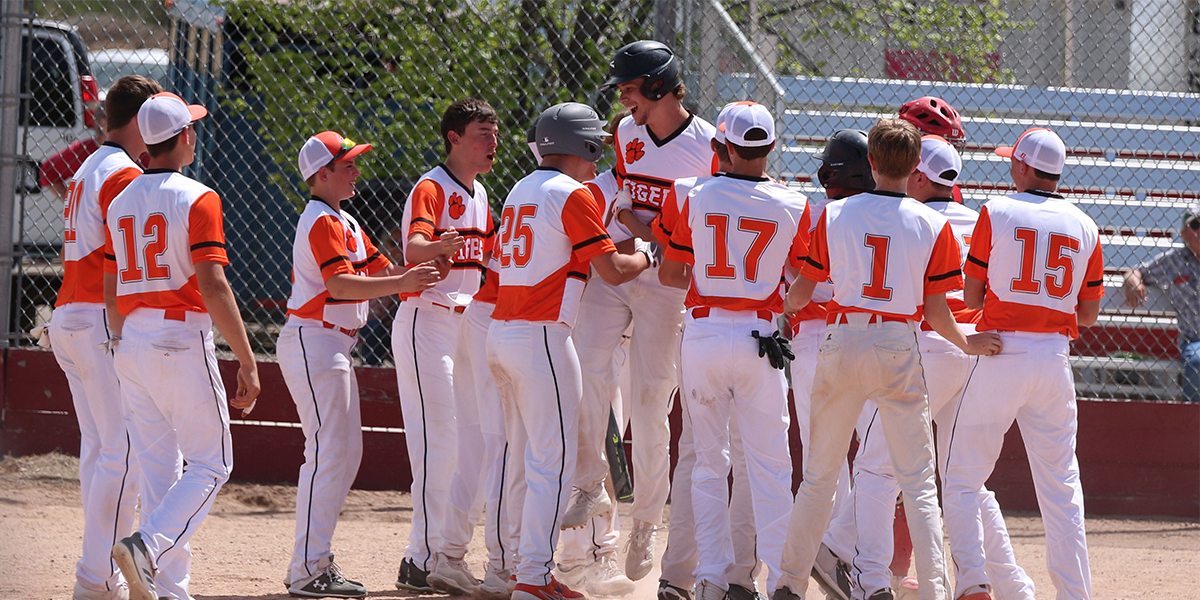 CHEYENNE WELLS TIGERS BASEBALL HAS SUCCESSFUL FIRST WEEK: Takes Wins Over Stratton/Liberty at Home and Manzanola on the Road

The Cheyenne Wells Tigers got a wonderful normal feeling of being back on the baseball field this week after the devastating news of their 2020 season being canceled due to Covid. Seventeen players rostered this year for the team with 14 being from Cheyenne Wells and 3 more joining from Kit Carson. The team has 7 returning juniors between both schools and added 1 more junior and 9 rookie sophomores and freshmen to the group. Myles Smith returns as the head coach for the Tigers.

The team took the home field on the beautiful Tuesday, May 4th afternoon by hosting the Stratton-Liberty Knighted Eagles and having a strong showing on the mound from sophomore Ty Scheler taking the win, 12-6. The sophomore and his team started off great in the 1st inning with 3-up-and-3-down with returning junior Brett Mayhan behind the plate. The Tigers got things rolling scoring on a stolen base by returning junior Evan Worley and later earned their second run of the afternoon by Mayhan on an RBI single from Paul Mitchek. The second inning was again an excellent inning for the Tigers only facing 4 batters registering 1 walk and 2 strike outs from Scheler and a nice play on a hard hit ground ball by sophomore Blake Gilmore.

Cooper Seaman toed the rubber for Stratton-Liberty allowing 1 walk, two balls in play, and 2 strikeouts with a ground out from shortstop Camden Bledsoe ending the inning with zero scored. The pitcher went two and a third innings, allowing five runs on five hits and striking out five.

The Tigers came back and notched six runs in the third inning with Brock Ziegler, Cade Mitchek and  Worley who all moved runners across the plate notching a number of RBI’s. Righthander, Scheler, allowed three hits and three runs over four and a third innings and striking out eight total batters, to lead the afternoon in stats.

Bex Seaman and Bledsoe entered the game from the bullpen, throwing two innings and one and two-thirds respectively for the Knighted Eagles.

The Tigers totaled 13 hits with Ziegler, Kody Ryser, Scheler, and Worley each racking up multiple hits for the Tigers.  Ryser and Ziegler each collected 3 hits to lead the team in scoring.

On Friday, May 7th, the Tigers traveled comfortably on the road to Manzanola to take on the Bobcats. The Tigers’ two pitchers, Scheler and Ryser, didn’t allow a single hit as they defeated the Bobcats, 26-0.

The returning junior, Ryser, struck out Bobcat Colton Bierman to get the last out of the very hot afternoon ending the first of two games.

Ty Scheler had an excellent game and led his team to victory by driving in six runs. Scheler went 3-for-3 at the plate and drove in runs using two singles in the first, a walk in the second and another single in the third. Scheler also had an outstanding time on the mound as he led things off for the Tigers. The righthander allowed zero hits and zero runs over the first two innings, striking out three and walking none.

Manzanola’s Blake Williams took the mound for the Bobcats. The pitcher struggled with the Tigers’ strong bats allowing 8 hits and 12 runs over the first inning. Dakota Sims came in as relief out of the bullpen in the 2nd inning for the Bobcats.

The Tigers collected 15 hits on the day.  Scheler, Mitchek, Mayhan, Paul Mitchek, and Evan Worley all collected multiple hits for the Tigers. Scheler led in hits going 3-for-3 at the plate. The Tigers had a nice afternoon of stolen bases to total 9.

Game Two of the afternoon with the Bobcats and the Tigers had a little more excitement with the highlight of the game being a homerun from junior Cade Mitchek deep into the grandstands in the fourth inning. To start the game junior Brett Mayhan took the mound for the Tigers as Blake Gilmore was geared up as catcher. The Tigers started out strong with an infield play to third baseman Alex Mitchek for the first out and only allowed one run scored. Outfielder freshman Carson Noe caught a nice pop-fly to end the inning.

The Tigers grabbed an early lead on their way to a 15-7 win.  Worley scored on a triple and Scheler on a double in the first inning. Pitcher Mayhan and the team had a quick 3-up-3-down in the second with 2 strike outs and a line out to Worley in center field. The Tigers scored 4 more runs in the third with Scheler and Worley both contributing a single and Mayhan hitting a triple bringing home Scheler and Alex Mitchek. Paul Mitchek showed his strong arm on the mound as he came in the third inning against the Bobcats. With the help of his teammates, they ended the inning with a pop-out to left fielder Cade Mitchek and a strike out.

The Tiger collected 11 hits and Manzanola had 5 in this high scoring game. Worley led the team in hits by going 3-for-3 at the plate.

Coach Myles Smith says, “It feels really good to have the opportunity to get back out on the diamond after being away for almost two years. We are definitely a little bit rusty, as expected, but we were able to get 3 conference wins. This being a shortened season and every game being more important it was a great start to our season. This week we are looking to clean some things up that we struggled with in week one and continue to get better as the season continues.”