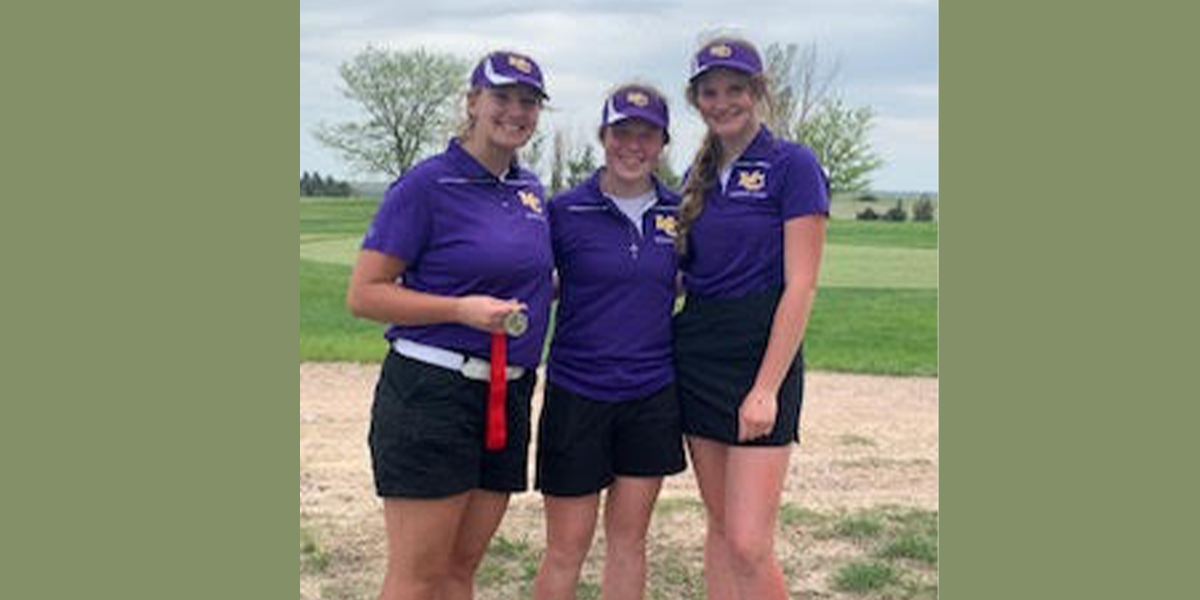 Kit Carson has formed their first girls' golf team this season and it consists of three golfers including, Stephanie Framel, Sedonia Isenbart and Tess Johnson. Framel and Johnson golfed with Cheyenne Wells last year. This is Isenbart's first season.

Last spring Kit Carson’s Stephanie Framel and Tess Johnson traveled to Cheyenne Wells joining the Tiger’s girls’ golf team.  This year Cheyenne Wells dropped their program so Kit Carson scrambled to establish their own first-ever girls’ golf team.  Framel and Johnson came out, of course, and also convinced the athletic Sedonia Isenbart, who had hardly ever golfed before, to join their team.

They were only missing a coach but came up with an ingenious idea to hire the Eads boys’ golf coach, Justin McLoud, who has been at the helm of the Eads links off-and-on for a number of years.  Since the boys play in the fall, this kind of cooperation has worked perfectly for all involved.  The Kit Carson team travels to the Eads Golf Course where McLoud meets them for their daily practices.

McLoud is enjoying his new role stating, “I want to start off by saying thank you to the Kit Carson R1 School District for giving me the opportunity to coach these girls and try to expand the game of golf in our area.  They have been working hard in practice and it's starting to show up at tournaments.  We know what we need to go back and work on in practice now.  After we get those parts ironed out, we should start to see their scores drop.”

Kit Carson’s first meet was the Fowler Invitational on May 18 at the Cottonwood Links Golf Course in Fowler.  There were nine teams competing, all much larger schools than Kit Carson, including La Junta, Fowler, Rye, Swink, Centennial, Pueblo County, Pueblo West and Swallows Academy.

Rye would win the Fowler Tournament with Swink coming in 2nd and La Junta grabbed third place as a team.  Swink’s Kinzie Ensor has been impressive thus far in the season grabbing the individual championship by shooting an 89 on the day.  Rye’s Morgan Voss came in second place with a 96, and Framel grabbed the third-place honors shooting an even 100.  Johnson did not attend this tournament, but Isenbart came in 18th with a 131 on the course.

The team then traveled to the Wray Invitational on May 21st to golf at the beautiful Wray Country Club.  Six teams, including Kit Carson, competed including Wray, Washington County (Otis and Akron), Yuma, Holyoke and Brush.

McLoud knows there isn’t much time for practicing in order to work on the many facets of the game of golf.  “We have a busy week next week. On Tuesday we’re at Burlington, Wednesday at Hollydot, and Friday (May 28th) we will be hosting the first annual Wildcat Invitational here in Eads.”