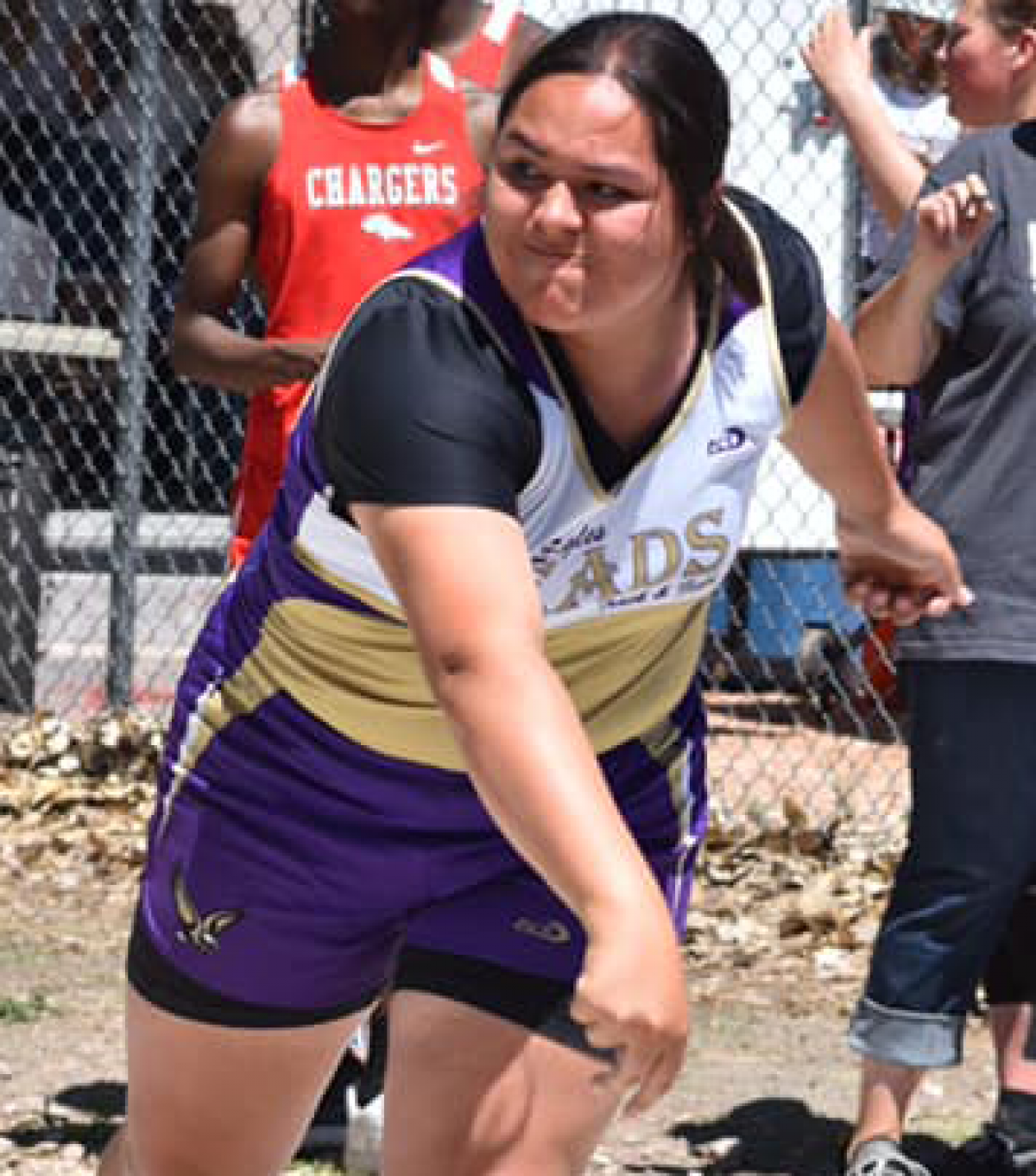 The Eads High School Track & Field teams continued to improve their performances in Elbert last week competing in welcomed warm conditions and at an altitude they will need to get used to as they make plans to compete in the 1A Colorado Track & Field Finals in Denver.

Eads has 7 girls and 5 boys who are sitting in the top rankings at the state level.

The Eads girls are extremely tough to beat in the field events as between three athletes including Colby Stoker, Kyra Sheridan and Maggie Haase that have been tough to beat.

Stoker is currently seeded 1st in the state in the Shot Put and 4th in the Discus. Eads continues to dominate the throwing ring with Sheridan seeded in third place, currently.

Haase leads the state in the High Jump and the Triple Jump.  She also continues to get better with each meet in her new events including the 100 Meter Hurdles and 300 Meter Hurdles.  After the Elbert meet where she had a great outing, Haase is seeded 5th in the 100s and 11th in the 300s.

According to Bohlander, “Maggie is so graceful and fun to watch in all her events.”

The girls’ team also has a dynamic foursome including Katie Johnson, Crystal Watson, Samantha Courkamp and Briana Habinck who took up the call for more team points this year and filled a 4x800 Meter Relay team.  Although this is not their natural race, all four have placed through the meets and is now seeded 9th.

The major part of the boys’ success has come in the relays where Damien Barnes, Porter Spady, Hatch Nelson and Joe Haase hold down the top spot in the 4x100 Meter Relay, they are seeded second in the 4x200 Meter Relay and seeded 5th in the 4x400 Meter Relay where Brenden Reifschneider replaces Barnes.

Senior Brad Musgrave could mean the difference in the Eads boys getting enough extra points to perhaps go after a strong placing at the state meet.  Musgrave is currently seeded just out of the money with a 9-seed in the Shot Put and is seeded 10th in the Discus.  If he could hit some strong throws in the next few weeks, it will help elevate the Eads boys’ team in a huge way.

The Eads teams traveled to Elbert to a meet hosted by Kiowa.  The facility and day turned out beautiful and the times and distances for Eads showed big improvements.  Head Coach Stephanie Bohlander stated, “Saturday was a big day for us...we needed to make some big moves in the rankings and just perform at our best for confidence too.  We did just that.”

Senior Colby Stoker had a huge day in the ring throwing her best against the top four throwers in the state.  She nailed down a championship in the Shot Put winning it with a 38’ 11” best performance.  She would place third in the Discus with a 109’ best effort.

Of Stoker’s performance, Bohlander was excited, “She threw her best in the Shot Put against the top four in the state right now, and she went and got it!  It was fun to watch her work.  She threw well in Discus too but is just still in the process of training right now.  By state, she'll be ready to go for it for sure.”

Stoker was joined by Sheridan in the ring who placed in fifth place in the Shot Put with a best throw of 34’ 2”.

Bohlander, again, is impressed with Haase, “she just needed to work some technique and bang some things out in her HJ and she did that!  She jumped her best and really took control  She ran a heck of a 100 hurdle race and worked her way into the middle of the pack in rankings.”

For the boys it would be Musgrave working in the ring.  He had come off some soreness in his shoulder placing fourth in the Shot Put with a best throw of 38’ 3” and third in the Discus with a 108’ 3” best effort.

Besides Musgrave, the rest of the boys’ team dual sport in Baseball.  Bohlander explained how hard that is to do --- especially in this odd year of COVID changes where they are still competing with school being out and the seniors already graduated, “The boys knew with only 2 meets left for sure due to baseball playoffs, they needed to take the track back and make some moves in the 4x2 and 4x4 and they sure ran well.  Their schedules (dual sporting) aren't slowing down, but rather getting fuller and busier, and these kids just buck up and go for it!  They bettered both times and really looked good.  We have a few more moves and changes to make this next week in these relays, but overall, I was proud of them.”

Porter Spady, Barnes, Hatch Nelson and Haase ran the three relays in Elbert.  Reifscheider usually replaces Barnes in the 4x400 M Relay but he was in the middle of the 3200 Meter race at that time.

Barnes and Haase represented well in the pit, although neither PR’d in Elbert.  Barnes placed 6th in the Long Jump with a best jump of 18’ 9” and Haase grabbed third in the Triiple Jump with a leap of 39’ 2.25”.

Bohlander said, “Of course, they weren't happy, but the process is working and we continue to do little things better each time we compete.  They too are graceful and really powerful on the runway; makes it fun to be at the pits.”

The Eagle Track & Field teams are turning up the heat as they inch towards the state meet in Denver in two short weeks.

Bohlander thinks they’ll be ready, “Overall, we are really turning the corner in our season; we are making gains, making the changes in form/technique we need to at this point, and are diligent in training.  We knew this season would be one of a kind going into the end of June, and it sure is.  Summer jobs, pulling double duty in both sports, summer heat, summer break, all of those factors take a toll on a kid; but I've said it for years, we truly have the best kids anywhere!  They continue to amaze me with their resiliency, determination and grit.  We are really nose to the grindstone right now, and it is paying off, which is what you hope for.  Two weeks to go until the big show, and I just have a good feeling for our athletes.  It’s great to be an Eagle.”