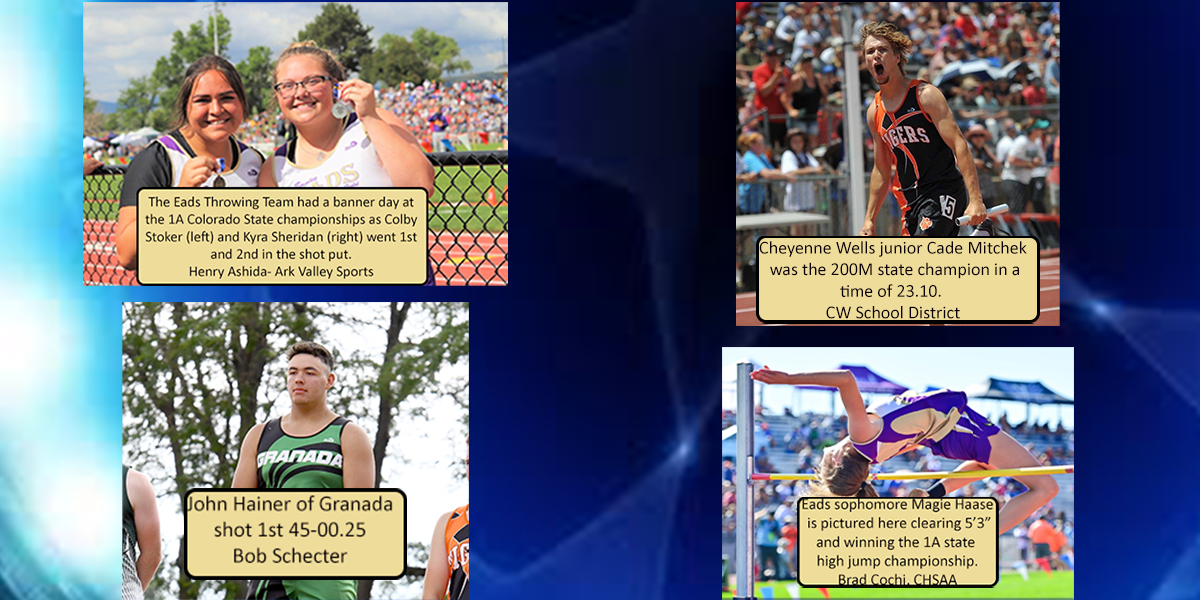 Over the summer those who document the sports achievements at Eads High School will have to update their wall banner that denotes Track & Field state champions as Eagle Nation got, not one, but a rare two state champions over the weekend at Jeffco Stadium in Denver.  Sophomore Maggie Haase will join her mother, Duff Liebl Haase on the banner as she became just the second state high jump champion in school history.  The first one was her mother a generation ago.  Senior Colby Stoker will be added onto the banner, as well, and joins a long line of outstanding Eads throwers down through the years.

Eads Head Coach Stephanie Bohlander was excited for her athletes, “We are so lucky with the kids we have.  Their dedication and love for their school, and their competitive upbringing has been key to their success.  You just can’t fake good kids.”

The Eads girls, led by Haase and Stoker, placed 6th overall as a team.

Haase would win the high jump by blowing away the 1A field of competitors.  She would clear 5’ 3” in her first ever state track meet.  The sophomore nearly got over 5’ 4” so it will be fun to see how she develops in her last two years of competition.  Stoker, although not quite hitting her best throw of the season, was stellar in the shot put winning the event with a best throw of 38’ 2”.

In an amazing twist of luck, fellow shot put team mate, junior Kyra Sheridan, shocked everyone as she hit a big throw on her last attempt of 35’ 5” and slipped into the state runner-up position.  Eads would bring home silver and gold in the shot put and set a standard few schools have had in the throwing arena.

Haase and Stoker also earned points in their other individual events.

Haase placed third in the triple jump, not hitting the jumps she had recorded earlier in the season.  However, her best attempt on that day was 33’ 9.5”, a very good mark to be sure.  In an interview with CHSAA, Haase showed true sportsmanship when talking about her bronze medal, “       .”

The sophomore also qualified for state in the 100M Hurdles, an event she only picked up a couple of months ago and was in the finals finishing in 7th place in a time of 17.95.  She will only get better in the years to come.

Stoker was also strong in the discus event placing 4th.  She would use her best throw of 112’ 9” to earn the 4th place points. 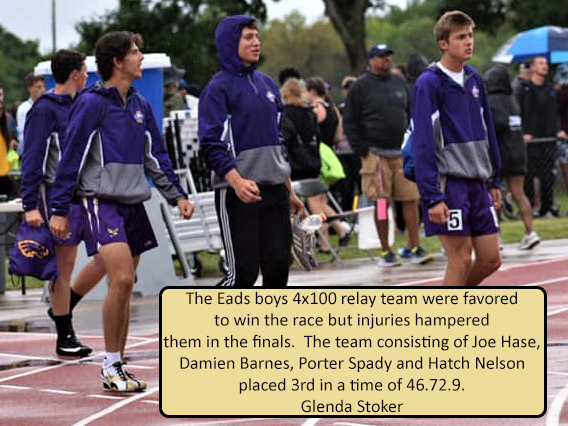 The Eads boys’ track team struggled toward the end of the season as a combination of injuries and fatigue affected the dual participants who also went deep into the baseball post season.  Earlier in the season, the Eagles had two relay teams that showed strong promise with the 4x100 relay entering the state meet with the fastest recorded time in the season.

In addition to being a member of the 4x100 and 4x200 relay teams, Damien Barnes was a contender for a strong finish in the triple jump and long jump.  Unfortunately, he injured his hamstring a couple of weeks ago.  He was forced to scratch out of the jumping events and would only try to run the leg of the 4x100 relay.

The Eads boys had a strong showing in the 4x100 relay, running in a downpour of rain, with freshman Porter Spady, Barnes, Hatch Nelson and Joe Haase leaving it all on the track.  The foursome would finish in a time of 46.72, good enough for a third-place medal.  It wasn’t their best time, but it was decent considering Barnes’ injury and the weather conditions.  Springfield got second in the relay beating Eads by .01 hundredths of a second.

Senior Brad Musgrave represented a feel-good success story as he made the podium in the shot put, placing 7th with a best throw of 38’ 1”.  Granada’s John Hainer would win the shot put with a massive toss of 45’ .25”.

Bohlander was thankful the long season was over but was overall satisfied they made it through the season, “When you look back over our season and see the highs and lows, they all are worth it when you look over our weekend.  Every kid that went from EADS was on the podium and tasted success.  Medaling, posting best times and distances, and becoming a true champion are pretty awesome accomplishments.”

The area was well-represented with outstanding performances as the Cheyenne Wells boys finished in third place overall as a team.  Leading the way for the Tigers was junior Cade Mitchek who had a stunning finish in the 200M open winning the championship in a time of 23.10.  Mitchek just nosed out Granada’s Dominic Coleman who placed second in the 200M in a time of 23.37.

Cheyenne Wells also had a state championship in the 4x200 relay where Mitchek was the anchor.  Other team members were Perry Chadwick, Carson Noe and Evan Worley.  Their relay performance was stunning with Mitchek hitting the string at the 1:36.3 mark.

Granada would finish 7th in the 4x200 relay in a time of 1:40.18.  The team members were Hernandez, Garcia and Yanez with Coleman anchoring.

Granada had a state champion in sophomore John Hainer in the shot put.  The Bobcat threw an impressive 45’ .25” and blew away the competition by more than 5 feet to win the event.  Cheyenne Wells’ Wyatt Ball placed 3rd in the shot put behind Hainer with a toss of 38’ 1”.

The Granada girls had a nice 4x100 relay team placing a solid fifth in a time of 55.62.  Team members were Quintana, McGee, Valenzuela and Herrera.

The past weekend wraps up Season D and the end of the tumultuous CHSAA sports year 2020-2021.  This is one that no one in their right minds would ever want to go through again.  Bohlander keeps it all in perspective as she will now have a well-deserved break before school resumes in the fall, “This has been a season for the record books to be sure.  Nothing has been easy or even resembles any other season before it.  It was the time of year, schedules, training regimens, health issues and for some schools even numbers of athletes that even bothered to go out for Track & Field.  We say a heartfelt see ya soon to awesome seniors and hope nothing but happiness and success, and we have a very talented group returning.  It is such a blessing and I’m so proud to be an Eagle!”