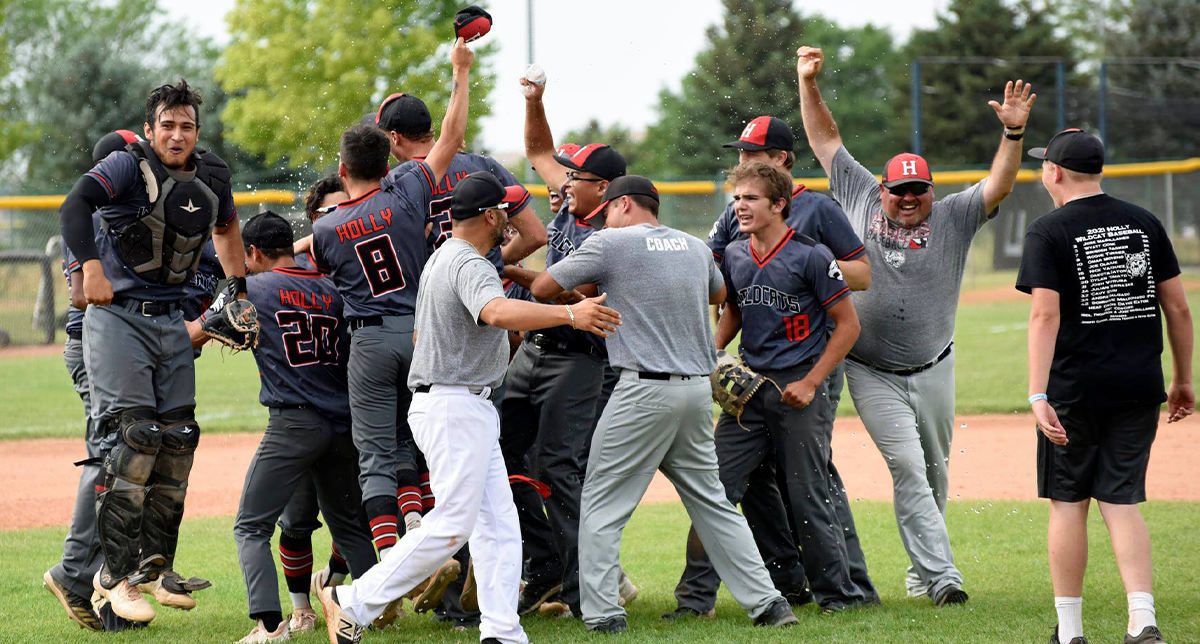 The 2021 Class 1A state baseball championship game turned into a classic battle between the No. 3 seed Holly Wildcats and the No. 1 seed Flatirons Academy at University High School on June 23 in Greeley.

One swing proved the difference between two teams battling for a championship.

In the top of the sixth and with one out, Holly’s leading hitter Jose Magallanes came to the plate and blasted an 0-1 pitch over the left-field fence to give his team a 1-0 lead. It was the 10th home run of the season and ironically it broke the school record that was previously held by his dad Jose who had held the mark for 22 years. His dad also served as an assistant coach on the team.

“Unbelievable,” Magallanes said. “I just can’t believe I did it, and on a big stage like this in the state championship. It was crazy.”

The two pitchers combined for 26 strikeouts with 13 each and allowed just four hits.

“It’s surreal,” said Parker in an article by CHSAA.com. “It’s just crazy. It’s madness. It’s all your best friends all over you. It’s the best feeling you can get.”

Holly was facing Flatirons Academy for the third time this season. The two teams played in a doubleheader on June 5th in Holly.

Parker did not pitch in those games as Holly coach Dayne Eaton was saving him for a possible showdown with Flatirons for the state title.

“We felt we had the mental advantage saving Brigden for this game and we had not used him when we met for a double header earlier in the season,” explained coach Eaton. What was unexpected was the pitching performance of Rowan. He mixed his change-up and curveball with an 80-plus mph fastball. We hit him hard the first time we played in a 13-4 win, but he was much improved this time around. Flatirons Academy have five kids that play travel ball every fall and summer. This was the majority of players that won the 2019 1A title.”

In the first inning, Holly had a runner at first after a walk but no other base runners for either team.

Holly mounted a threat in the second inning on the strength of a single and two stolen bases for Dakota Eaton, but he was left stranded.

In the bottom of the second, Flatirons had its best opportunity to score. They led off the inning with a double and followed with a single moving the runner to third.

With runners at second and third, Parker worked out of the jam to strike out the next three Bison batters to put out the fire.

In the third inning, Holly had a baserunner on after a hit-by-pitch but could not score as Rowan struck out the next three batters.

With two outs in the bottom of the third, Parker gave up a rare walk (he had only three on the season). The runner was later thrown out attempting to steal second to end the inning.

The fourth inning was more of the same, as Parker led off and reached on an error, but was picked off at second base. The next three Holly batters were retired in order.

With two outs, Flatirons threatened in the bottom of the fourth.  The Bison hit back-to-back singles before Parker registered his eighth strikeout to end the inning.

In the fifth, Holly managed a single but left the runner stranded.

Parker retired the Bison in order in the bottom of the fifth with two strikeouts and ground out with the score still locked at zero. 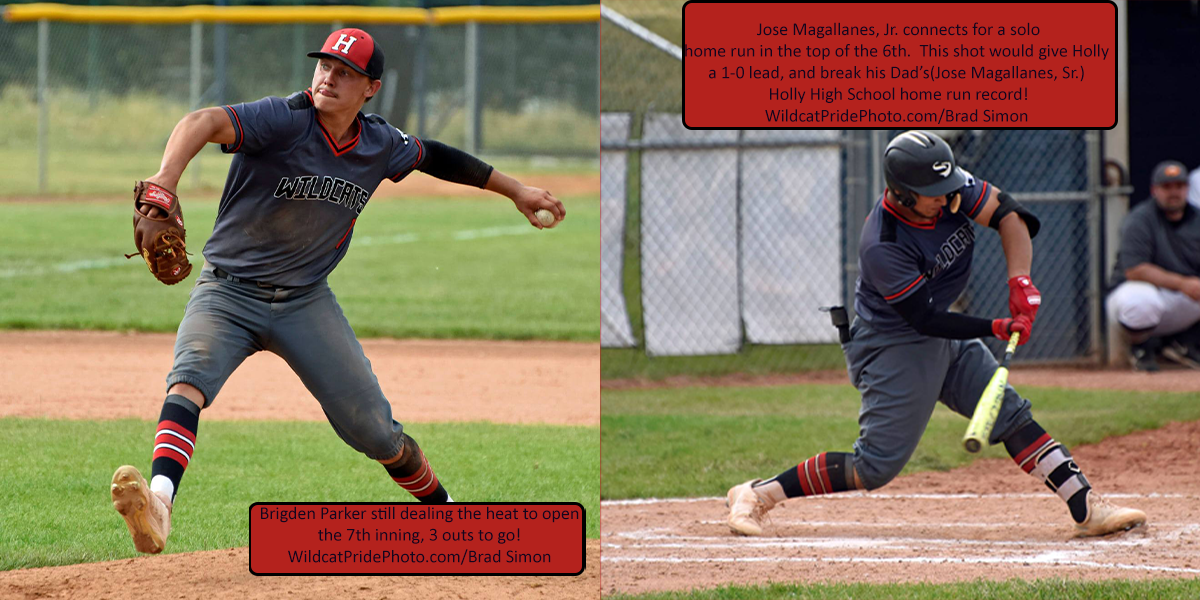 The top of the sixth started with a strikeout for Holly, before Magallanes stepped into the box and smoked a monster shot to left-center field. As he trotted around the bases, he was welcomed home by his dad whose high school home run record had just broken.

Parker followed with a single, but after a pop-out and a fly-out, the Wildcats were six outs away from capturing the title!

In the bottom of the sixth, Flatirons went three up and three down following a groundout, a strikeout, and another groundout.

Holly went three up and three down in the top of the seventh.

Going in the bottom of the inning, the pressure was squarely on the shoulders of Parker to get the final three outs.

Holly fans got a little nervous when the leadoff batter reach on an error with the potential tying run at first.

Parker showed he still had gas in the tank. He responded to strike out the next two batters.

With just one out away from a state title, the next batter for Bison hit a solid ground ball to third baseman Wyatt Cook was cleanly fielded the ball and made a perfect throw to Dakota Eaton for the third out.

A wild celebration broke out for the Wildcats as they had just clinched their first state title since 2016.

The Wildcats (16-4 overall) reached the title game with a 9-1 victory over the No. 2 Merino Rams.

Homeruns from Parker and Magallanes sparked the win to set up the showdown between Holly and Flatirons Academy, who ended the season with a 12-3 record.

In recapping the championship season, Coach Eaton summed it up this way.

“We played some tough teams early with losses to 4A Pueblo Central (14-1) and 2A Limon (3-2) in the Rocky Ford Tournament and three days later a loss to 2A Monte Vista (3-1),” Eaton said. “We just felt like we were not playing up to our potential. It humbled us. We had some bad body language and were not in a good place. Jose Magallanes, Wyatt Cook, and some veterans called a team meeting an hour before practice.

“They pointed out some negative things that would not be tolerated on our team. It was a total turning point of the season, from that point on. No more pouting, backbiting – we hustle, wear baseball pants to practice, and show up on time.  The mindset changed. When players hear it from teammates, it sunk in.

“We went 13-1 to finish the season. The lone loss was to Flatirons, 1-0 on June 5th.  We had a competitive league and some close games with Stratton, Eads and Granada helped prepared us for high intensity games at state.  We finished the season hitting 22 home runs which was a team record.”

This year’s team will lose some key seniors to graduation.

“Jose Magallanes is the most humble superstar I have ever met,” praised Eaton. “He works well with the freshmen and sets an example for anyone who wants to get to the next level. He set the school record for home runs and finished the year batting .702!”

“Brigden Parker found the importance of the weightlifting program and was the most dominant pitcher in Class 1A.  He also belted seven home runs,” Eaton lauded. “Both of those seniors should be the Class 1A Players of the Year.”

“Senior Wyatt Cook was the perfect teammate,” added Eaton. “He fought through an injury to do whatever he could to help the team. It was fitting for him to field and make a perfect throw from 3rd base for the final out in the championship game. Our other seniors Omar Moreno and Joe Olague did not start at state but were ultra supportive during the whole tournament.”

Eaton added that the team appreciated all the support from the parents, fans, and the community.

“I want to thank them for everything,” he said. “It was a good day to be a Wildcat.”