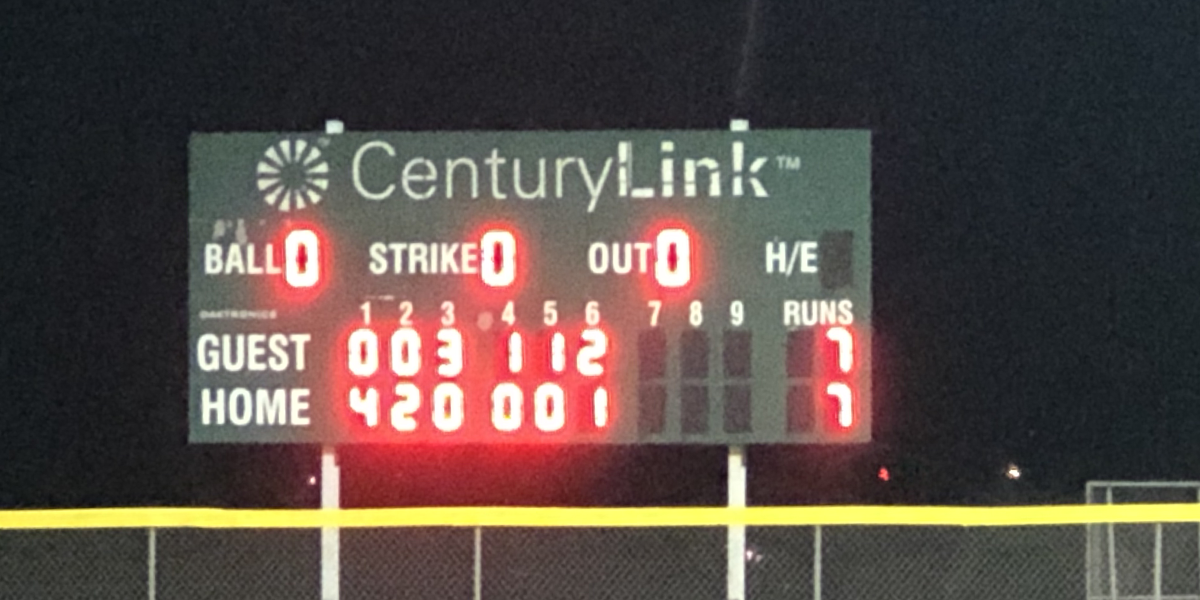 SOUTHERN PLAINS 9U IN DEADLOCK FOR THE STATE CHAMPIONSHIP

As of this writing on Monday afternoon the Southern Plains 9U baseball team, consisting of all Eads kids except one Kit Carson player, Brentley States, who has always played with Eads, is in a 7-7 perpetual tie with the East Central 9U All-Stars and going into extra innings with the game on pause due to circumstances you couldn’t make up in a novel.

Over the weekend Lamar hosted the Colorado State 9U Babe Ruth Tournament with the winner advancing to Minnesota to the Regional 9U Tournament.  Throughout pool play the Southern Plains group dominated all the teams winning in three straight pool play days over East Central All-Stars, 12-2, Lamar All-Stars, 26-11, and the Centennial All-Stars 7-1. 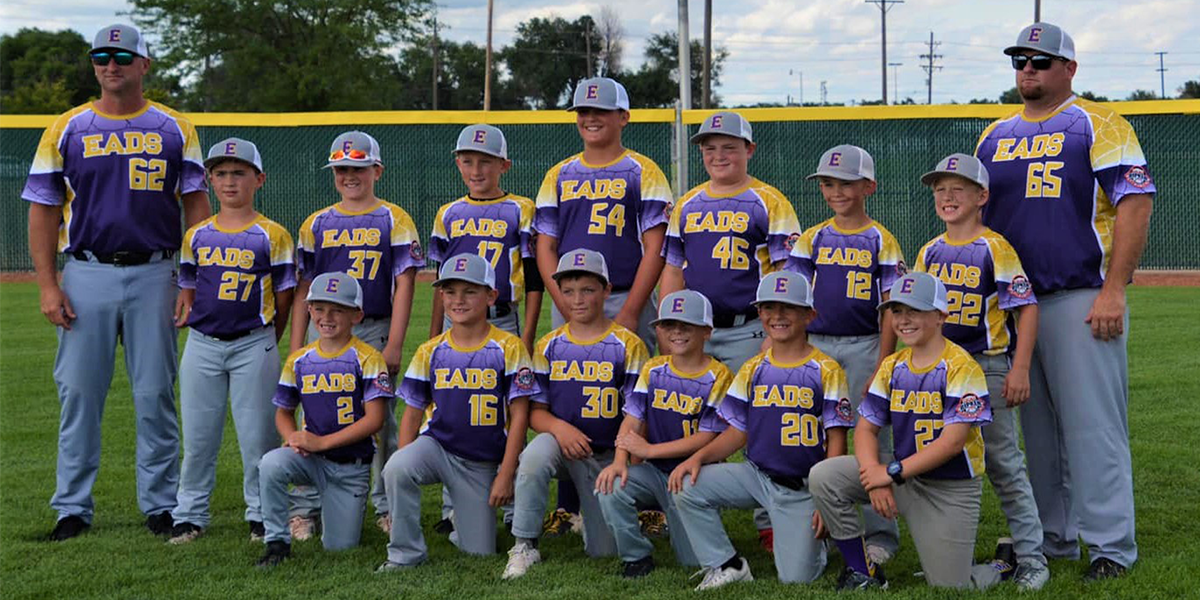 On July 4th the tournament bracket began with Southern Plains sitting at the top of the heap on the bracket with a perfect record.  They would take on the Lamar All-Stars in the semifinals, loser elimination, game on Sunday morning.  SP controlled the Lamar All-Stars to a major decision winning 15-5 and advancing to the state championship scheduled for 5:00 pm on July 4th.

In the championship game, Southern Plains would jump out to a huge 6-0 lead over the East Central All-Stars who had defeated Centennial in the semifinals.  However, 4 throwing errors behind the runner cost SP big and allowed the East Central boys to creep back into the ball game.  After six full regulation innings of play over nearly 2.5 hours of action the Southern Plains group found themselves down to their last at-bat and trailing by a run.  Will Barnett would start things out with a walk and then stole second and third waiting for Chael Cordova to come to the plate.  Cordova hit a towering fly ball double scoring Barnett and tying the score back up.

With one out all Eads needed to do was bring in Cordova but the next two batters committed outs as huge thunderclouds quickly came rolling in.  As the teams prepared to go into extra innings, the clouds opened wide in a deluge sending everyone scrambling for their cars and the little players huddling in the dug outs with their equipment.  It rained hard for nearly an hour obviously stopping all play for the night due to the field condition.

That would mean that East Central, consisting of players from Limon, Flagler, Stratton, Burlington, Goodland and Colby would have to stay in Lamar for an extra day.  They refused and this created a long meeting between coaches, umpires, field representatives, and Babe Ruth officials that were on site.  As another storm came up some 30 minutes later, there was still no decision made as neither team would budge on giving concessions.  As of this writing, there is no word as to how this 7-7 tie will be satisfied and the Colorado 9U baseball champion crowned. 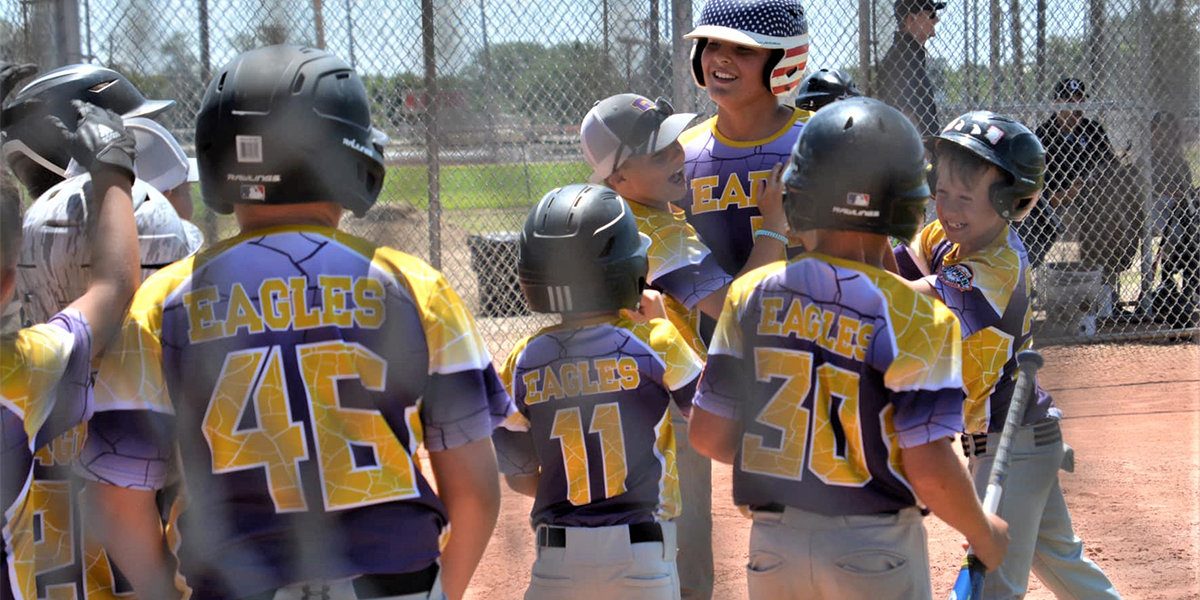 The Southern Plains 9U team clebrates when Chael Cordova comes home after hitting a monster home run over the centerfield fence at the state 9U tournament in Lamar.
-Braylynn Eder photo

In the opening game of the tournament against East Central, the Southern Plains group came out victorious thanks to an eight-run third inning boost.  During that inning SP got strong offensive attacks from Madyx Hough, Brantley Buller, Quinn Britten, Will Barnett, Jaxon Bohlander and Chael Cordova who each had RBIs in that stanza.

Overall, the offense scattered 12 hits around the field including 2 from Liam Eder and Bohlander.  Eder, Bohlander and Cordova would score two runs each.  Eder and Hough had two stolen bases apiece, while Mason Sierra, Cordova and Barnett each had one apiece.

On the mound for SP was Brantley Buller who went the distance giving up just 2 hits, 2 runs, walked just one and struck out 7 batters. 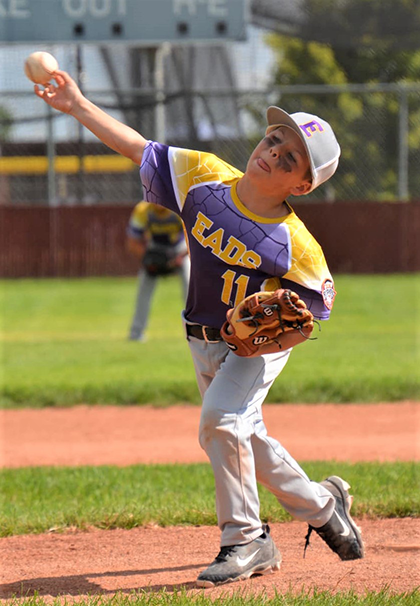 Liam Eder was on the mound for Southern Plains heading into the suspended extra innings in the 9U State Championship game.
-Braylynn Eder photo

The next day Eads took on the Lamar 9U All-Stars in pool play and won in a major decision, 26-11.  Barnett went 4-for-4 on the day and walked twice scoring 3 runs.  He would hit a triple, a double and two singles to tally 3 RBIs for his teammates.  Cordova went 3-for-4 on the day scoring 3 runs and contributing 3 RBIs.  Buller also had a great day at the plate with 2 hits, including a triple, 4 RBIs and scored 4 runs.  Southern Plains had 15 stolen bases including 3 apiece from Barnett and Bohlander, 2 apiece from Cordova, States and Buller, and one apiece from Jax Cordova, Eder and Sierra.

Three different pitchers saw the hill for Southern Plains including Hough who went one inning giving up 2 hits and two runs; Eder for an inning who gave up 1 hit, 2 earned runs, and two strike outs; and Bohlander who finished the last three innings giving up just 2 hits on 2 earned runs and striking out 5 batters.  Between the three pitchers, 13 batters gained free bases.

On Saturday against the All-Stars from Centennial it would be Cordova on the mound for Southern Plains.  He would help himself out in a big way as the 9-year-old hit a massive home run out of the park straight to center field that was 230 feet out.  Barnett was aboard at the time for 2 RBIs to Cordova.  Cordova would pitch for 2 innings giving up no runs and only 1 hit, walking one, and striking out 5.

Sierra and Buller each put in some time on the hill to finish the 6 innings of play.

Southern Plains struggled against the Centennial pitcher getting only 2 hits but found other ways to get on base with 6 walks and a hit-by-pitch.  Eder and Barnett both scored 2 runs for Southern Plains.  Eder would have three stolen bases; Barnett and Buller had two steals apiece, while Luke Barnett stole one base in the game.

The three wins pitted Southern Plains against the Lamar All-Stars in the semifinals where they won, 15-5.  Cordova was still hot with the bat driving in five runs.  Chael drove in runs on a single in the first, a double in the second and another double in third. 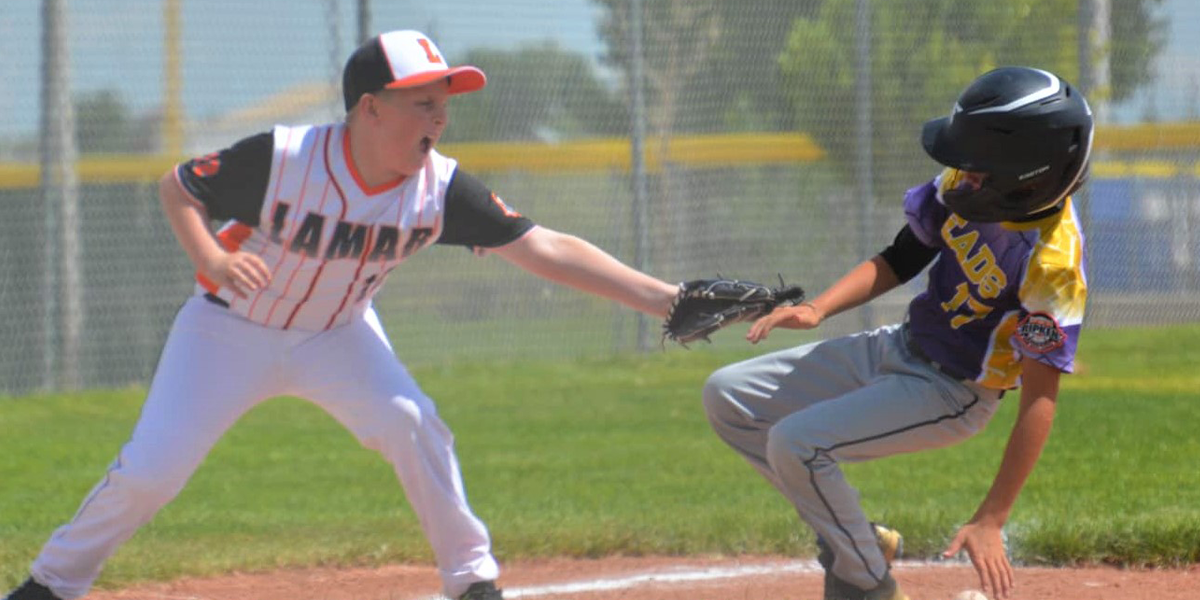 Will Barnett knocks the ball loose from the Lamar third baseman as he slides into third.
-Braylynn Eder photo

Hough started the game on the bump for SP and lasted two-thirds innings allowing three hits and three runs while striking out two and walking zero.  Eder earned the win for SP.  The righty surrendered two runs on two hits over three and a third innings, striking out six and walking one.

Barnett and Cordova had multiple hits in the win with Barnett going 2-for-2 with one walk 3 runs and 3 RBIs; while Cordova was 3-for-3 with 2 runs and 5 RBIs.  Eads only needed 6 team hits to score the major win.

That win set up the excitement of the state championship that is still sitting in limbo, 7-7 at the top of the 7th inning.  Southern Plains managed 5 hits against the three pitchers from East Central while East Central so far has only 3 hits.  However, the score reflects the four errors by Southern Plains.

Cordova and Buller did well on the mound as they went 2.0 and 3.1 innings respectively with each walking five and each striking out five batters.  Eder was scheduled to take the hill to start the top of the 7th after pitching .2 innings in the top of the sixth.  Thus far Eder struck out both batters he saw.