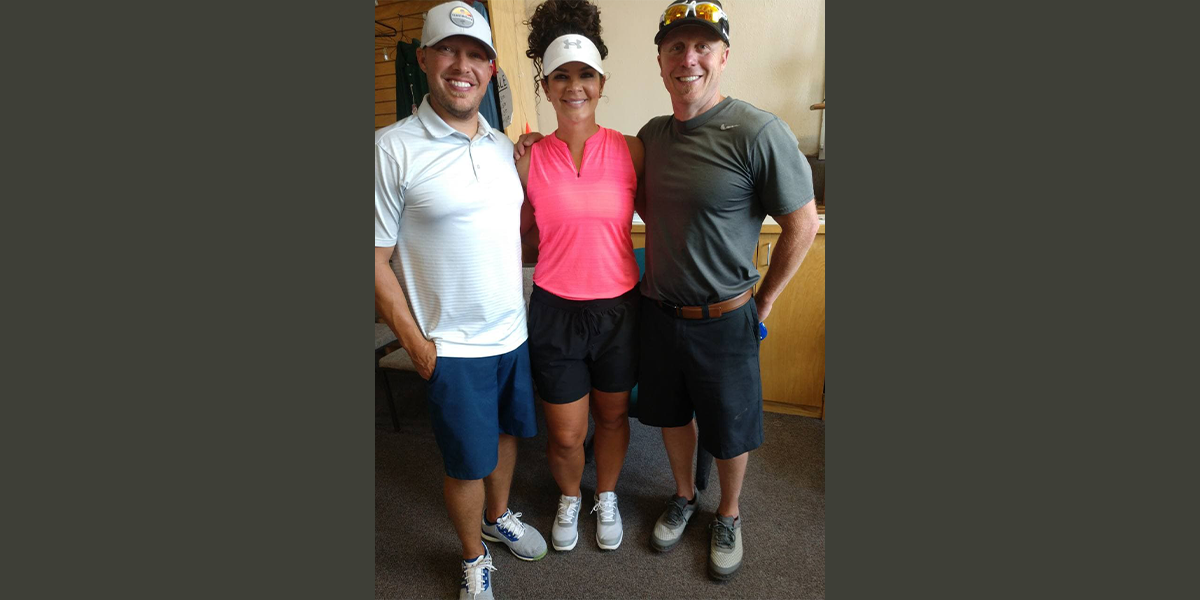 Although there was a lot of things going on last Saturday that kept many die-hard golfers away, the annual 2-Man-1-Woman Golf Tournament enjoyed a good number of trios competing at the Eads Golf Course.  Three flights of golfers squared off in this tournament with the team of JaLynn Oquist, Sean Oquist, and Chad DeBono leading the charge to win the Championship Flight.  Their -9 under 63 was the best score in the tournament by three strokes.

The rules for the 2-Man-1-Woman golf game are a little different, obviously, than just in a regular tournament.  The rules required that each player’s drive had to be taken at least twice in a nine-hole round of golf, after which the team could play the best ball during the hole.  Each team played two rounds, or 18 holes during the tournament.

The Oquist/Oquist/DeBono team came in with a scorching -3 under 30 in the front nine of the tournament.  That 30 carried them through a little bit of choppy waters in the back nine.

The trio of Kim Richards, Tom Richards and Larry Gifford came in second place in the tournament after a slow front nine shooting a -2 under 34.  That score put them in third place after the front nine was finished and also tied them with the entire rest of the championship flight field---all who also came in with a 34.  But, the Richards/Richards/Gifford team shot one of the best rounds of the tournament on the back nine and used a -4 under 32 to finish in second place---and in the money.

Going into the First Flight it would be the Simla/Hugo trio of Shellie Hurtado, Leo Hurtado and Luke Bugenhagen who grabbed the top position and the money using the best round of the tournament on the back nine.  Their -5 under 31 was a consolation for a trio of excellent golfers who had a tough opening round of an even par 36 which took them out of the Championship Flight.

The runner-up spot in the First Flight, an obviously competitive flight, was the trio of Lori Richardson, Monte Richardson and Trey Eder.  They shot a decent -1 under 35 on the front nine but it was their back nine that got them in the money shooting a -4 under 32.

Joni Liebl, Joe Haase and Jay Haase won the Second Flight with an overall +3 over par 75 for the 18 holes of golf.  The trio used a back nine even par performance to slip in and win the flight.

Second place in the Second Flight went to Charla Ferris/Dave Wall/Tom Rhodes.  They started out slowly shooting a +4 over 40 on the front nine but finished strong improving five strokes for a -1 under par 35 on the back nine.  Their overall score was a +3 over 75 on the day.

The course and putting greens at the Eads Golf Course are in the best shape they have been for some years due to an abundance of rain.  The next tournament will be the first annual Jimmy Patterson Memorial Tournament, a 2-Man Scramble Golf Tournament for two days on July 30 and July 31.