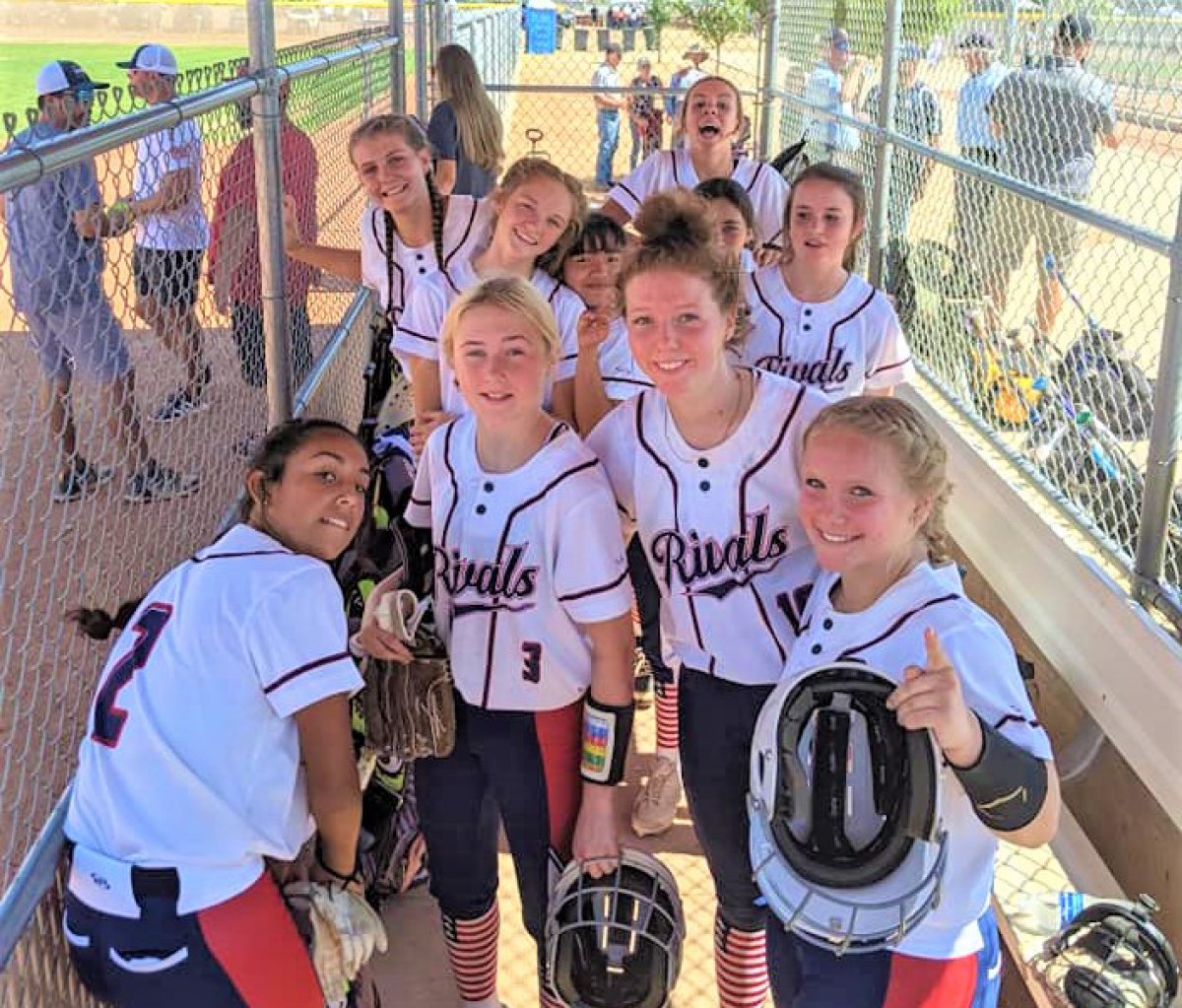 In the bottom of the final inning of the championship game at the Red White & Boom softball tournament in Lamar over the 4th of July holiday, the feisty 14U Rivals softball team forced enough pressure on the Ark Valley Bandit’s 18U team to come from behind and win the game and the championship, 7-6.

The Rivals were down 6-5 going into their last at-bat with Bailey Sierra starting the winning rally when she pulled a walk as the first batter of the inning.  A line out to second for one out kept Sierra on first base.  Lexi Shotton was next up and took a ball while Sierra stole second base.  On the next pitch Shotton was hit by the pitch putting runners on first and second with one out.  Khloe Fernandez then singled to the pitcher and loaded the bases.  Dixie Bitner was the next batter up.  On the first pitch to Bitner a wild pitch allowed Sierra to come home and tie the game.  Shotton advanced to third and Fernandez to second.  Bitner was then hit by the pitch juicing the bases for the second time in the half-inning.  On the first pitch to Anna Wollert the pitcher again threw a wild pitch and Shotton hustled in to slide for the win turning her body and kicking the ball out of the catcher’s glove in the close play.

The 14U Rivals have been playing in numerous tournaments throughout the summer traveling to Kansas, Pueblo, La Junta, and Lamar.  They haven’t won them all, but they’ve won most.  Even better, they are turning into a group of impressive ballplayers.  Some of these players still qualify for the 12U division but have been playing up in the 14U, 16U and 18U tournaments.

In the Red White & Boom tournament in Lamar where only local teams from La Junta/Rocky Ford, Lamar, and the Rivals, consisting of players from Eads, McClave, Wiley and Lamar, were represented, the Rivals went undefeated against older teams through pool play defeating their nemesis, Ark Valley Bandits, 7-6 in the first game of the tournament.  They then defeated Lamar, 17-9, in the second game of the pool play.

In the first game of the tournament on Saturday against the Bandits the Rivals were down 6-4 in the top of the fourth inning when Bitner homered on a 2-0 count, scoring three runs and taking the lead.  Anna Wollert was in the circle for the Rivals and would hold off the Bandits to get the win.  Wollert went four innings, allowing seven runs on ten hits and striking out eight.

The Rivals scattered nine hits around the field in the 7-6 win with Sierra and Bitner each collecting multiple hits.  Bitner had 4 RBIs and went 2-for-2 on the day, walking once.  Sierra was also 2-for-2 and scored twice.  RBIs also came from Mel Salcedo, Alexa Weber and Shotton.

Against Lamar the Rivals dominated at the plate with 13 hits on their way to a 15-run first inning.  Wollert was 2-for-2, scoring twice and adding 2 RBIs.  Salcedo and Zoe Martinez also went 2-for-2.  Salcedo scored two runs and added an RBI, while Martinez duplicated that effort.  The Rivals stole 9 bases with Maddie Wertz and Wollert getting two thefts apiece.

Sierra went the distance for the Rivals as the game was called on a major decision after 3 innings.  Sierra would give up 7 hits and 8 runs, striking out 1 batter.

The Rivals were expecting a tough challenge from Ark Valley in the semifinals game, but they easily outpaced the Bandits scoring a major decision 10-0 after the third inning.  Wollert had the nod in the circle and gave up only 2 hits and no runs, striking out 4 for the win.

The Rivals had 9 hits in the game including Wollert going 2-for-2 and adding 4 RBIs by using 2 doubles on the day.  Kara Wilson and Sierra both hit a triple apiece.  Wilson was 2-for-2 with an RBI.

The Bandits had to go back to play Lamar on their loss to the Rivals and the Rivals got to rest waiting to play the winner.

It would be the Bandits in the championship, and they gave the Rivals all they could handle with their ace in the circle.  The Rivals jumped on the lead in the first inning scoring 3 runs.  But slowly, the Bandits would come back into the game getting a counter in the second and another in the third.  The Rivals added two runs in the bottom of the third to lead 5-2 going into the last inning.  In that inning, the Bandits put together a 4-run push in the top of the inning grabbing the 6-5 lead late.  That would set up the exciting finish that would result in the championship for the Rivals.

Sierra had a strong outing for half of the game as she only gave up 3 hits and two runs but started walking batters late in the top of the second.  Wollert would take over in the circle for the last two innings and get the save by giving up 4 hits and 4 runs and striking out 2 batters.  The defense did the rest.

In the championship game Fernandez and Salcedo had four of the team’s 7 hits in the game.  RBIs came from Salcedo, Wilson and Martinez.  The aggressive baserunning kept the pressure on the Bandit defense and was key in the win as the Rivals got four stolen bases including two from Hernandez and another from Wollert and Sierra.

Over the past weekend the Rivals were still at it in Lamar playing in pick up games with La Junta, Pueblo and a West Texas team.  They have had an impressive summer of exciting softball.  Soon they will return to school, too young yet to play high school ball, but with dreams in their heads of moving to the next level of play.