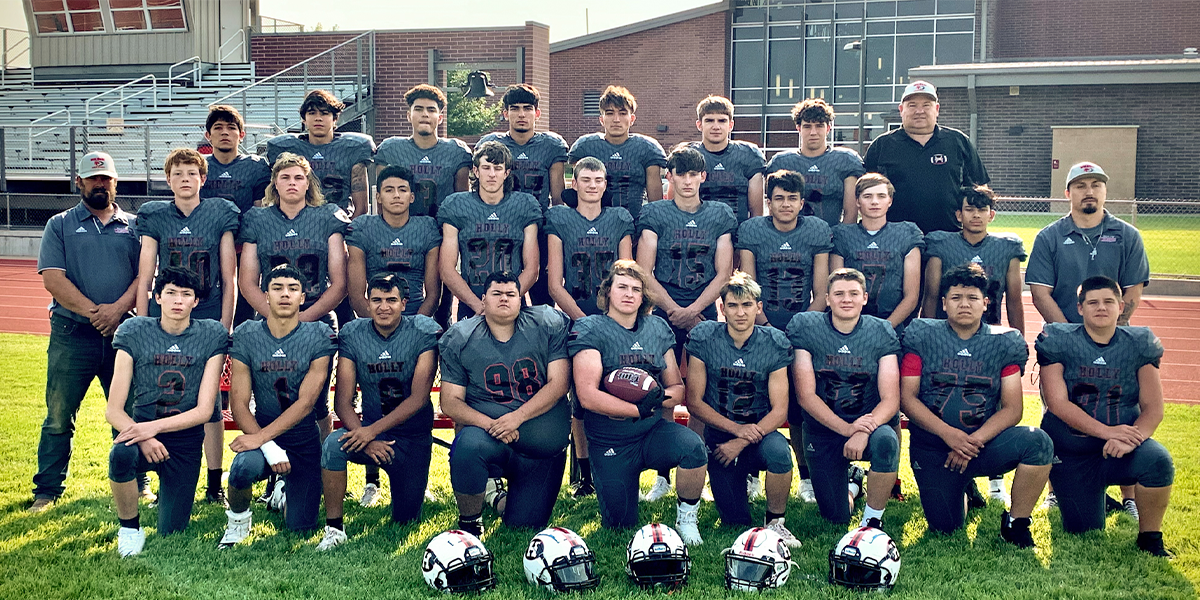 Last year was a frustrating season for the Holly Wildcats football team.

The Wildcats played a limited number of games due to Covid issues involving other teams on their schedule.

Holly missed the 8-man state playoffs a year ago going 2-3.

The Wildcats won their first two games in a non-league contest with Haxtun (48-44) and a league win against Wiley (49-14).

Things went downhill from there.

The Wildcats lost a pair of non-league games to defending state champion Sedgwick County (56-8) and Wiggins (46-14).

In what proved to be their final league game of the season, Holly lost two-point nailbiter to Fowler (16-14).

“Last season was a struggle,” said veteran head coach Dayne Eaton. “We missed the playoffs because we didn't have enough games because of Covid cancellations. Many teams boast that Covid had little effect on their season but with three quarantines we had a very difficult time getting consistency and practice together. It was very frustrating because we never had a Covid case on our team or staff but paid the price with three cancellations and a missed playoff opportunity.

So, the anticipation is high as the Wildcats should contend for the Arkansas Valley League title and aim for a state playoff berth this year.

Eaton welcomed 33 prospects out for football.

“That’s unbelievable numbers for our program,” he said.

Holly returns a ton of talent on both sides of the ball.

The Wildcats will be sparked by Dakota Eaton who is considered one of the top quarterbacks in 8-man.

“Something that is going help Dakota was being around a strong group of seniors in baseball,” said Coach Eaton about his son. “We ended up winning the Class 1A state baseball championship in the spring. Winning breeds winning and he’s the kind of kid that will do whatever it takes to help the team. He’s definitely not a kid that looks at stats or cares about himself personally.”

The Wildcats like to throw the ball when necessary and they will possess the weapons.

On defense, Holly returns 8 of their top 10 tacklers.

“Defense is an area where need to work on,” said Eaton. “We have to be able to stop teams in the red zone.”

Eaton noted that brothers Daunte Maldonado, a junior, and Dominique Moldonado, a sophomore, were a couple of key players that sat out last season with injury. Daunte (5-9, 140) will see action at running back and safety while Dominique (5-9, 155) plays tight end and defensive end.

Looking at the Arkansas Valley League, Eaton feels the teams to beat will be Hoehne, Crowley County, and Fowler. Team on the rise will be McClave and Las Animas. Wiley and Springfield will have a new coaches this season.

In the preseason rankings, Holly is ranked No. 6 and Fowler is No. 9.

Holly will face a nine-game schedule with seven conference games. The league winner earns an automatic berth to the state playoffs.

The Wildcats will play two preseason games when they host Swink on Friday, Aug. 27 and entertain Akron on Sept. 3.

“Depth on offense and depth on defense is going to be our strength,” added Eaton. “Right now, our overall attitude is all about getting better every day and doing what it takes to get to our goals. Every Friday night is going to be a fight in our league.”