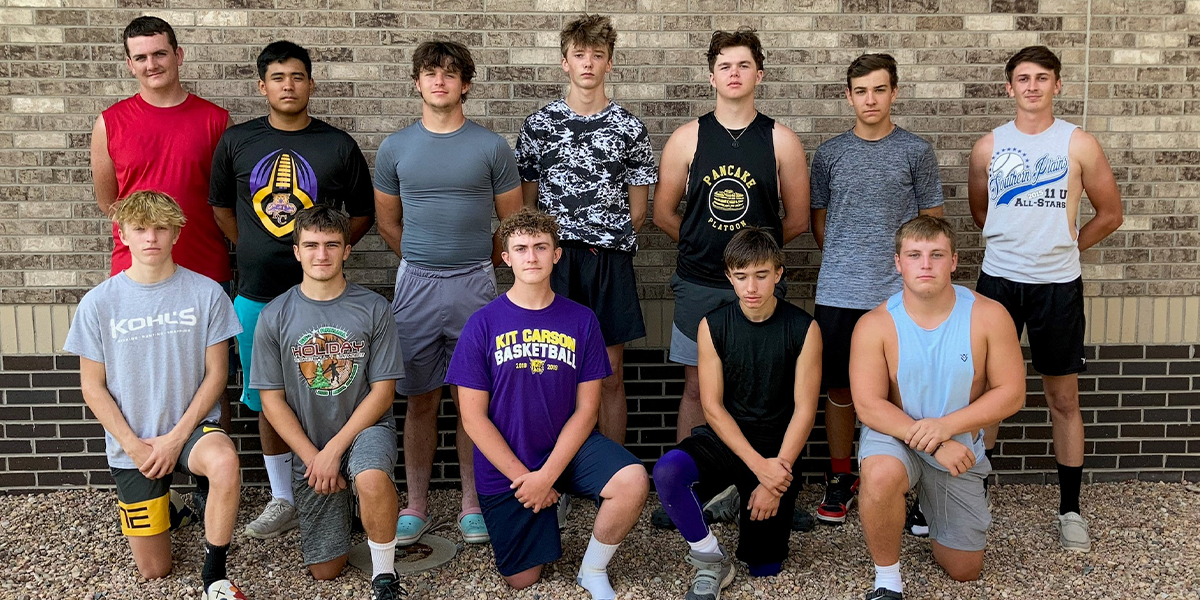 Curt Connelley is in his 5th year as the head coach of the Kit Carson Wildcats’ football program.  He knows that although the Wildcats lost a key senior, Sullivan Farmer, to graduation last year that his team this year is perfectly capable of competing.

Farmer led the team in rushing with nearly 450 yards and in total yards racking up 800 during his senior campaign.  He was a versatile player that could hurt you on the ground, from the air, or by throwing for a touchdown.  He was even a good kicker when called upon.  Defensively, Farmer was one of the top tacklers with 48 in 2020.

The Wildcats struggled a little bit last year with the Covid quarantines and missed a couple of scheduled games because of it.  They were 3-2 on the season and made it to the quarterfinals where they lost to the eventual state champions Fleming.

Connelley says, “I believe we can make it back to the state playoffs.”

The Wildcats will be back on the field with five starters from a year ago.  They include senior Danial Arnold who is a 3-year starter.  Arnold had 320 yards rushing a year ago.  This year he’ll be on the end offensively and at the linebacker slot on the defensive end of the ball.

Senior Brett Mayhan will return and will take up the quarterback slot and also play on the defensive side of the ball.  Mayhan completed 363 yards in passing a year ago.

The Wildcats will also have the services of the Mitchek twins who return to the gridiron.  Alex and Paul are now juniors and will be key players for Connelley.  Paul Mitchek had 461 total yards, 393 rushing, last year and led the team defensively with 49 tackles.  Twin Alex will take on the End and Defensive End positions on both sides of the ball.  He had 42 tackles in the 2020 campaign.

Junior Alex Arroyo and sophomore Keaton Marriott will also be assets for Connelley’s group this year.  Marriott will play running back and play defensive lineman.  Arroyo will anchor the center.

Of his team, Connelley was complimentary, “We were a young team last year with very little playing experience. With only having 9 guys on the roster last year we had to have them play multiple positions. I believe that fact caused a lot of uncertainty at times, and I think for this team now having 12 guys I'm hoping it will take pressure off and build confidence in the players that had to play multiple positions and now they can focus on 1 or 2 positions, unlike last year.”

Connelley knows it’s vital he gets his young guys going as the competition in the league is some of the best in the state, “Our league is stacked this year with Cheyenne Wells making it to the Semifinals last year, losing one senior and getting a healthy Cade Mitchek back. Granada also made it to the semifinals last year and they still have a good quarterback in (Dominic) Coleman and a big strong running back in (John) Hainer.  Eads lost a great athlete in Damian Barnes but still have a lot of starters returning who have had quite a bit of quality playing time. Cheraw had a successful season last year which I believe they will built on, and just like the teams I've mentioned before only lost one or two seniors and they also will be returning a bunch of starters. Walsh is in a rebuilding year, but they are a team that is always physical and a tough team to beat.”

The Wildcats will travel to Cotopaxi in their opener on Saturday, August 28th at 1:00 pm.  They then will be tested in the annual Cheyenne County shoot out against county foes Cheyenne Wells in the Wildcats’ home opener on Friday, September 10.